Any plans for a Drag Knife option?

I’ve been searching for a clean way to cut paper, fabric, etc. with the Shapeoko.
Donek Tools offers a drag knife set-up which appears to be an easy way to achieve this.

I think I’ve seen someone do this on YouTube. I can’t remember who it was.

Inventables does not have any plans to support a drag knife in the near future. We have our hands full right now with supporting carving. Lot’s of new stuff coming down the pipeline.

What kind of things are you looking to cut? Mostly paper? I use a Silhouette digital paper cutter at home, it’s as quiet as a regular printer so I can have it in my apartment, and my fiancé and I do a lot of crafts with it. I don’t think it could cut anything bigger than heavy cardstock though.

I 3D printed a holder for the Silhouette drag knife to mount to a Shapeoko 2 a while back, let me see if I can find the file for it. It was hard to secure the paper though. With a paper cutting machine, usually the paper is fed through rollers on an adhesive sheet, which keeps it secure while cutting.

Not sure if this fact matters, but the silhouette (and similar, like Cricut) use a passive drag knife, which I’m not sure would work for cutting something like cardboard. I’ve seen a few “actuated” knife solutions that use a stepper motor to rotate the knife parallel to the cutting direction.

I have been considering using a drag knife for vinyl. I understand you can get bits that will fit the router (just don’t have the router rotating) and the blades can be internally spring tensioned for adjustable pressure.
The issue is that being a drag knife, it drags and will be slightly off, particularly where it changes direction. my guess maximum 2-3mm radius on corners.
I saw somewhere guys working on code to compensate. not sure how successful this is.

I understand you can get bits that will fit the router (just don’t have the router rotating) and the blades can be internally spring tensioned for adjustable pressure.

Like knifes that will go directly into the collet?! Do you have a source for that? I’d love to try that out.

BTW @DavidRyan I’m going to move this topic to the #X-Carve room, because right now it seems like more of a hardware question. If anyone can get a drag-knife demo working hardware-wise I’d love to take a crack at getting Easel to work with it. I suspect it wouldn’t be all that different. It’d probably be a bit of a hack though, something like you’d need for using a “Pen” (i.e. set the material depth to 0.0001 or something)

Regarding the software side of things, I think some solutions pull off a drag knife positioning system by ever so slightly moving the knife at the end of a line in order to position it for a change of direction or corner cut. This would make a passive system much more viable.

2nd from bottom, looks quite promising

not sure of diameter

Many forums talk about setting the offset for clean accurate corners, some of these tools are only 0.25mm, so not sure it is much of an issue (less than a credit card thickness)

Regarding the software side of things, I think some solutions pull off a drag knife positioning system by ever so slightly moving the knife at the end of a line in order to position it for a change of direction or corner cut. This would make a passive system much more viable.

Oh I see. I think I’ve seen this setting on my Cameo machine, it is a preference called “Overcut”. From their documentation:

Overcut (found in Preferences) means the blade will do a tiny little extra cut at the beginning of the cuts.

Yep, I think this is what it is referring to. Before making the cut the software lowers the blade to just slightly touch the surface and then makes a tiny swivel move in order to align the blade for the cut to come.

If I were using the term “Overcut” though I would probably be referring to a cut that passes the end point of a line in order to insure that the full line was cut due to the blade being at an angle. Manually this is done all the time when cutting matte board for picture frames to ensure that where two cut lines meet, they cut the material completely with a slight overlap at the corner.

I’ll try and mock up a visual of what I am seeing in my head and post it.

The software that controls my vinyl cutting machine has a specific setting to account for the offset of the cutting blade. I don’t have any of it installed right now, of course, so I can’t tell you what it’s called (and it may just be something simple like “offset”). The blades themselves have a dimension on the packaging that you plug into the software for that offset. I am not a programmer by any means, but it seems like it’d be relatively easy to calculate and account for the actual blade position if that offset is a known value. Or I could be way wrong, and it’d be a coding nightmare.

Here’s a video of a free swiveling DIY Drag Knife and you can see the tiny moves it makes just before cutting each line.

Here is what I was thinking for the mock-up I referred to earlier. this would all be transparent to the user of Easel, if it did end up being an option… 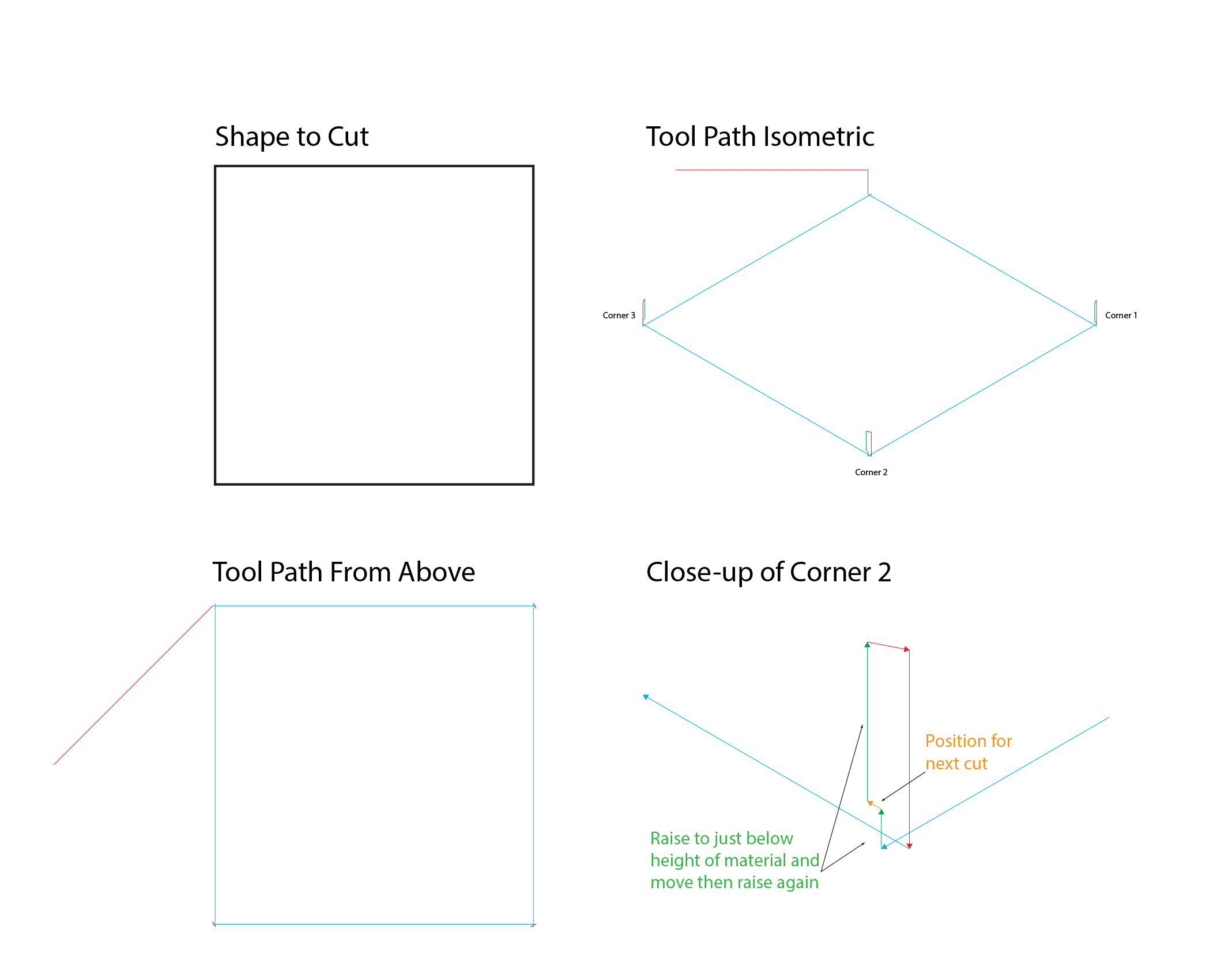 Donektools provides a free tool to add corner swivels to your g-code here. So I’m guessing you could generate your g-code with Easel, input it into the corner swivel spreadsheet and then use something like Universal G-Code Sender to output to your machine.

I’ll probably give this a go once my X-Carve gets in, and I design me own drag knife (something like this).

I like the looks of the DonekTools drag knife, but couldn’t justify buying one just for tinkering with. I also didn’t notice that their spreadsheet for swivel corners was free to download. I’ll definitely be giving it a try when the X-Carve arrives. Thanks!

Ya I like the DonekTools drag knife too, I might end up buying one if I get into this more (that is if my home made version doesn’t hold up). I hope there spreadsheet works well! I’m getting super antsy for my X-Carve!!!

Went out and got some counter sink bits and a combination square today just so I could do something related to it while I wait.

… back on topic, I linked to the same video somewhere else on here and I think I’ll be attempting the same build. After watching DonekTools’ video on how the xls file works, it looks like a similar DIY tool will work fine for tinkering.

I see that VCarve Pro has a gadget for Donek Drag knife. http://donektools.forumotion.com/t3-an-introduction-to-the-vectric-software-drag-knife-gadget

I’m working on a 3D printable attachment to replace the stock spindle and bracket that will let you snap in a slightly reconfigured Deep Cut Blade and Housing from a Cricut CNC paper cutter (You can disassembly it and switch the spring so that it can account for downward movement and create some pressure on the material you’re cutting).

Will post a link when it’s done. Then it’s a question of working out how to drive the bloody thing!

I’m not sure if this is the right place to post this, but I’m starting to design a drag knife attachment for when my X-Carve comes in. I’ve noticed a couple different types of drag knifes and I’m leaning towards a Donek Tools type drag knife.

I’ve seen drag knifes that have their own bearing system and ones that just use the spindle. My question is, would the stock spindle that comes with the X-Carve (300W) have a great deal of resistance to spinning when the power is disconnected from it? Or would it be better to just design a drag knife with it’s own bearing system?