I just wrote up a 6 page procedure, including a data sheet, to go along with a calibration test pattern I’ve been thinking about for a while. It is a comprehensive pattern that will check:

It has circles and squares of various depths that allow the user to see if a measurement is off by a scaled figure (calibration issue) or off by a non-scaled figure (loss of steps). It should also be VERY useful for dialing in the X-Carve so it makes perfect circles of all sizes, from .150" and up. I tried to write it such that the user could record their data and then follow links to forum threads that have already been established to address calibration and lost steps.

I published the procedure and pattern in a new project, https://www.inventables.com/projects/calibration-test-pattern. I’m going to start making notes for version 2.0, so let me know if any of you have any comments or suggestions.

22 Likes
Calibrating your X-Carve
X-Carve Maintenance/Troubleshooting Videos - Add Your Own!
Is anyone actually getting 5 thou accuracy?
Hmmmm it's alive but likes to make the Easel character look like a demented Sponge Bob
Cutting bigger than the design
Calibration done and ok but cuts are wrong
First 3D carve. (How bad is this?)
Got it assembled just in time for Christmas
Carving Too Deep
Y axis problems - solved-
Randy's first carve
LeePrince December 10, 2015, 7:38am #2

Thanks Robert, I cannot wait to get out into the workshop to try this out. I think everything is set up ok but it never hurts to check!

Thanks @RobertA_Rieke , Looks like a good choice of shapes and pockets/outlines.
I’ll make a metric version of it and give it a go.

I am going to be building a 1000mm and rebuilding my 500mm, so I will be sure to try out the procedure on both of them.

i would love to see a calibration section built into easel.
place your ruler on the wasteboard, set the gantry to move 700 mm in each direction (x and y). if you end up at 698.5 enter that number into the box and the machine re-calibrates itself (for the steps) this could also be done for the z axis (just not as big of a step obviously).

Awesome idea! It’s good to have a common project to compare! Snagged and saved for later.

HOW DARE YOU QUESTION THE GREAT AND MIGHTY…Oh look, a mistake.

this could also be done for the z axis

A ruler would be tricky.
I find attaching a dial indicator to the spindle / mount works great for calibrating the Z-axis.
Z Axis Calibration Setup with Video
Yes, I wish Easel had a little calculator built into it.
But for now, paper, pen, calculator, and some good old math will have to do.

yeah, i know how it is done, i was just making a suggestion. i supposed you don’t really need to calibrate too often so adding it to easel might not be worth it.

I found that the speeds and feeds were way to much for my machine. It lost steps like they weren’t even there and took out a clamp.
So I will have to reduce both and try again.

What spindle do you have, and what bit did you use?

By the way, for those without a 0.5mm ruler and V-bits on hand:

A toothpick in the collets works for getting the worst of the stepper calibration done. The tip is thin enough to give a reasonable indication on a 1mm scale ruler.

You did a great job. I just finished going through the carving and measuring. I would suggested adding columns for average values so it’s easy to have all related measurements in one spot on the matrix. Also, I was never sure what to write for quality because I didn’t quite know what was good or bad. Everything looked pretty good, so I wrote “good”!

Overall, I really like what you put together. Looking over all of the results I have, it seems like I could have done with fewer circles and squares, but it never hurts to have extra measurements.

I used a dial indicator set a measured distance with a 6" mic standard.
Set the x zero, measured the distance and fed the x to 6", adjusted the $100 until it zeroed out time after time. Did the same on Y.
For z I used a 2’ dial and it was bang on over the whole 2".

I am thankful for you posting the how as it went well.

Thanks for the feedback, I’m glad it worked out for you!

I debated whether to add an average column, but I ended up running out of room without going to ridiculously small margins or super-small boxes for data (or multiple sheets). As for the quality, I figure that’s more of a personal definition. It would have been hard to describe multiple levels of finish quality without bringing in a bunch of instruments or tools that not everyone may have.

I probably didn’t need so many circles and squares, but it gave me a chance to add multiple depths for more Z data points. I’ve also noticed that unless my machine is perfectly dialed in, small errors in small circles tend to be a lot more obvious than in larger ones.

I’m always working on the next version in my head, so let me know if you come up with any more comments or suggestions!

Great idea, and well done! Do you have a picture of how you set up the dial indicator for X and Y? 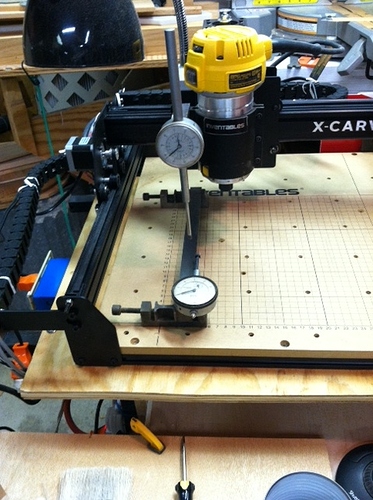 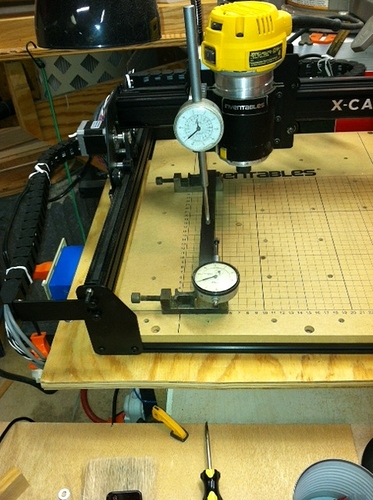 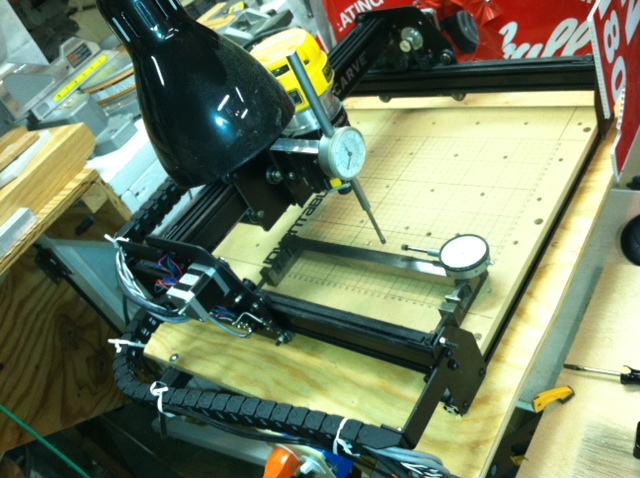