"Denali", and questions about the time involved cutting big stock 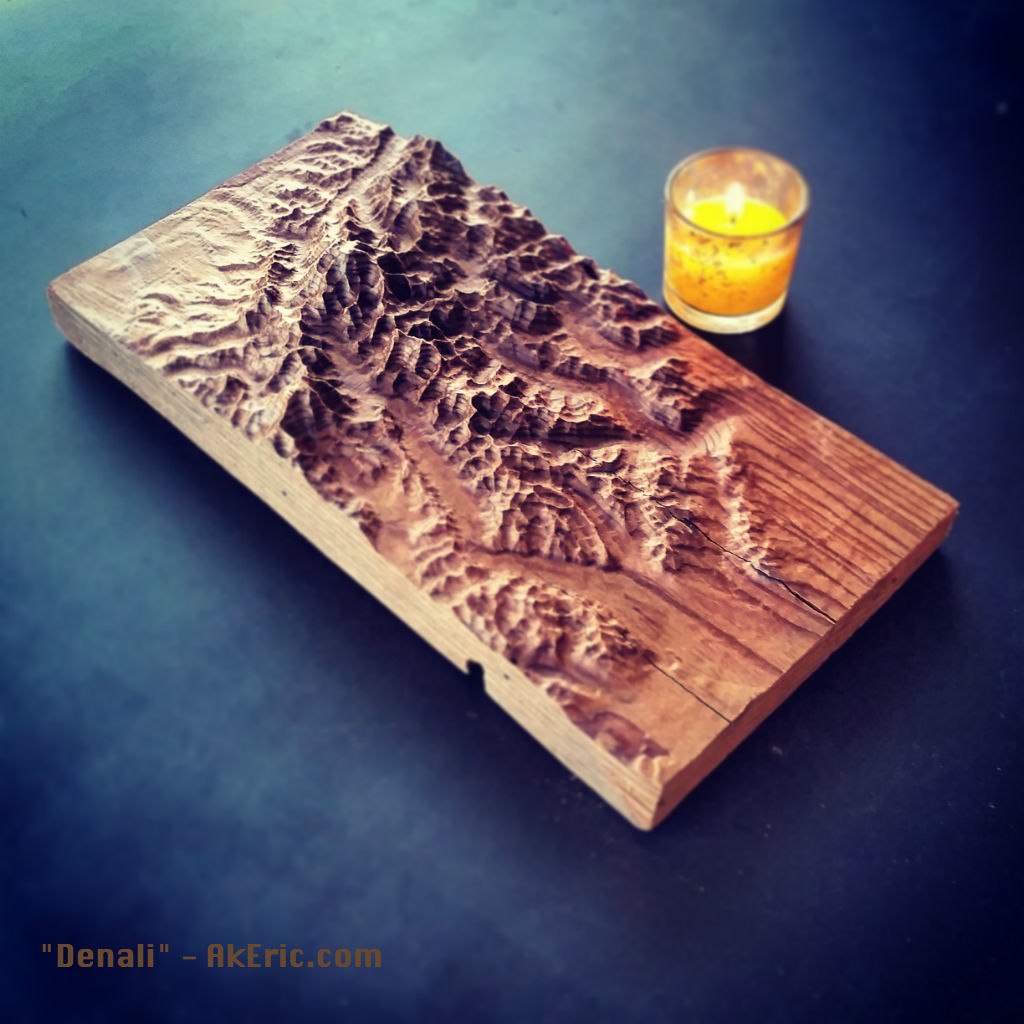 Cut this over the weekend: Captures Denali in the middle of the Alaska range. I’d picked up a reclaimed redwood beam out of a 1800’s structure, the stock here measure 2.5"x6"x12". Used a 1/4" 2-flute upcut ballnose for both the rough and final pass, using MeshCAM & chilipeppr. With a 5% stepover, nearly no sanding was needed. “Natural” stain applied that really makes the red pop.

Here’s my question: This piece is about half a square foot. The rough cut took 1.5 hours, and the final pass 3 hours. This is the biggest “detailed” piece I’ve done, but have much larger stock, upwards of 2.5’x2.5’ I eventually want to cut on. But based on how long this one piece took, the pig chunks would take forever. An unlike my 3d printer, I don’t leave this guy alone while he does his work…

Anyway, I’d like to avoid a 24 hour cut in the future, so any tips on how to speed this stuff up would be appreciated. My only thought right now (other than speeding it up) would be to decrease the stepover to 10% on the final pass, thus halving the time, but giving me a considerable amount of sanding to do.

10 leaves visible ridges, i imagine 15 will be a lot worse.

I’d leave it at 5%, but try to increase speeds.

And maybe do it in parts

thats pretty sweet. any chance on a tutorial?

On trick I have tried is a 3 pass operation:

This seems to work well for speed vs quality. Originally I tried to leave just a very thin bit of material with the larger bit, but there were areas the larger bit could not carve. When I got to those areas with the finishing bit at higher speed bad things would happen when the depth of cut suddenly increased.

Thanks for the thoughts everyone:

I'm still pretty new to the whole CNC thing, am a visual learner: Did a series of cuts to show how steopver values effect finish quality using a 1/4" ballnose. Thought others may find this of use as well. http://www.akeric.com/blog/?p=3825 Blog full of a bunch of closeup pics, but here's the overview: [image]


So I think I need to stick with that.

@anon68752607 : I’ve done pieces in the past that were done in parts, my goal here is to try to do ‘one big piece’. Thanks for the idea though. I think I’ll definitely go the ‘increase speed’ route.

@AaronMatthews : I like where you’re headed, what do you use to generate the 3 pass operation? I currently only have access to MeshCAM (I’m on the Mac), and it only supports rough\final.

@RobertGoodwin : The whole process is actually super easy: Go to http://jthatch.com/Terrain2STL/ : Download the map you’re after. Load that into your cam (I use MeshCAM) to generate the toolpath, aaaand, cut. I can dive deeper into the specifics of any of that, just let me know.

awesome, thanks. i havent used mesh cam before. only fusion 360 and easel

I’ve found that cam software on the mac is limited, and even more so when trying to cut actual polygonal mesh data (stl\obj files) that I’m used to working with. Luckily meshcam will do this, and is on the mac. It does look\feel ‘old’ compared to more recent software, but it does work as advertised

what do you use to generate the 3 pass operation?

I have VCarve.
On 3D operations it has a Roughing path and Finishing path.
The Roughing path observes the depth of cut info for the bit and has a “work allowance” which it the remaining material left behind for the finish pass.
The Finishing Pass ignores the depth of cut setting (it assumes all material has been removed already)
So I set up a normal rough cut with the larger bit
For the rough cut with the finishing bit I used a modified bit with a (false) depth of cut limit greater than the object. So it does not recut empty air.
The finish cut I setup as normal with the normal finishing bit.

@AaronMatthews : Thanks for the info, giving me some ideas (well, ideas that will just take longer to cut

I was going to pick up VCarve, but they don’t have it for the mac :S

@AK_Eric I too am a Mac tragic, but ended up buying a really cheap PC laptop just to run V Carve pro. I understand it’ll also run happily on a Mac if you boot up into Windows.

Hi! Love the map! I’ve been making 3D maps for a few months now (https://www.etsy.com/shop/TinyMtn), and I follow your procedure pretty closely, though I’m on Linux and also don’t have access to lots of tools. I do a rough pass computed with kiri:moto (https://grid.space/kiri/) with a 1/4" 2-flute straight bit. Then straight to the finishing pass, though I use a much finer diameter: 1/32" ball-nose V-shaped bits. My stepover is 0.008", and I found that 0.0125 and 0.01" all leave subtle ridges. So my latest large piece, with a 9"x9" build area, took 7 hours for the finishing pass (pic). Like you, I’d be happy to know how to do this faster, though my z-travel speed might be a limiting factor. 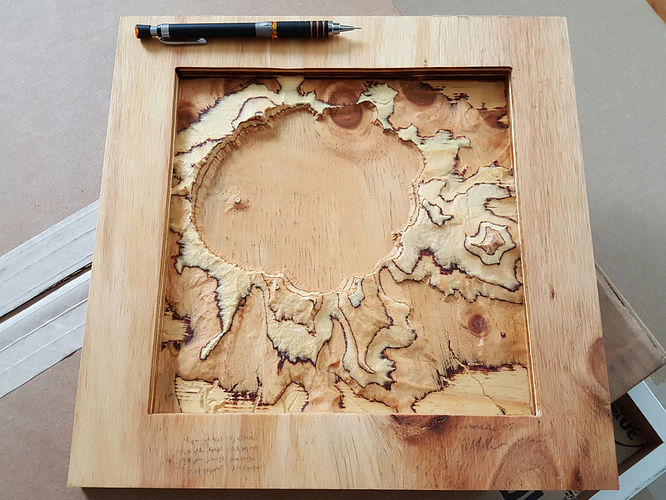 It’s not the cheapest plywood—it’s one step below the nice Baltic birch stuff (~9 layers vs. ~13 layers in a 3/4" sheet). The dark interlayer adds the appearance of “topographic map” to the piece. The slow feed rate for the finishing passes and small stepover mean that I don’t have to sand. But I do have to wait.

@MarkStock
Hrm… I replied to this, but it got bounced for some reason. Here we go again:

Yah, I find them really satisfying too. I’d not seen Kiri:Moto before, but I’ll check it out as an alternate to MeshCAM.
I’d like to switch to a 1/8" bit for the finish, but I’m terrifed of the times it’ll take to do it

What do you use to send the gcode to themachine? I’ve been using chilipeppr, but it’s been ‘pausing’ on me during the finish pass (I can unpause it), and I’m told maybe because I’m using an old laptop :S

Hi! Love the map! I’ve been making 3D maps for a few months now (https://www.etsy.com/shop/TinyMtn), and I follow your procedure pretty closely, though I’m on Linux and also don’t have access to lots of tools. I do a rough pass computed with kiri:moto (https://grid.space/kiri/) with a 1/4" 2-flute straight bit. Then straight to the finishing pass, though I use a much finer diameter: 1/32" ball-nose V-shaped bits. My stepover is 0.008", and I found that 0.0125 and 0.01" all leave subtle ridges. So my latest large piece, with a 9"x9" build area, took 7 hours for the finishing pass (pic). Like you, I’d be happy to know how to do this faster, though my z-travel speed might be a limiting factor.

Well, I can’t do MeshCAM, so I’ve had to find alternatives. Kiri:moto is pretty reliable, but isn’t perfect. I use it for the rough passes, and dmap2gcode for the finishing pass. I use UGS to send the gcode, and as long as I run it with enough memory, it never balks on big gcode files. My command is “java -jar -Xmx256m UniversalGcodeSender.jar”.

I think that you’ll find that you can re-use the stepover (in inches, not percent) for smaller bits, so you shouldn’t lose time—you’ll just get more detail. I’m excited to try my new 1/64" ball nose V-shaped bit on small (<3") mountain miniatures.

Nice maps Eric. I have been experimenting with similar 3D maps.

FYI. I run Vcarve Pro on my MacBook Pro. I installed Windows 10 on a virtual machine using VirtualBox. VirtualBox is open source and free from Oracle. It works great.

Thanks for the info: I don’t want to invest any more into this old Mac, I really just need to invest in a new PC and move back to my happy place

Did another Denali cut for a commission: This time on the finish pass I swapped to a 1/8" ballnose (previous cut I just left the 1/4" ballnose in). Probably hard to tell from the pic, but I was able to pull out even more mountain detail. Pretty happy with this one.
Only downside was that using Chilipeppr, it started to choke on the 4.8meg file. It would cut for 8 seconds, then pause for 4, etc, repeat… making it take waaay longer than it should (3.5 hour finish pass). Talking on the GoogleGroup, I guess this is a known problem, and the SPJS grbl code needs a port from tinyG. Next time I’m going to give UGS a shot… 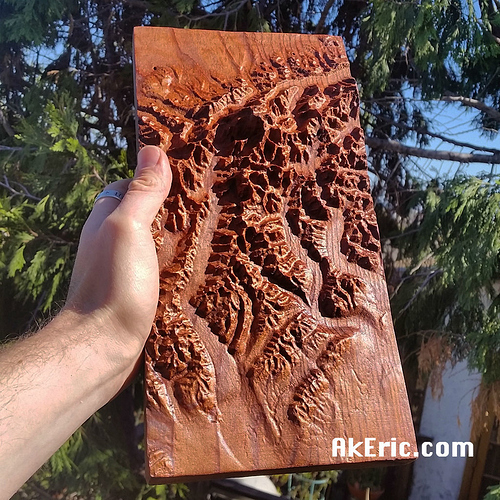 Thanks for the info @PhilJohnson : I’m relatively all new to this (since last Dec?), and chose Chilipeppr as my sender at the beginning of my walk down this path… but am starting to find its limitations. The Denali piece is 6x12" with a cut depth of around 1.5": I have redwood stock sitting around that 's 2’x4’x2", and want to do some topo maps on it, but unfortunately there’s no way I could do this in Chilipeppr at that size, based on how it’s behaving: Good to hear UGS can probably do it.