Design for a new 1000mm baseboard

Hi everyone! I am about to start on a big project and realised that this would be a good time to re-do my baseboard.

I have re-flattened my original MDF one a few times on the x-carve but as the working area got lower I ended up with raised sides. So I had to hand-plane them down so that large stock could sit flat on the working area.

Thinking about a new design I wanted to have something that I could cut on the x-carve, so it’s made up from four smaller pieces. I also want to pre-lower the sides so the working area is higher and can be levelled by the x-carve without any issues.

I also want to make it out of plywood instead of the original MDF. One thing the x-carve has taught me is that MDF is just not a good structural material. It has very little strength.

So far I’ve designed the four pieces in Fusion 360 and wanted to show you all where I am at.

The next step will be to start working on some work-holding methods that are a little more accurate than the clamps I have been using so far.

The image shows solid wood because I can’t find a good way to render plywood in Fusion 360. 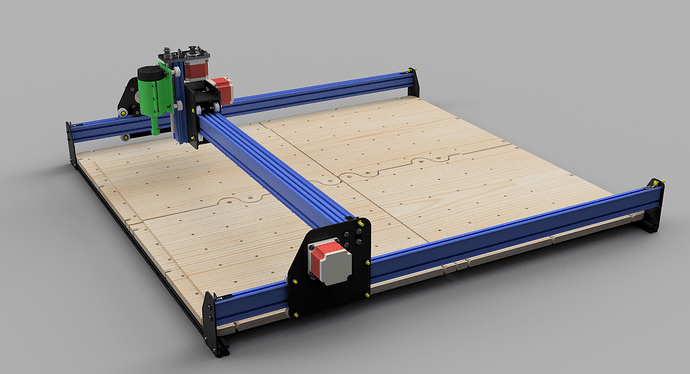 Here is an image of the baseboard pieces by itself.

I’ll be watching to see how you progress.

Bamboo would be nice

Phil, I don’t think I’ll need to support the seams a lot more. They are going to be bolted to the middle beam, that should be enough for my needs. I suppose I’ll find out soon enough!

I’m not sure what you mean by ‘plywood will not plan nice’,

Robert, work holding is a very important part of woodworking and machining. It plays a crucial step in complex operations that require the work to be moved or rotated.

I’ve seen tongue and groove bamboo flooring. I don’t know if it would work or not. Maybe two layers?

One of requirements I have is to make sure that it’s easy to maintain parallelism between one side of my stock and the y axis.

To do that I have to ensure that the baseboards are parallel to the y axis and then provide a way to transfer that parallelism to the stock.

When setting up the baseboard I will use two of these to make sure that each of the leftmost baseboard sections are parallel to the y axis. With the baseboard more or less in place but a little loose I will push them towards the left, so the little protrusion at the bottom of the brackets will bump up against the right hand side of the baseboard slot. When in position I’ll tighten the screws.

The brackets are not permanent! they are only there for setting up. The theory is that I’ll then have a slot on the baseboard that is perfectly parallel to the y axis.

The little bit of the bracket that fits into the baseboard slots is 4mm wide. Which is also the distance between baseboard segments.

If I cut out four of these brackets I’ll be able to accurately position all the baseboard segments. I hope …

It all seems a bit fiddly so far. I’m going to continue down this design road a bit more and see if things still make sense when I do some work on the stock holding brackets.

Run with it. Sometimes there is plenty of fun and discovery to be had just designing and modeling. I have made thousands of 3d models just because.

I believe they meant that plywood would not “plane” well.

@JDM, will do! I think that becoming familiar with a tool like F360 is a great skill to have. Important for someone who wants to make furniture or devices in the modern world. Regardless of how they are going to be manufactured.

@AngusMcleod, I think that by the time I finish with them they won’t be able to be symmetrical! but if there is a chance I will try. I’m fairly sure though, that one of the boards will have a big-ol hole in the middle of it for holding drawer sides at a right angle to make dovetails, box joints or just dowel holes.

@RyanRoberts maybe … but the x-carve is going to cut them!

I did some work on the ‘parallel’ clamps today. 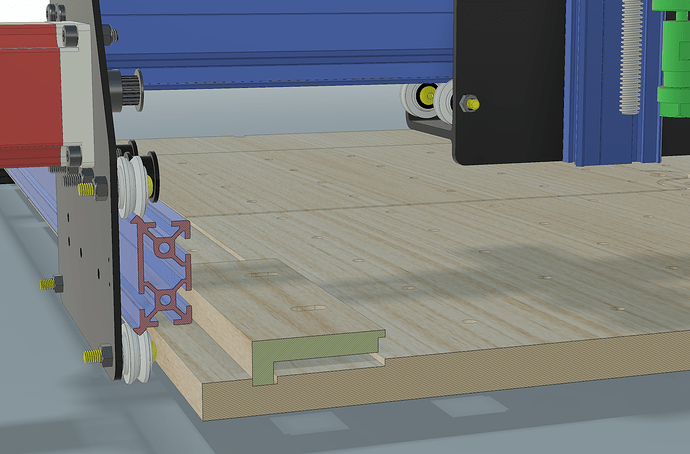 The stock fits in under the little lip all the way on the right of the clamp. The lip is very flat so the tool can get very close to the edge of the work piece.

The lip is flat and narrow so it won’t be very strong. I’m hoping that by making the clamps long the pressure will be distributed along the length of the lip and so make up for any weakness.

Two of these clamps on the left of the machine should be able to hold long work pieces down securely and parallel to the y axis. A couple of similar clamps on the right should do the same for the other side.

Today I designed the other side of the parallel clamp system. It’s two screw holes wide and able to slide along the holes to get to the workpiece.

I also spent way too long trying to work out a way to mount drawer sides vertically to cut dovetail joints but I decided to give up on that effort. I couldn’t come up with anything that I liked.

You can see the remains of that effort in the image below. 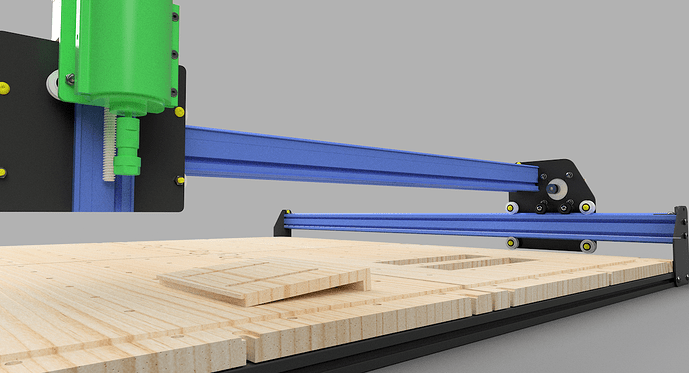 The ones on the left move along the edge, the ones on the right have more options to account for different stock sizes. Here is an image that makes it clearer. Looking back on it now it really looks like I picked yesterday’s image to be confusing!

Of course, I’ll have a few of each so I can put stock anywhere, it’s only when I need precise placement that I’ll use the edge clamps.

Darnit, I was hoping to have some real world pictures to show you all today but as I was calibrating the machine the x axis belt broke!

It will take a few days to get more belting.

Urgh! I started cutting the first section today but screwed up and didn’t make sure that the Y axis was perpendicular to the X before cutting.

I ruined it! AND now I don’t have enough plywood to do all four sections. Dammit!

Here is a photo anyway. 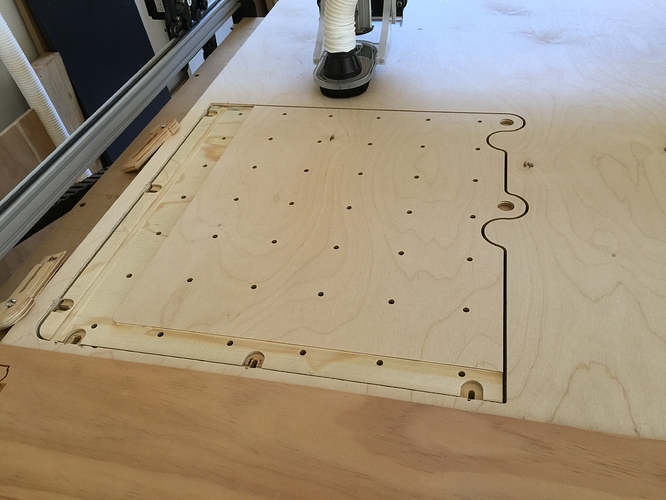 Got some more of it done today.

Still don’t have enough ply for the rear-right quarter but here’s the rest:

Mounting the first board parallel to the y axis:

Second board parallel to y axis at the right spacing.

Third board with spacing: 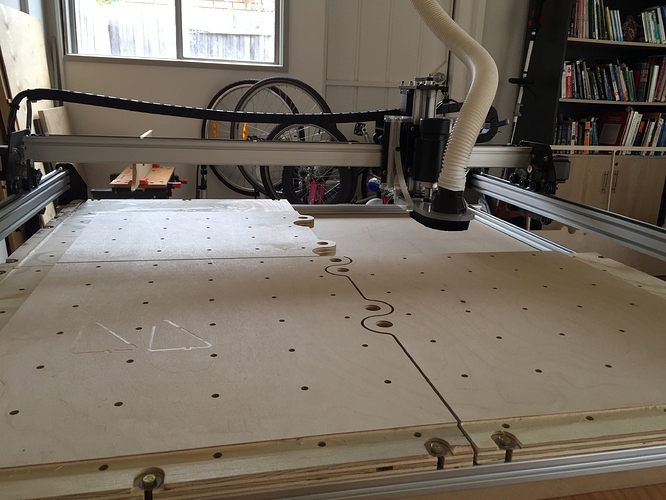 Cutting out the first long clamp: 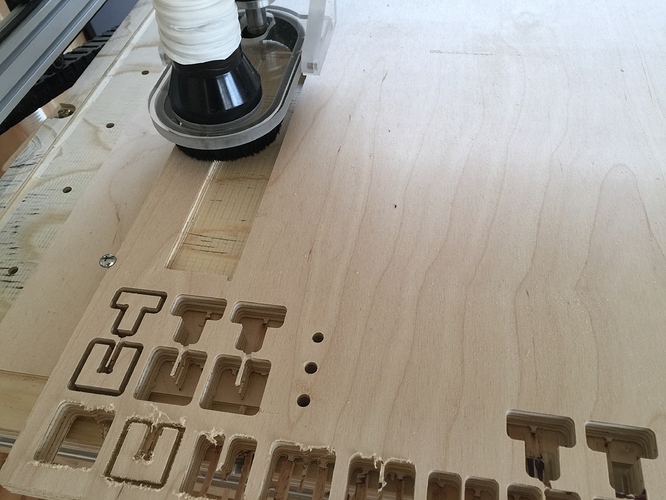 Ply piece held down with long clamp, parallel to the y axis. 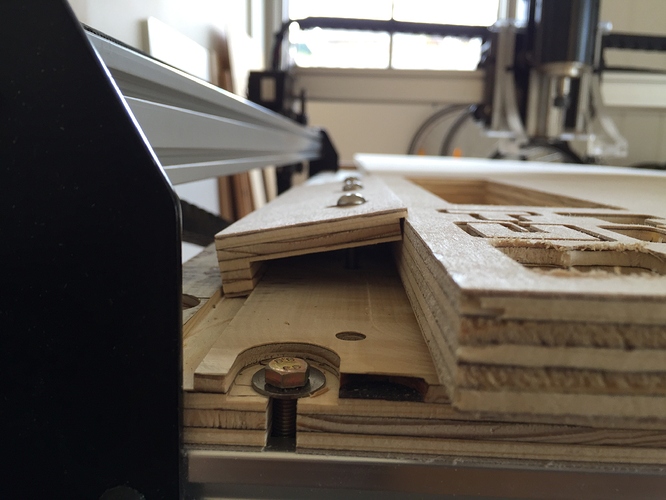 Note how with these low profile clamps, as long as the chuck has just a little bit of clearance from the work I don’t have to worry about it hitting a clamp.

So it occurred to me that using this thing is not really like woodworking.

I have this design for a part you see, it’s a big part and I don’t have a big enough piece of material to make it.

I DID have it, but then I made a mistake in with the first quarter of the board so I had to do that one again, now I don’t have enough material for the last quarter. So I have to get more.

Unless, I just go into Fusion 360 and just split the one part into two smaller parts!

So that’s what I did.

It’s easy to forget we can do these things with CNC technology. So I finished the baseboard today: 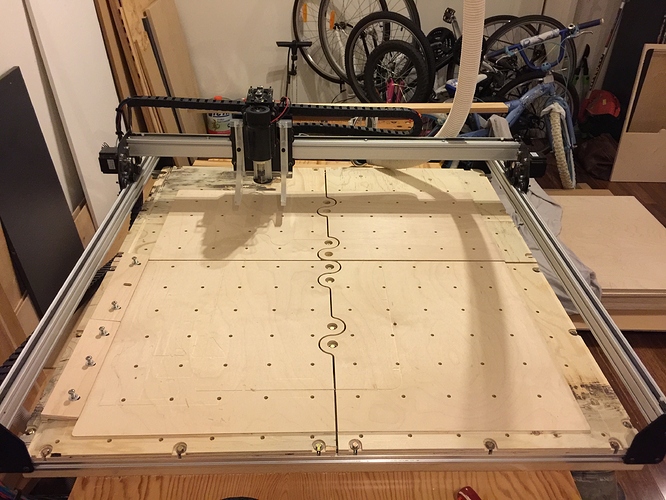 I think I will be leaving the two clamps on the left in place permanently, they are super convenient.

In this one you can see the longer clamp on the background. I will need to cut a couple more, maybe of different lengths tho avoid that horror at the front of the machine. 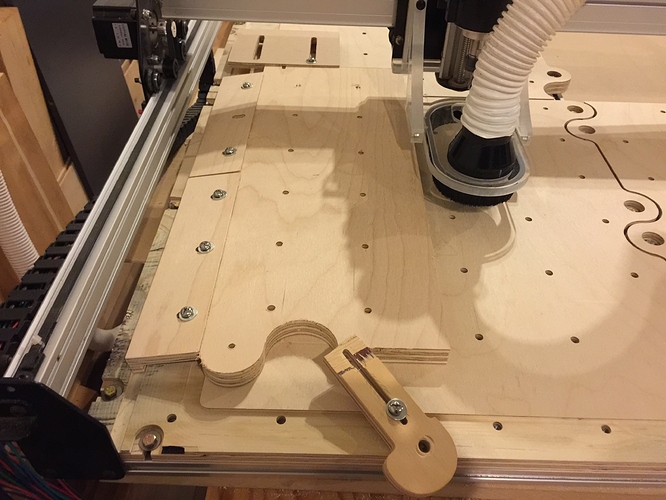 When I first cut the two-hole clamp I didn’t set the z down far enough so the holes weren’t cut the whole way through. I mounted it on the machine, up against the left to ensure it’s parallel to Y, then I went into fusion and set up a cut to only cut out the holes. I set the zero point in the Fusion 360 operation to be one of the high corners in the clamp and then set the zero on the X-carve to be the same point.

I re-run the operation to cut the holes the whole way through. 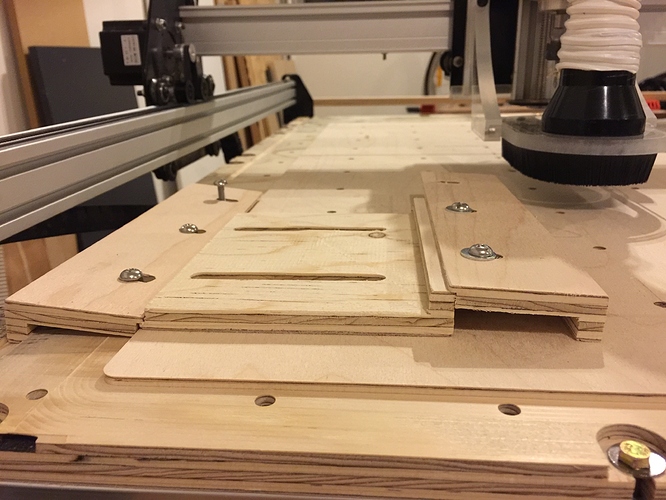 That’s the end of this project for now! I think it will make it easier to cut larger parts for furniture.

Thanks all for following along, I hope it’s been useful to you!