Instruction showing 1/4" from the bottom. This time collet lock button is invisible. I shaved yellow part of router not to touch plate, if it is too much down, this time touching delrin nut screws. I think best place to insert is until lock button clears the mouth. Like I was telling on hangout, check to see if router staying straight. Seems kind of heavy, sagging nose down a little. I had to insert shim between extrusion unit and holding bar by loosing two screw down below.

How bad is the sagging? I’m about to install mine today due to my default spindle died over the weekend and mine has been down ever since. My mount arrived today.

I’m not done wiring mine, but with the 611 in the mount I don’t see any deflection/twist along the 500mm length.

hmm ok mine is the 1000mm so this should be interesting… now just have to figure out a dust shoe for it that i can load up into easel to deflect the air out to the sides.

I can say you can fold regular letter type paper 4 times and insert between extrusion and carriage rail to straight up.

I’m new to the CNC world. However, I did just ordered the x-carve 1000mm fully loaded with the 300V spindle. Why is the DeWalt 611 better? Seems like some people are having trouble adapting it so it will be able to work properly? Thanks

Good aluminum cutting bit starts from $80, and if someone interested carving/drilling aluminum, must pay the difference.

They don’t have to cost $80 @AlanDavis

NYC CNC on youtube uses these bits and has great things to say about them.

@JeneJohnson
The DWP611 has more power, a built in speed control and built in work lights.
As compared to the Bosh Colt and the Dewalt DWE6000

Anyone using the DWP611 router in the new mount yet? I am just getting ready to install mine, but how are people mounting theirs so that the router’s collet lock is usable, but also not rubbing the case of the router on the X-carve itself. Was hoping someone who already found the optimal method would post a pic or two.

Mine arrived today and I’m wondering the same thing. Also mine seems very tight, to the point where i am having to force the router into the sleeve and its still not really going in and this is without even putting in the 3 screws to clamp it down… Need some advice…

Just and idea, but…

Before sliding it into the sleeve, can you pry it open just a hair with a wedge or wood or something that won’t mar the finish? If it looks close, but is still just a little tight to fit, then a slight pry might just do the trick.

Precision milled or extruded parts sometimes have problems fitting together due to heat/cold expand/contract issues.

The spindle mount isn’t really optimal for the DWP611, but I sanded the router case to give it proper clearance for the top of the Z axis. I also modified the spindle mount itself to give me access to the collect lock. I didn’t want to mount my router 1/2 to 3/4 inches lower to have access to the collect lock because then I loose that space on my Z axis, so I used a Dremal cut off wheel, Dremal sanding wheel and some of my wife’s black nail polish and fixed the issue. 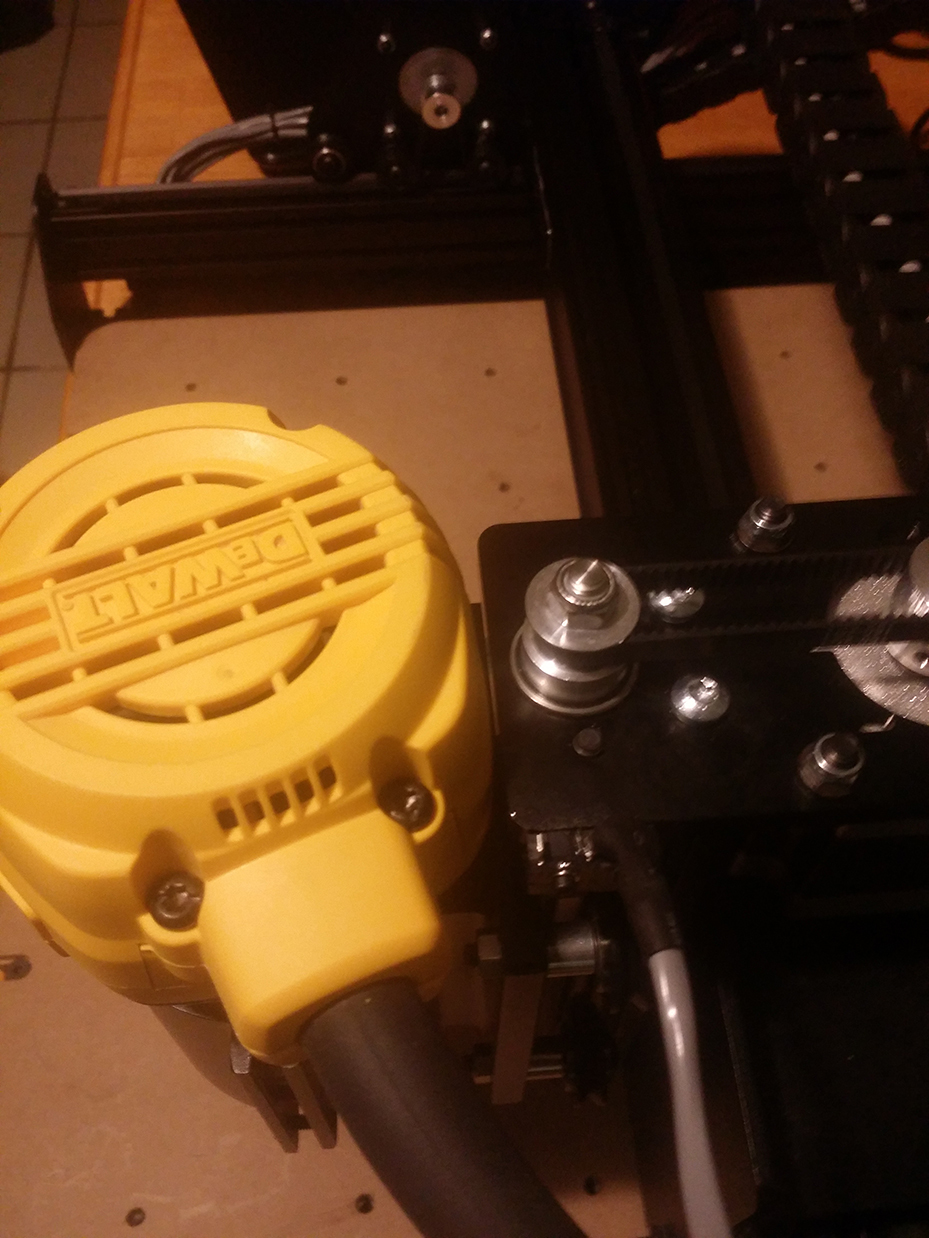 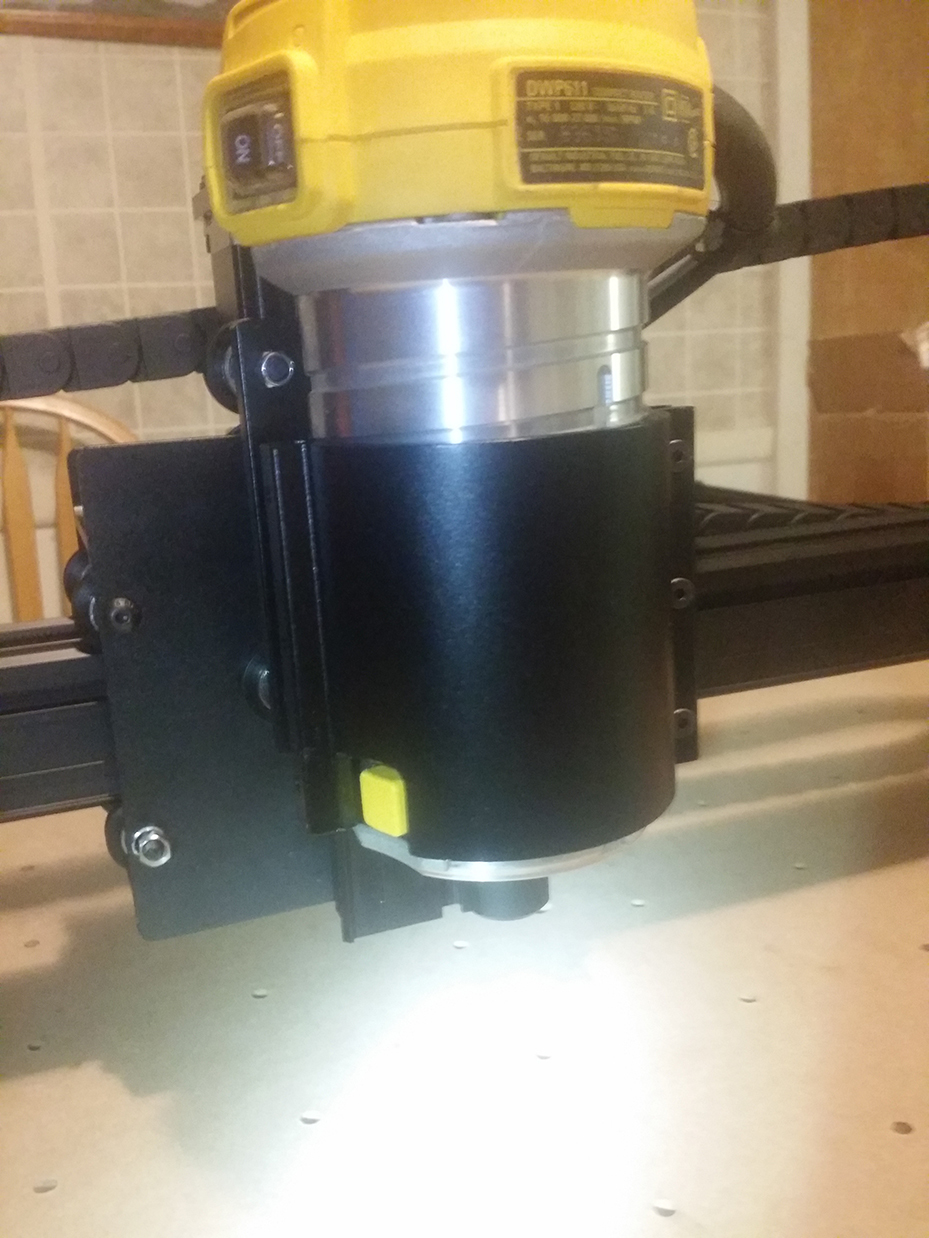 Very nice I may have to do the same .

How is everyone handling the AC power cable for the DW611? If you cut the AC plug off, will it fit in the drag chain?

Tip: The power cord is rubberized and can only be pushed through so far before encountering resistance. Instead, I ran a bit of higher gauge plastic coated wire through the drag chain, butted the wires end to end with duct tape. I pushed it through. As it came out, my son gently pulled it as I was pushing it through. 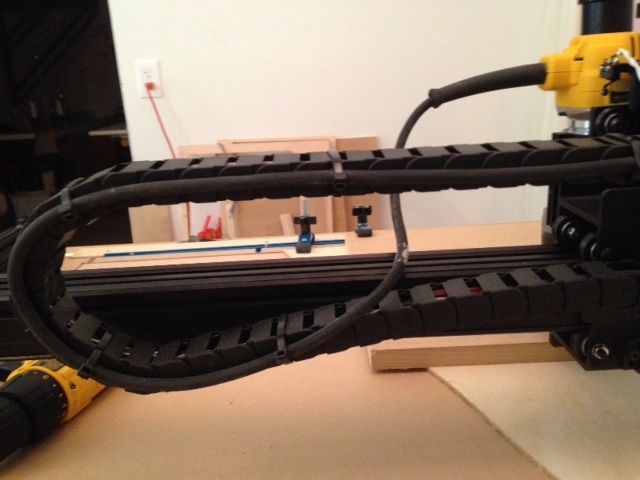 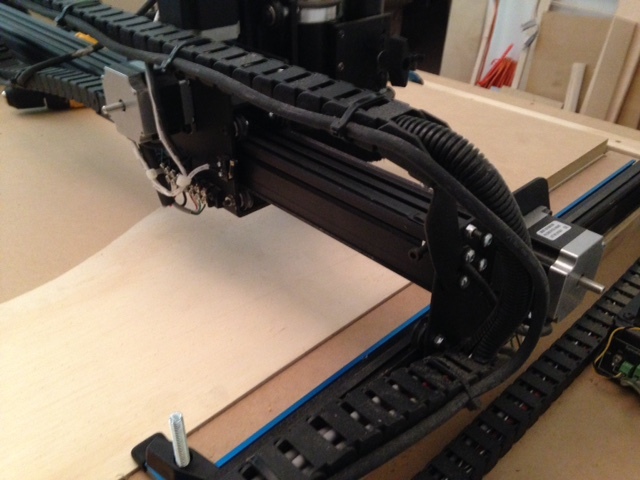 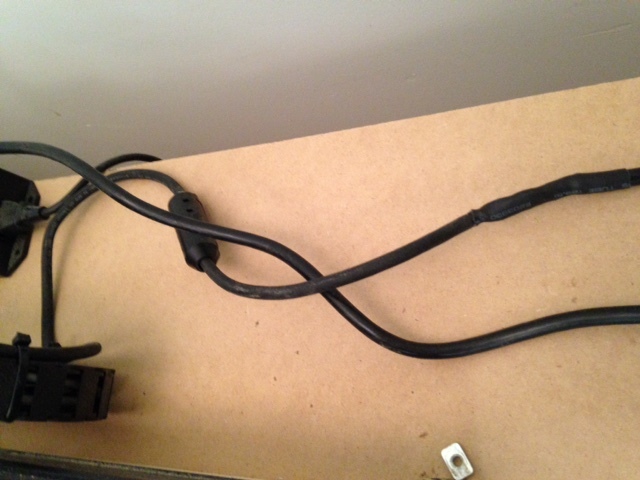 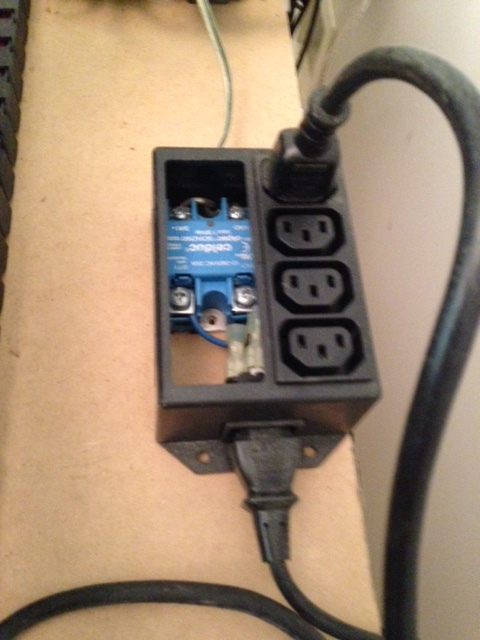 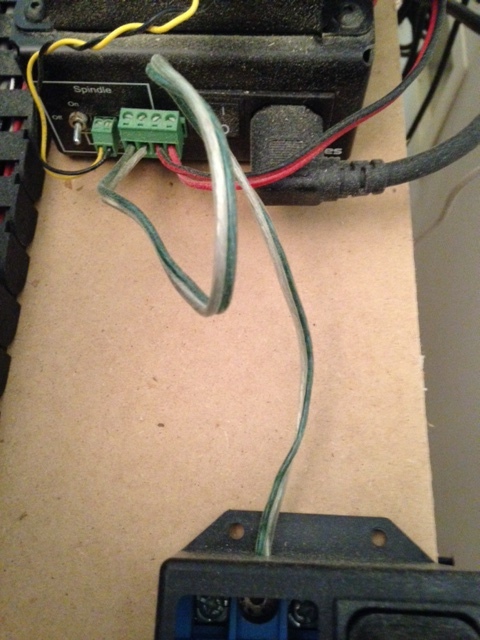 I was going to do the same, but since I had room in the drag chain, I figured “Why not” 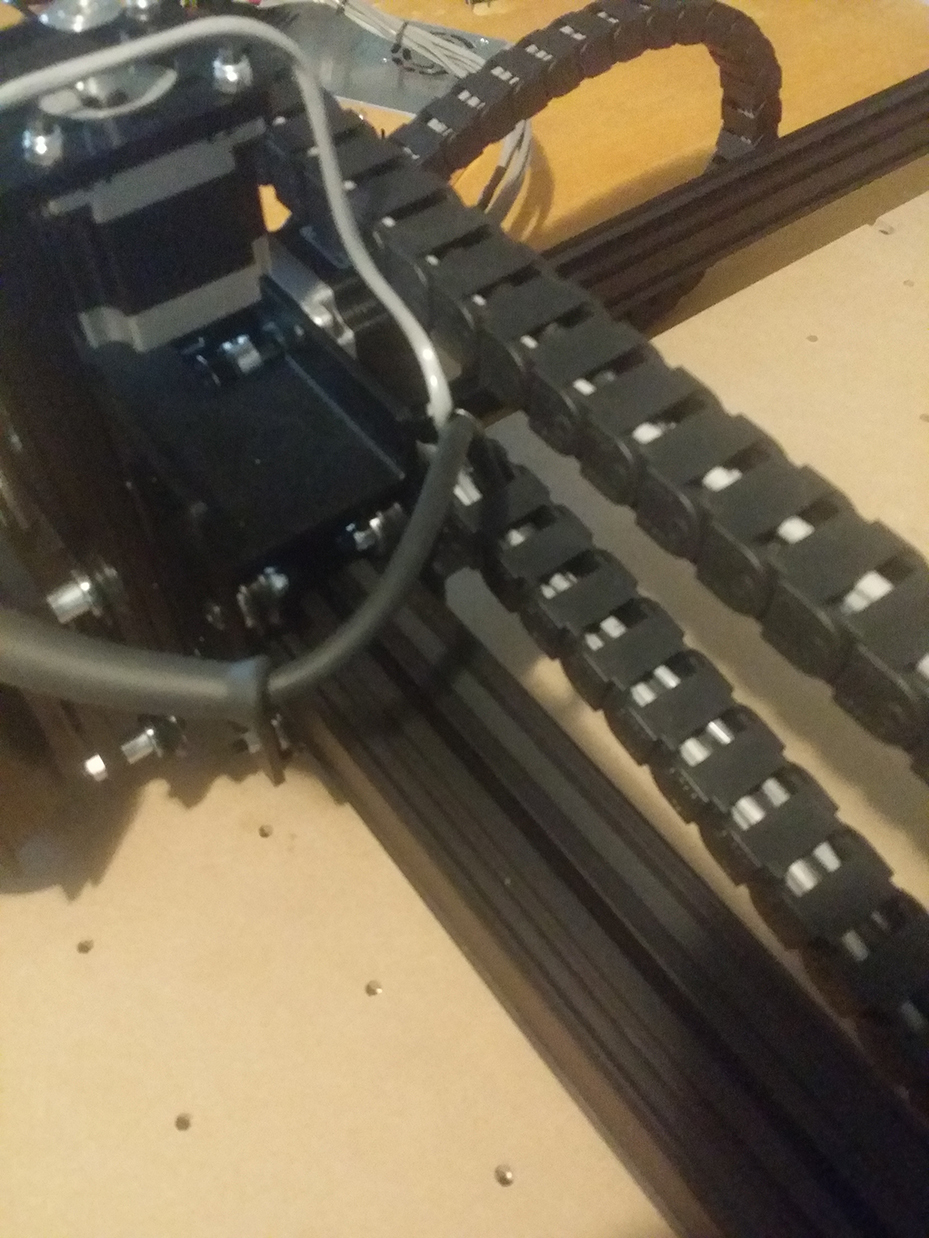 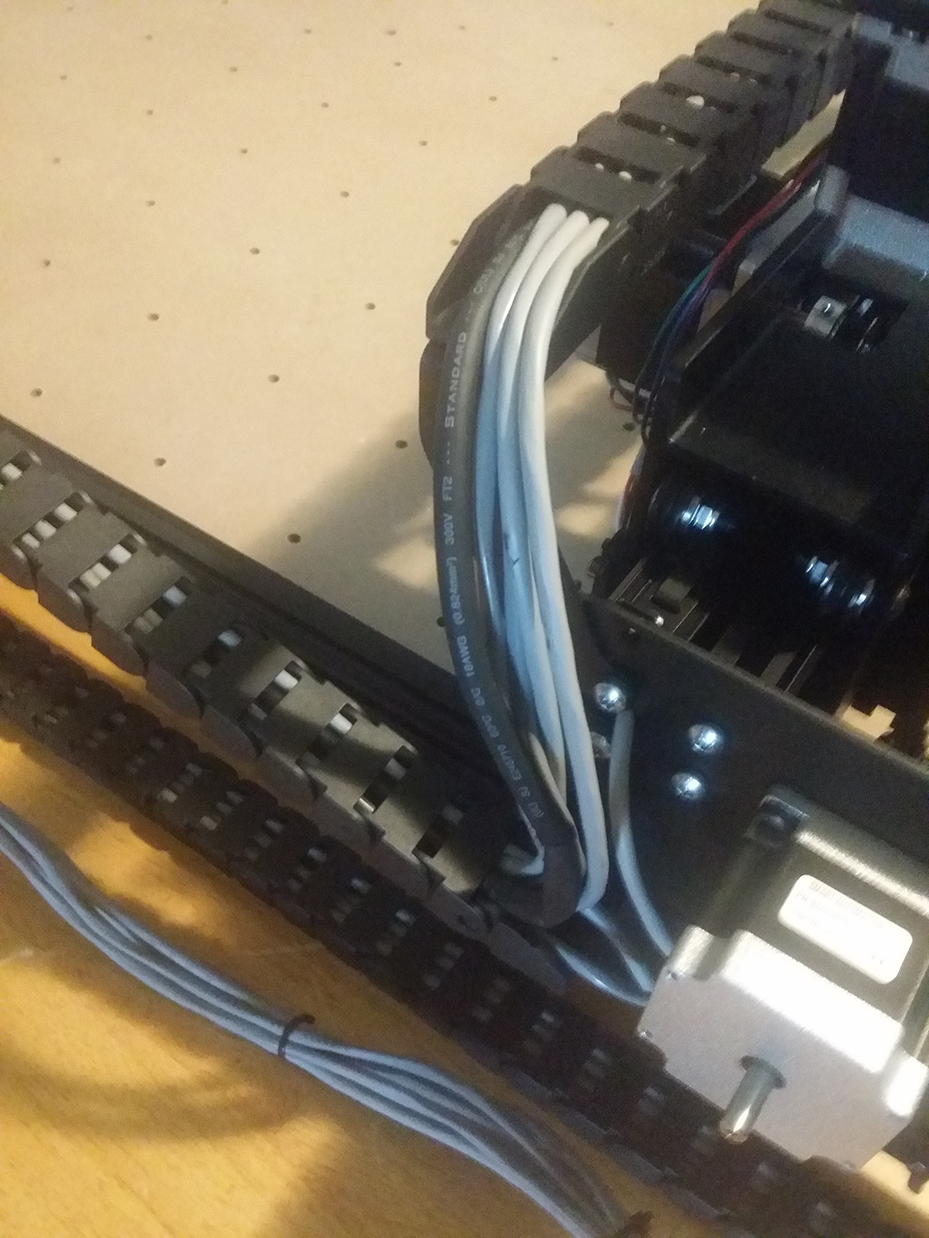 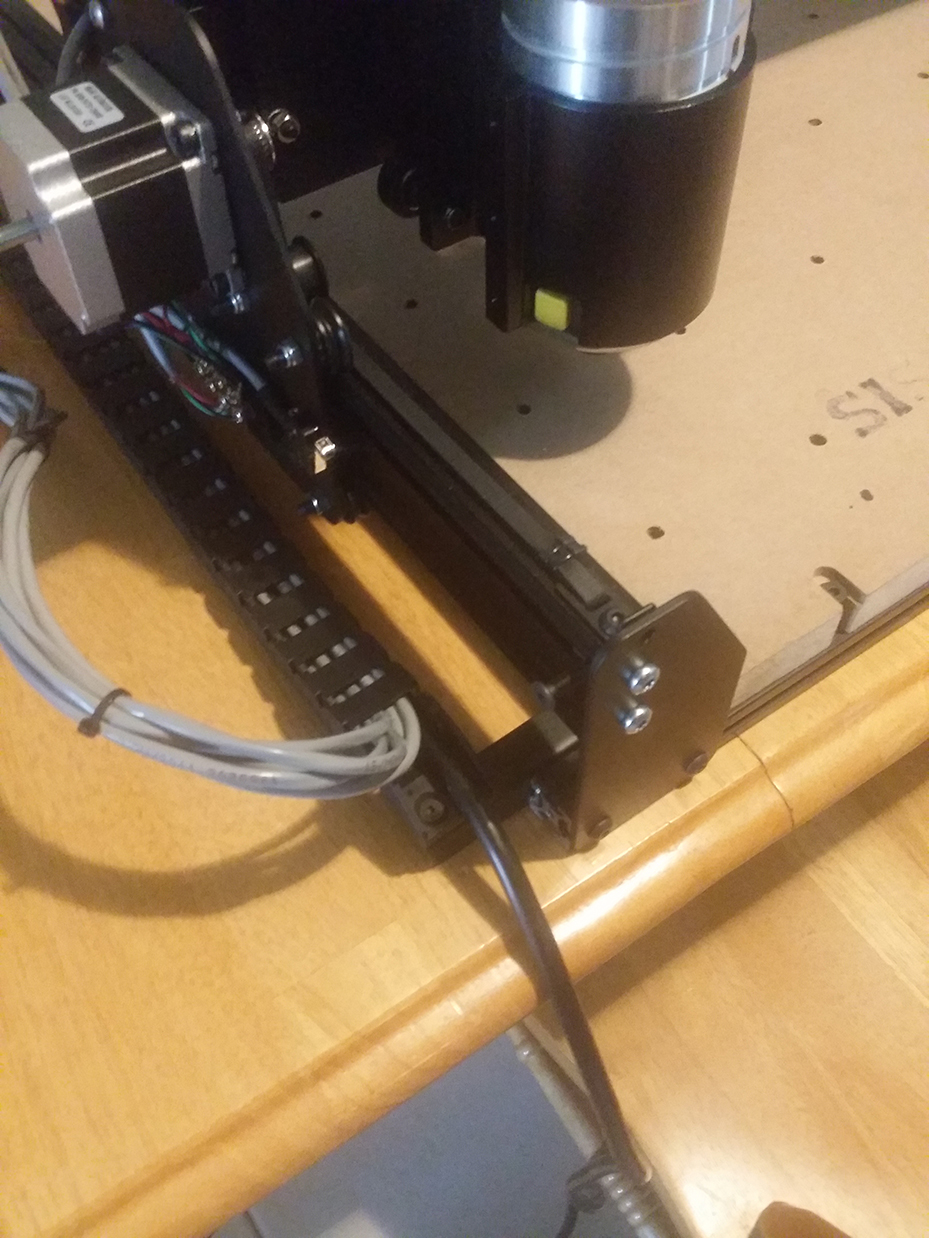 Perfect, Looks like I rushed it a little. I will put inside first chance.
(Look at the Table, Dewalt mouth push button housing. Men, you’re good.)

I like the relay idea. I’ll have to order one.