I was out in NYC and got the chance to hang out with @jimmydiresta which was pretty cool. I gave the cab driver the address but when I got there all I found was this. I looked in the Pizza place next door and then whipped out my phone to call Jimmy and I saw him walking down the street. 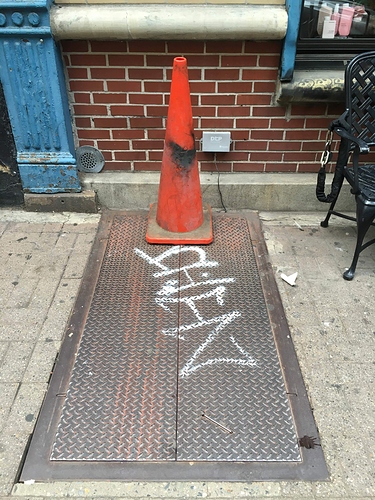 He has the magic key and just like the Legend of Zelda bam the door opens and we entered the labyrinth. It was the coolest entrance to a shop I’ve ever walked through. We have a hidden bookshelf at Inventables but this was way cooler. 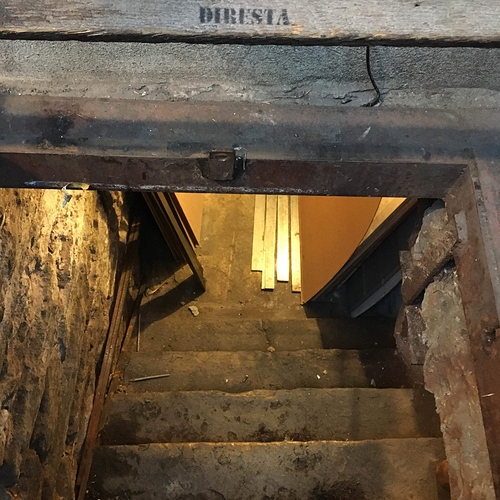 When you get down there you see a couple different rooms as the shop runs the length of the building. This is the main area where he’s got his table saw and bandsaw. 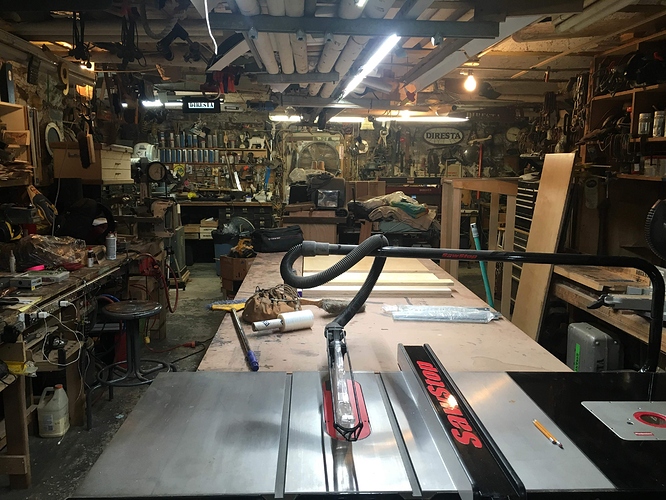 In the room closer to the hatch he’s got his X-Carve set up. He had the original 300W DC spindle. Over the weekend I upgraded him to the Dewalt 611 and an X-Controller. We don’t have any X-Controllers in stock so I took the one off my machine at home. I mean after all he’s Jimmy DiResta. 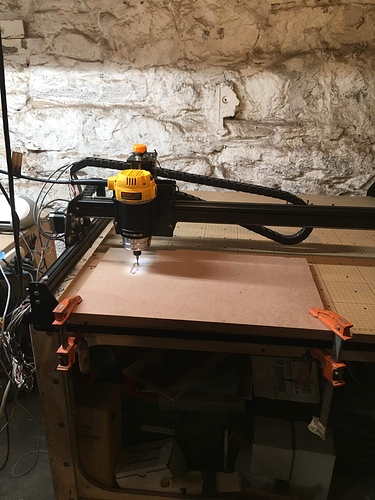 Once I got it all working we had a few hours to mess around with it. I learned a lot from his approach. He started with a quick win and then built upon it a few times. It was pretty cool to see him in action because when you watch some of the videos it’s mind boggling how he does this stuff. As he approached a new tool he didn’t try and build a complex project he first just engraved his logo. Seems simple enough but during that process we learned that the A in DIRESTA had an area that the 1/8" bit was too thick for so we learned a little about bit size. We also worked on the formula for setting feed rate since Inventables hasn’t tested all the feed rates for the Dewalt 611 like we have for Carvey. We looked up the chip load for the bit he had and MDF. FR=RPM x Flutes x chip load. The Dewalt doesn’t have RPM listed on it the dial says 1-6 so you need to look up the RPM on the Dewalt website it’s 16,000 to 27,000. These were little details that are manageable when you’re engraving a logo where the risk of messing up is low. We chose the low end of the scale to make it easy setting #1=16,000 and the chip load ranged from .003" - .005" so we started with 16000 x 1 x .003 = 48. It carved the logo pretty slow but it worked.

Once that was done I showed him the inlay app. We took his logo and to save time lined it up with the one we had just engraved. That was a learning opportunity too because we got to use the position tool in the floating shape menu. We lined up the inlay pocket with the engraving we did and put the profile right below it.

I showed him the new simulate feature and the carve time was like 2 hours because we were only going 48IPM and the MDF was 3/4" thick. We didn’t have that kind of time so he said we’ll cut it on the bandsaw. I thought he didn’t understand depth because I was thinking he meant we would cut out the profile on the bandsaw and I kept saying it’s the depth that is gonna take forever. And he kept saying we’ll cut it on the bandsaw but he meant sideways. After he said it twice I just shut up because he’s Jimmy DiResta so I figure let the man drive the train maybe I’ll learn something. We cut the time down to about 30 minutes by only going 1/8" deep on the inlay pocket and 1/4" on the profile of the letters. Then he blows my mind. He cuts the letters out on the bandsaw. Watch this video. I had an edited one but I wanted everyone to see the raw footage to see there is no camera trickery.

Then we went back upstairs and got Pizza at the joint next door to the shop. 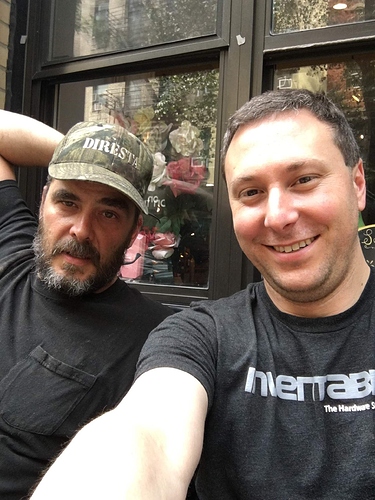 When I was leaving I half jokingly half seriously said something like "Jimmy do you think you could make a stool that was made all from a single piece? He sketched a few things and then BAM the next day he sent me a link to this video. He also published the files so everyone else could make one too. 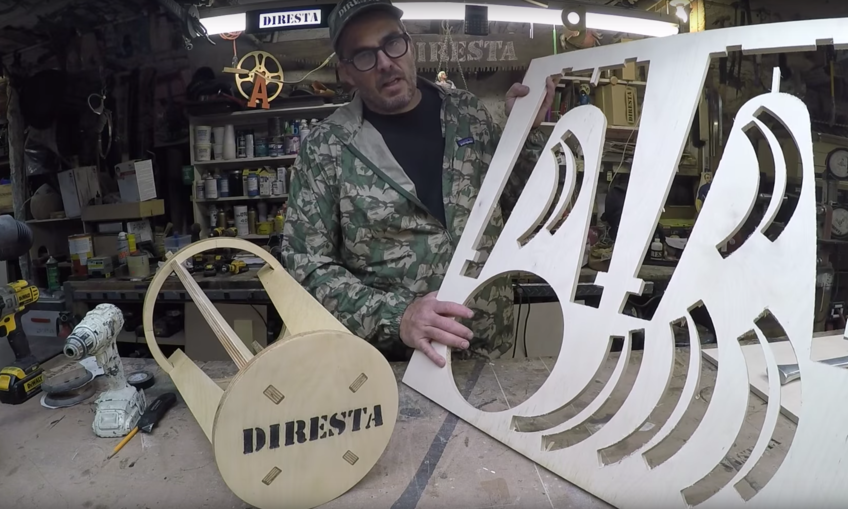 Then he posted the whole video on Make:

The whole experience was pretty awesome. Jimmy has a great attitude and is super patient and willing to experiment. It was pretty humbling to see one of the most prolific makers in the world start small and build on his successes rather than trying to build a rocket on the first try.

Sistering the stretchers was brilliant! As was the wedges and wood filling the keyholes. Very inspiring. What about a contest for stuff you can make entirely in one 31" square? Hmmm…

Zach, you have no idea how jealous I am. Being able to be in the shop with Jimmy and to teach AND learn at the same time? Priceless…

As for the contest suggestion, if there was a contest and Inventables wants non-Inventables prizes, I’d be willing to throw a Manhattan Wood Project cup/cap combo in as a prize. May be better to make it a contest open to all woodworkers though, CNC or not, and have a special X-Carve category. That way there would be a LOT more awesome entries.

Speaking of contests, there’s a YouTube woodworker wooden game contest with a due date of July 8. I’m using the X-Carve to make a (TOP SECRET) game for my entry, and would love to see more X-Carve entries. https://www.facebook.com/groups/231081277283367/

If anyone hearts and then remakes this stool and posts their remake by July 1st they will get a $100 gift card to Inventables. 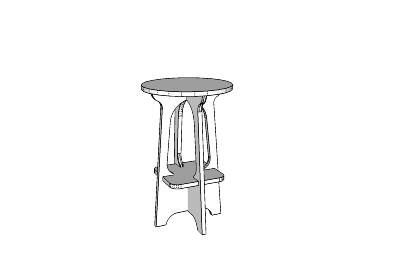 @JosephCompton it’s really up to you. Both approaches qualify as a remake. You can do an exact replica or you can make some modifications to make it your own. You need to post it as a remake project at the bottom of the original project. Screen shot below of where to add it on the project page. 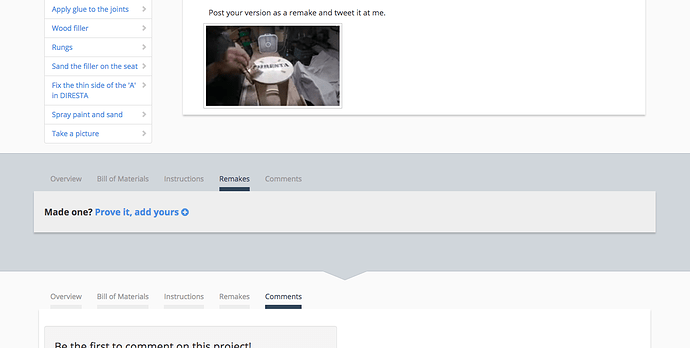 @MidnightMaker that would be a cool version.

Right on, thanks Zack.

I would like to do something with solid wood: maple or walnut or maybe a mix–we’ll see what I time for.

I think my daughter might need a stool, going to have to get to work!

@DonaldLeblanc gets the first gift card!

Very nice @DonaldLeblanc! Quick turn-around. The homage to Jimmy is a nice touch. Here’s his version to save you from going over to the Projects page (not mine): 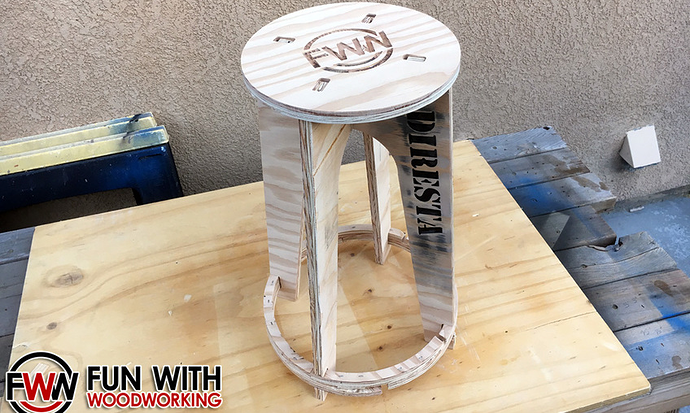 On my Limbert tabouret version, I’m not going to have the keys protrude through the top of the seat. They’ll be 1/2" deep and still register the location and add strength.

@JosephCompton, I’ll make the prototype out of ply, but once it’s good to go, I’ll be able to make it out of QSWO like I do everything else for around the house!

I’m interested in seeing what you come up with. I didn’t want the tabs sticking through either, so I was going to use a thicker piece for the top. I was actually thinking of making a smaller square design that would actually be more useful to my kids, but I’m not sure how much time I’m actually going to be able to put into this.

What if you just didn’t go all the way through with the rectangular holes. Imagine if they were pockets that the tabs slid into but the top of the stool was flush.

is that for every entry a gift card or is it a limited number?

I just upgraded my machine pretty extensively (X stiffening, new Z, LED lighting, dust covers, Y supports, mechanical/electrical fixes,…) and I think this could make a fine first project to test it out

also, i’d like to modify it a bit, but is there a way to get the original SVGs, since Easel doesn’t show me an export button.

Seems like an easily added and extremely useful feature.

Thank you very much! Zach just notified me about the gift card and it was a very welcome surprise!

Thank you very much sir! This was a very welcome surprise!