Do I really need to upgrade my X-Carve?

I have received my X-Carve (1000mm) months ago, and I have been studying the community forums even longer. I have made some nice products (and have broken plenty of bits). As I read the forums, I am increasingly becoming discouraged as I see that my stock spindle may go out, that I need to stiffen my X-axis when I have to get a new spindle, and other things.

I am a newbie that dos not have all of the tools (or desire) to drill additional holes in my X-Carve, and I really don’t want to spend too much more money on replacements/upgrades. Do I really need to upgrade my X-Carve for wood projects (and occasional acrylic projects)? If so, what do you recommend? Does Inventables sell simple upgrade kits for the novice CNC people? I am not trying to become a big-time production shop, but I don’t mind spending a lil more if it is worth it in the end. Thanks.

when i had the smaller spindle i never had a need for axis stiffening mods. the best bang for the buck to replace the stock spindle with a dremel. And if were not for being so greedy i would still be using the dremel. But thats just my opinion.

Unfortunately the upgrading part is what comes with the hobby cost unit. The “mods” most of us do will hopefully be included in the Xcarve 2 if and when they go that route. The X Axis upgrade took me into a whole new area of accuracy the Trim Router much better - buying bits that cost a good amount helped a bit more… now dust collection time … baby steps. And you can do the x stiffening upgrade with a piece of steel from Home Depot some furniture bolts hand drill and a couple clamps.

There’s no need to get discouraged, the base X-Carve is sufficient to do a lot of work.

It’s true that Inventables first had a bad batch of spindles last year, but the one they sent me in August or September from the “new” batch to replace the bad one was running fine up until I replaced it with a Dewalt 611. If your spindle is from the new batch and you haven’t seen any problems, you’re probably going to be fine for a while. If it fails, Inventables has awesome customer service.

To be perfectly honest, you don’t “need” to upgrade the machine by replacing the spindle with a router or by performing stiffening mods. The base machine performs fine. The mods help to enhance it in various ways, but you shouldn’t feel like you have to do it if you’re looking at basic wood and acrylic projects. Once you feel like you’re ready to move on to something that your machine can’t handle as is, or you want to get your projects done a lot quicker, then you should consider the upgrades. Don’t let the journey to CNC master bring you down though, it’s a fun trip because you’re just like most of us (including me) who started at the bottom and are still climbing up toward “capable” status.

Until you’re ready to upgrade, don’t forget that you have all of us to fall back on for support. This journey is a hell of a lot more fun when you’re not alone, even if you’re a severe introvert like me.

Edit I forgot to add that starting with the base model lets you fully appreciate the mods you make. I did the X-axis mod during building, so I have no idea just what kind of difference it made. I had every intention of sticking with the base model, and did so for a few months, then upgraded to the Dewalt and realized just how much faster and better it cut. Then I designed Y axis braces and belt dust shields, and realized what kind of a difference that made to the accuracy of my cuts and machine cleanliness. Recently, I’ve modified the dust boot to add an endoscope to record some of the cutting. If I’d received the machine as-is today, I wouldn’t fully appreciate how I turned it from a good machine into the milling monster it is today.

If you do not want to drill do the 30min mod. Use the search engine to find it. People are satisfied with it and much simpler than having to drill holes in the aluminium extrusion

Or the 60min mod for just a little bit more

What do you mean by “x stiffening” ?

The one that puts a piece of metal between the maker rails and then bolts it together. Some use screws thru the rails and steel or aluminum (flat l or t channel ) some people 3d print a spacer some use bolts several ways but I found the x mod maintains left and right rail perpendicular travel better after it was installed, some say it was to prevent sag from a heavier head stock or router over the spindle but if you push on the left of your x carriage the right does not move at the same pace I felt I was getting missed steps from this. With the mod it stays pretty much the same.

I don’t know if anyone’s mentioned it, but there’s a quick non destructive stiffening mod you should look into. You kust use some M4 bolts and clamp two pieces of 1/8" aluminum on the top and bottom of the X axis makerslides. Total cost for that is less than 20 bucks,

I don’t know if anyone’s mentioned it, but there’s a quick non destructive stiffening mod you should look into. You kust use some M4 bolts and clamp two pieces of 1/8" aluminum on the top and bottom of the X axis makerslides. Total cost for that is less than 20 bucks,

DO you have an image of that?

The one that puts a piece of metal between the maker rails and then bolts it together. Some use screws thru the rails and steel or aluminum (flat l or t channel ) some people 3d print a spacer some use bolts several ways but I found the x mod maintains left and right rail perpendicular travel better after it was installed, some say it was to prevent sag from a heavier head stock or router over the spindle but if you push on the left of your x carriage the right does not move at the same pace I felt I was getting missed steps from this. With the mod it stays pretty much the same.

Any link to it?

Search for the 60 minute stiffening mod

I have a X-Carve 1000mm with Dewalt 611 spindle… and the only modification i’ve made (other then a crappy dust shoe) is the simple bolts to stiffen the X carriage:

(you can see them in this picture… No drilling needed. just push the bolt through, attach the waster on the bottom then the nut… repeat 6 times) 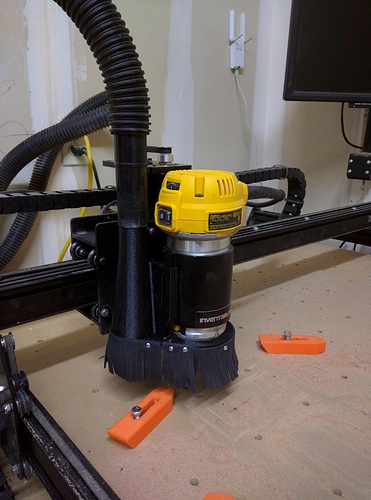 Its a nice to do ‘$5 upgrade’ but you can get by fine without it as long as your not cutting Aluminum. (But for ~$5… its a no brainer)

As for breaking bits… I had never touched a CNC machine until my X-Carve showed up in December. In the 100 days i’ve had it i’ve put ~50 hours cutting time on it (spindle running time). I’ve cut hardwood, softwood, acrylic, pvc and 6061 Aluminum… and i haven’t broken one bit.

I’ve cut into my clamps, plunged into my waste board, had pieces shift while cutting, had ‘tabs’ break and pieces go flying… but never a broken bit.

IMHO… the way to be happy with the X-Carve is to learn how it works. Learn about speed’s & feeds. Learn about what bit to use when. Learn how to do maintenance on it.

Got it, during the assembly I notice that when I move the spindle along the x axis the space between the two rails changes a little.

Thanks. Did you have to do any mods after buying the Dremel? From the video, it looks pretty lighweight. Which model Dremel did you purchase?

Thanks for the reply. I am working on finding better bits as well without breaking the bank yet. Any suggestions?

I checked that out last night, and I plan on possibly going with that, if necessary.

Whoop whoop!! It seems like I will try that first. I too desire better feed rates. Hopefully, this will help.

Thanks Robert for the advice and encouragement. I think I will try the $5 x-stiffening solution first. I saw in another thread about stiffening the y-axis with simple braces and bolts. I will try that too. So besides those two “upgrades”, should I still upgrade to the Dewalt 611? (I really want faster cutting times!) BTW, do I need a new bracket to hold the 611?

The bits I have snapped 1/32" & 1/16" were just part of how life goes I bought bull nosed tapered bits from toolstoday and they were no where near cheap but guys have lived with direct from China bits. My biggest reason is the 1/8" shank in so far 2 reducers for the bosch colt seem to slip too easily. I wanted 1/4" shank so the stock collet on the trim router would hold it. As for upgrading to a router, it depends on what you will be doing. I did a fill 3d sign and it took almost 8 hours with a router I know the stock spindle and dremel are slower and I would not run either of those for such a long project.

no mods just remove the aluminium spacer from the spindle motor and put it on the dremel. The 100 and 200 series fit but i dont know about the 3000 series.