On my new custom 1000mm x 700 mm xcarve conversion I have an issue where consecutive cuts climb in height the farther you get from the center of the stock in both Y directions and it occurs for any length of material.
Y+ 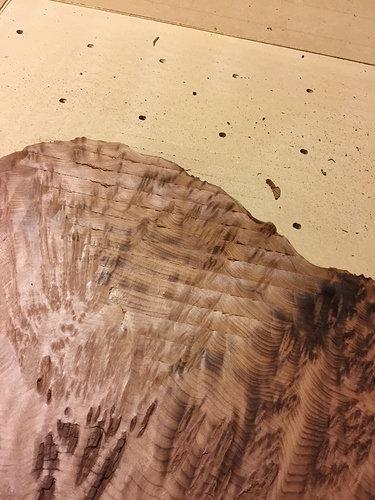 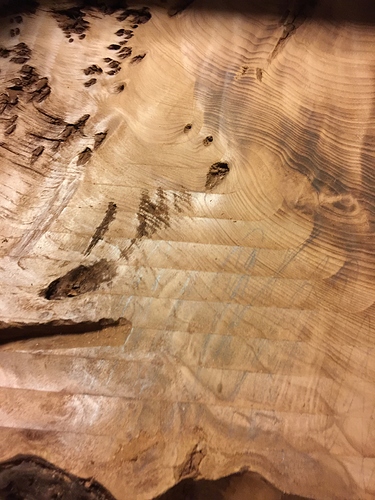 I have supports on the Y rails.

I think that can be caused if your spindle isn’t perpendicular to the waste board, AKA “Tram”.

The problem is if it was that it would cut deeper on one end and shallower on the other. In this case the depth is about equal front to back and with each successive pass both ends climb an equal amount.

The pictures are opposite ends of the same board from the same planing operation the top of the first picture and bottom of the last picture are the high spots. Each successive pass is lower than the previous pass.

Have you skimmed your wasteboard ?
Skimming => Running a wide flat bit at 80% stepover covering the machinable surface, this will level the surface relative to Z

Does your result look similar to the photos in this post?

If yes, look at this post. The lower part of the post is probably a fix in your situation. As Robert said your bit is probably not perpendicular to the wasteboard. Shimming it to correct is a fairly common adjustment.

Searching for “Shimming Z” or Tram will yield more info.

Check how parallel your Y axis is to the wasteboard. The extrusion channels with tee nuts allow for vertical play when securing it. Your actual axis might be tilted front to back causing this.

When I skimmed my waste board at work I had the same problem.
What I did was take my 1-2-3 blocks and set them up under the X-Axis and then checked the beam for being square to the machine. Mine had a gap from front to back, I then loosened the screw that hold them beam (four on each end) and twisted the beam to make it square to the machine and tightened the screws.
this resolved the issue for my machine. 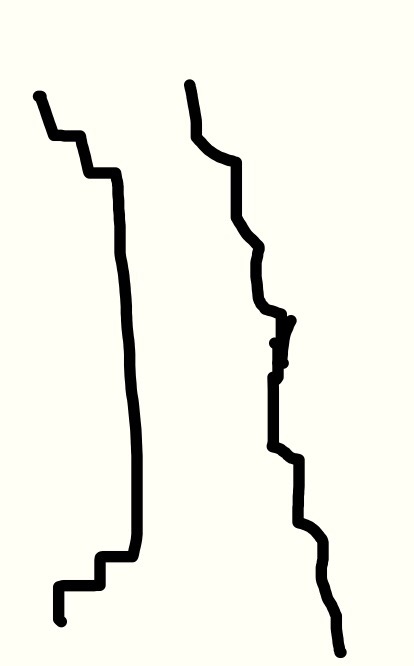 If the z axis was not parallel with the wasteboard I would expect that it would cut consistently deeper on, say the -y axis across the entirety of the piece as shown in the right sketch . That is not what is happening here. As the cutter gets closer to either end of the y axis it is cutting shallower as shown in the left sketch.

To me this indicated the y axis was sagging th the middle so I added a support under each y rail shimmed to be just snug to the bottom of the rail. This did not change the resulting cuts and so here I am.

The board in the picture above is 22” long and this pattern only occurs in the las five inches on each end.

Oh and the z axis is not changing that I can see throughout the planing operation.

Yes and if you look closely at the top picture you will see it produced the same pattern of climbing depth cuts as it got closer to each end of the wasteboard.

1 support under the Center of each y rail.

As to the bit being parallel see my other responses below.

Not my first rodeo and I am stumped here.

I guess I misunderstood what your problem was. Essentially the middle of your machine is a valley.

What do you have the Xcarve sitting on? Is it secured to the surface?

Could it be some weight distribution causing the frame of the machine to sag in the middle?

Not entirely sure I fully comprehend what you try to describe…

I am assuming the wasteboard is flat and fully supported so it doesn’t sag under its own weight.
I am also assuming that your gantry do not flex/rotate during motion.

Is your issue that you get ridges along the X-axis during a wide pocket/skimming carve, in the area coloured orange?
While green area is flat with little/no apparent ridges ? 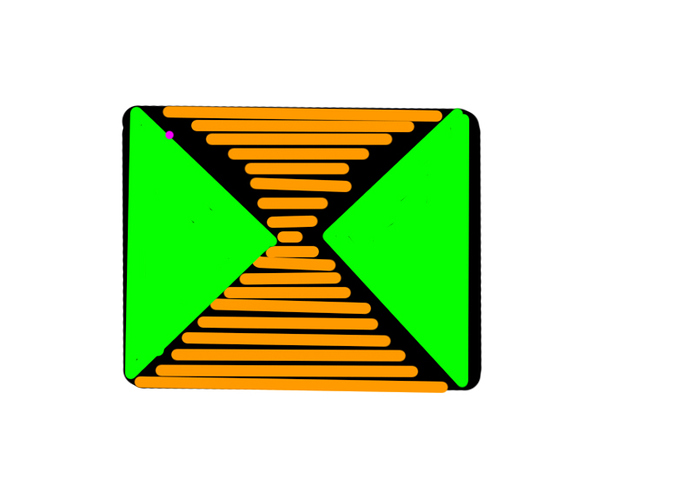 Actually the support was installed after I noticed the issue. I paused the job and made the supports then installed them and resumed the job. No change.

The orange is what I am seeing except just at the last few passes. Others have suggested cutter is not parallel to the surface. Okay I will look at that, except I would expect that one side of the cutter would cutt deeper than the opposite side and this would be true for the entire orange area. I am not seeing that.

The dewalt is tipped forward. The front edge is plowing into the surface.
On front to back, it all passes the front so it’s the same level. But side to side shows the bit angled.
This can be solved by shimming the bottom, where the z attaches the x.

Nope. Again if the router was tipped forward it would cut deeper in the -y all across the surface as it moved in the x. That is not what its doing. The cut is flat and climbs with each successive pass.

Just with my fingernail. Ridges get higher moving out from the Center.

Does you carve start in the middle and go out ( loosing steps). Or start on the outside and go in ( gain steps. Either way wheels, belt, pully, or current, or z screw binding.

I was wondering the same thing. I assume your toolpath starts at X0/Y0 and you are using an offset toolpath cutting from the outside to inside, then your z-axis would be dropping. A while back I had a similar issue, cutting a 3d raster toolpath and my cut went deeper with each pass.

In my case I ended up replacing the wire for the z-axis and found a overtightened (loose) screw at the terminal block on the carriage. Maybe your issue is similar