I know it has been mentioned before but has any progress been made on the importing dxf files straight into easel? We are using Easel in a school environment and the extra issues with scaling ascociated with SVG files cause some problems.

We currently don’t have any plans to support direct DXF import. I’m not sure if you’ve seen the spec for DXF files or not, but they are extremely complicated, which would require a very significant amount of time/effort to implement.

I’m not saying it won’t happen, though.

No, I have not read the DXF spec so I have no idea about the complexity of implementing an import routine for it.

Thanx for feedback, though. Appreciated!

We have an app in beta testing to support DXF import into Easel:

Hi guys, I’m pleased to say that I have been working with inventables on the DXF to SVG app. It has been released today for beta testing. Two things you should know: DXF files should be encoded in ANSI 1252 (standard) and file size should be smaller than 2 MB. We are however looking into some ways to improve this. Please reply here if you run into some bugs or any other problems and try to be as specific as you can. Cheers, Jelle 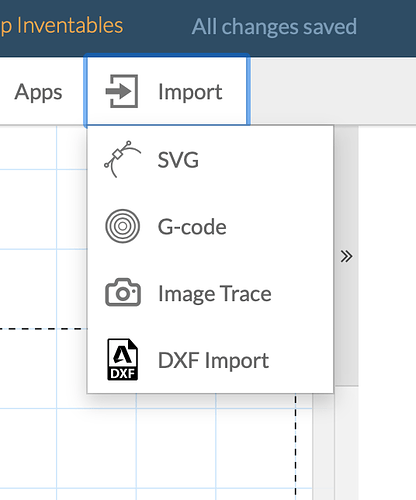 That is correct, this feature has been released. You can read the announcement here: New Features: Project Archiving and DXF Import

I’m going to close this topic to make this more clear.