Currently my 1000mm X-Carve is monopolizing my main work table and I need that back so I’m working on a design for a replacement. My work table is a New Yankee Workshop design that is very solid and has retractable wheels. It uses a torsion box design to keep it flat and as light as possible.

For the new X-Carve work table the top surface is just enough bigger than the footprint of the X-Carve (including the bump out of the Y motors and the furthest forward travel of the carriage) that later I can add a lift up lid to help muffle the noise. I’ve made the torsion box area deeper to include a cavity for the X-Controller (I’ll move the Big Red Button to the front leg) and a drawer for bits and accessories.

I’ve designed this in Fusion 360 and am willing to share the design though it’d probably be best to wait until after I’ve actually built it to make sure everything works out. Most of it is 3/4" ply, but the very top is 3/4" MDF, the top of the torsion box is 1/4 luan, the bottom is 1/2" ply, and the drawer box is 1/2" ply.

I’d love any comments and things anyone spots that wouldn’t work well. 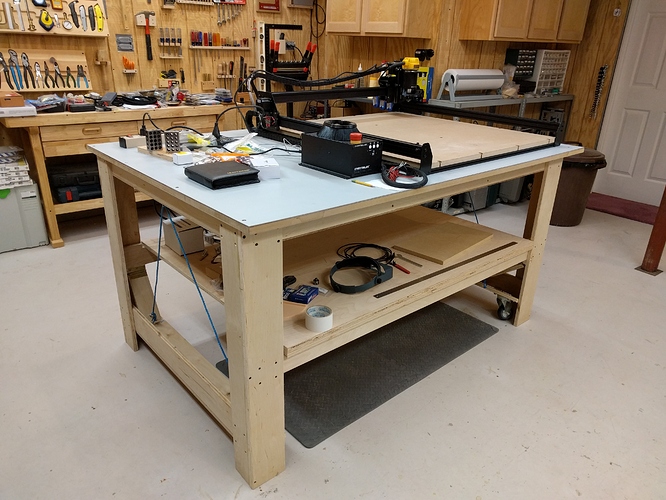 Where does the computer go?

The computer is either going to go on a smaller cart I’ve already got or I’ll come up with a fold down shelf to attach to the side.

The reason I didn’t allocate top space for the computer was that would make the new table the same size as the existing table and I really can’t spare enough shop space for two of them. It’ll be tight even with the reduced version.

I built a drawer for the laptop in the side and a full width drawer in front. Worked out great and keeps the dust off. Just a idea you might want to incororate in yours. 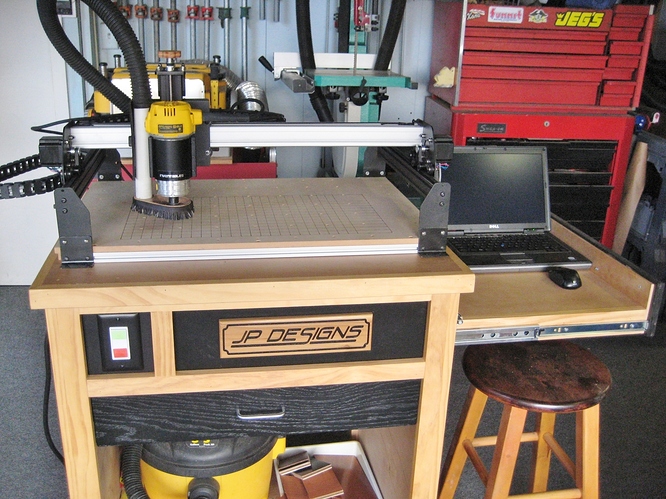 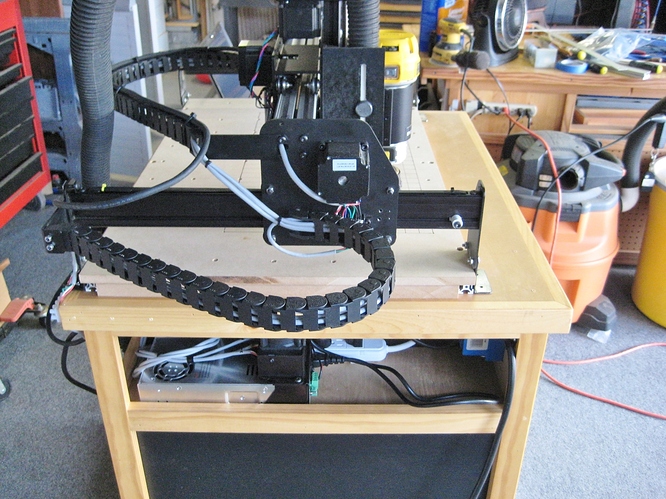 Wow, that’s a nice-looking piece of hardware there. Mine is a LOT less fancy, I mostly went for low cost and high strength on mine. As you can see, I have a very limited space available for it, so I went for a minimal design. The PC that operates it is actually across the room, and the X-controller and relay is mounted down the left side of the bench, out of view here. The top and base are removable separately, it was a necessity to move the table into my shop, hence the handles on the sides. 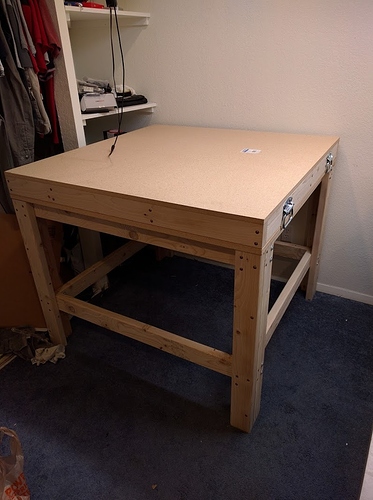 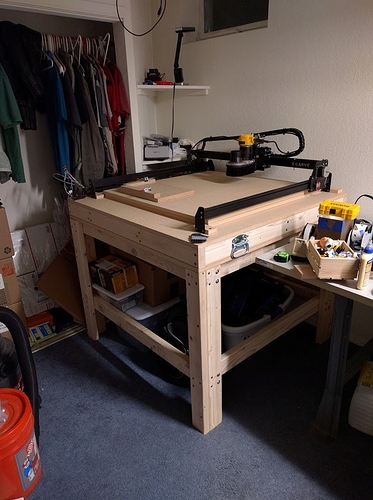 The top is a torsion box, made with 2x4s. Nothing fancy, but it works nicely. I ripped down the 2x4s before use to 3.25", just to make sure they were all exactly the same width, and the top is 46" square to make best use of the 4x8" particle board sheet. 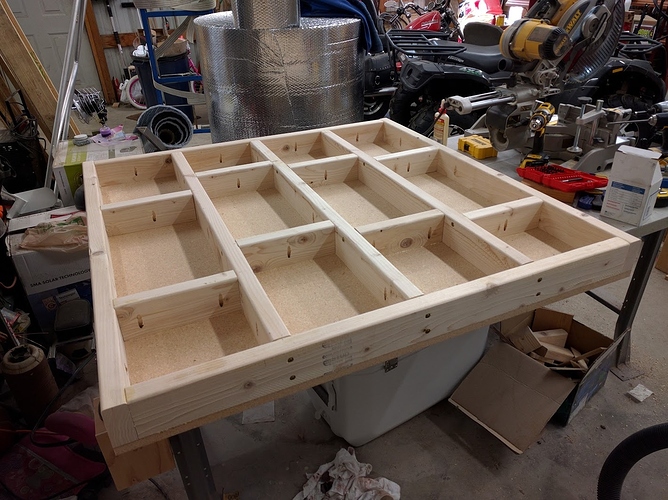 Both of those benches are really nice! In my case I started from the New Yankee Workshop design because I really love the work table I already have, the retractable wheels make it super easy to move yet land and the table is so solid (everything glued and screwed) that me and my neighbors could jump on it and it wouldn’t wiggle.

I’m going to be moving the machine routinely (almost every time I use it, then putting it away), so the wheels will let me do this without any help.

I don’t have a permanent computer attached to the X-Carve, so a dust free drawer to keep that isn’t an issue - when I’m using the machine I hook up my Microsoft Surface to control it. When I’m doing actual design work I do it elsewhere on another machine. 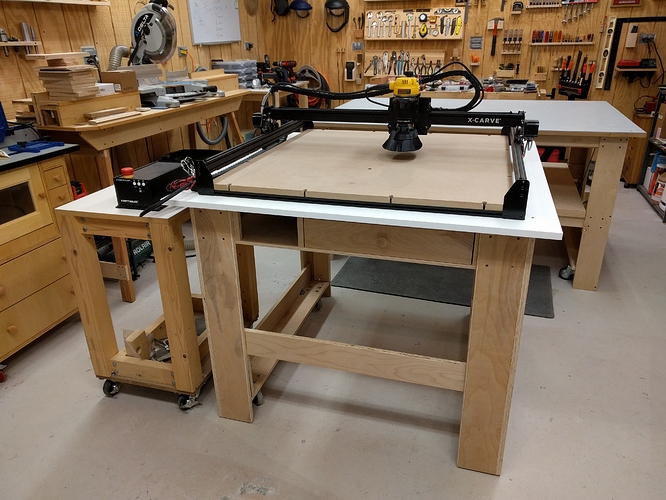 I just finished the new workbench tonight and put the X-Carve on it for the first time. The X-Controller will go in the front hole as soon as I rewire it to take the big red button off the top. There are side openings so I can reach in and deal with the wiring as well as a hole in the back where the power wires come out. I left just enough clearance on all the sides (including the stepper motors) so that I could add later a big hinged box enclosure to muffle the noise. For now the laptop driving the X-Carve will sit on that little workbench next to it, but I’ll probably add a slide out shelf to the main workbench. Behind the new X-Carve bench you can see the New Yankee Workshop table that inspired it. For now I’m just glad to have my main work table free again and the X-Carve set up at the same time. Time to figure out what the next project will be.

Last night I routed the wires through a new hole in the top to the electronics area. To do this nicely I needed some space between the end of the drag chain and the cross rail, so temporarily I just removed the bracket and screwed it to the table top. Eventually I’d like to come up with a new bracket so it’s not directly screwed to the top, but no rush. 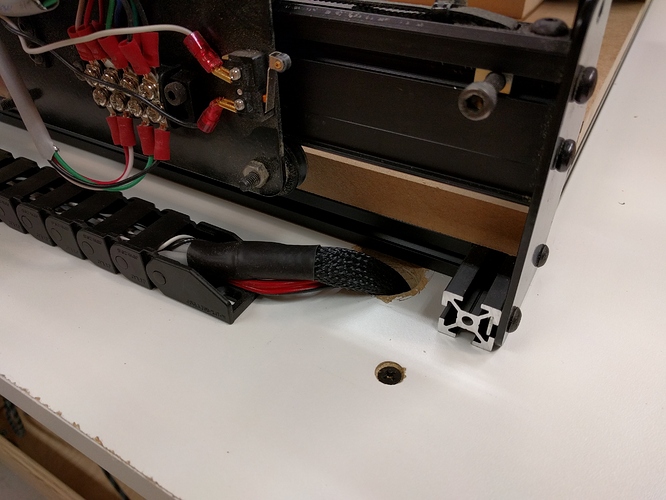 Why? I’d personally suggest taking it the other way, and disposing of the entire lower frame and separate wasteboard assembly entirely. You have a good, rigid table there! Ditch the frame flex, get some more Z, and have a better machine!

That’d sure do it!

I’ll have to think about it. Not sure whether melamine makes a good waste board or not, though it wouldn’t be that big a deal to swap it - it’s only 4 screws.

I removed the internal framework under the waste board and simply attached the board to the torsion top. I gained about 3/4" of z travel this way. If I had just used the table top as a W board, I would not be able to change it out when it got boogered up too badly and the Z might be coming off the bottom of it’s rails when extended down to the surface.

I removed the internal framework under the waste board and simply attached the board to the torsion top. I gained about 3/4" of z travel this way. If I had just used the table top as a W board, I would not be able to change it out when it got boogered up too badly and the Z might be coming off the bottom of it’s rails when extended down to the surface

I also did this.
-Kelly

So what would be the method for doing this - putting threaded inserts in my melamine top, screwing down the MDF wasteboard using those inserts? Do I then use angle brackets to fasten the Y supports to the melamine as well? Or is there a more elegant way?

To be clear, I’d suggest attaching the frame down to the table, then attaching the wasteboard to the table top in its usual spot. You just eliminate the frame, and stiffen the entire unit up greatly by having a solid membrane under it, instead of a flimsy aluminum channel assembly.

I’d like to see some pictures of how you’ve attached the frame to the table - did you just use 4 angle brackets or do something else more fancy?

This is what I use. It encloses the computer and dust collection along with additional storage. 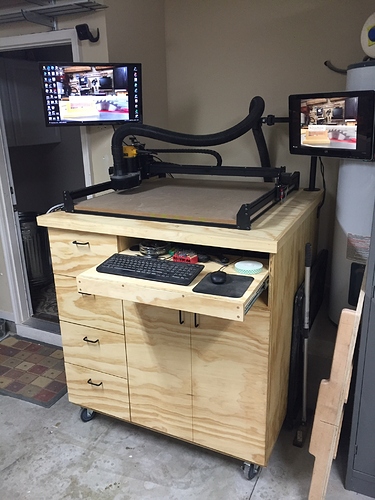 I had melamine for my wasteboard, and didn’t like it. Being able to write on it in pencil was awesome, but the thickness varied enough that I ended up having to either flatten it or put a secondary wasteboard on top of it. Additionally, the chips under the melamine are probably going to dull your bits a lot faster than MDF or regular wood.

I ended up taking it off and am debating how exactly to dispose of it. I did make a video of the replacement process though, so that was a plus.

I don’t think I’ll end up with melamine as the wasteboard. At the moment I’m considering the suggestions which would have me keep the melamine for the table top, fasten the MDF wasteboard directly to the table, and ditch the aluminum bottom frame. Looking for ideas how to nicely attach the 4 Y supports to the table top and have it both serviceable and nice looking.