I posted this on the FB group also but want thoughts from this crowd also.

I’ve been looking to do a Y-axis stiffening mod and it seems that every bracket I have bought has been a millimeter or so off with the slots in the rail. Other than not being the prettiest things in the world, can anyone see why these wouldn’t work? They’re tall enough to attach to the top and bottom slots, which I think would be stronger. I’ve got inserts and screws already, just need some washers.

I’ve got some 1/4” hardboard I can use for dust shields with this.

I’ve also considered going the 2x4 angle aluminum route and getting the benefit of built-in dust shields but that’s about $30 more. Not a lot, but little things keep adding up, lol.

[image] I did something similar but I used 2x4 inch angle which works perfect for a dust guard and stiffener. I got two 4 foot pieces off of eBay for $15 a piece! Works awesome.

Too thin, go with the aluminum angle.

I bought one of these, split it in half and used m5 screws and nuts to fasten both sides. Solid as a rock… 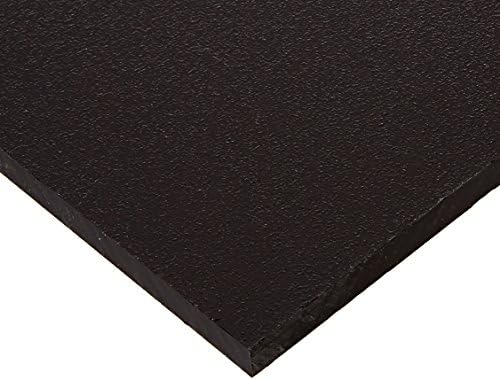 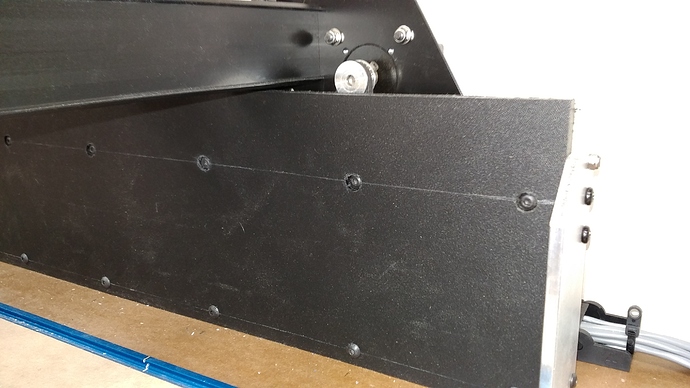 Just ordered the 2x4 angle aluminum from themetalmerchant. He is custom cutting them to length (39.5”) for me and shipping them for under $45. Hope they work as planned

Well, the aluminum arrived yesterday. I’ve got some work to do…

I looked at the post with the 2x4 aluminum sides again and noticed that he’s not using the stock wasteboard, his sits lower so everything fits just fine. I screwed this one up pretty bad. So today I need to cut them to length and take over half an inch off the height. This would be so much easier if I had a table saw.

All done! And it’s stiff as all get out. Hopefully I can get some time to cut something and see if it helped. 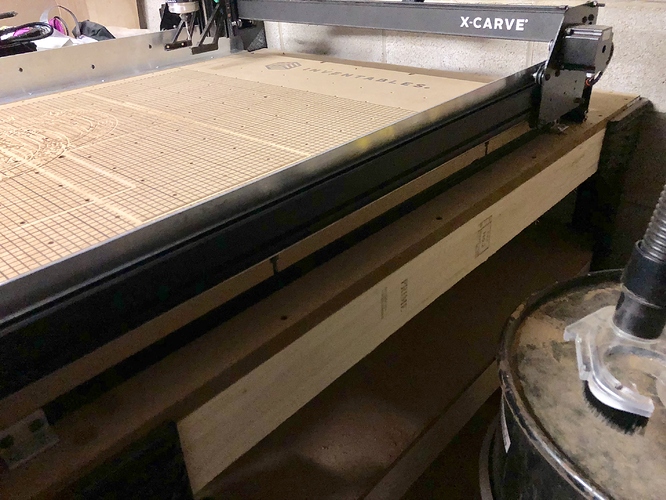 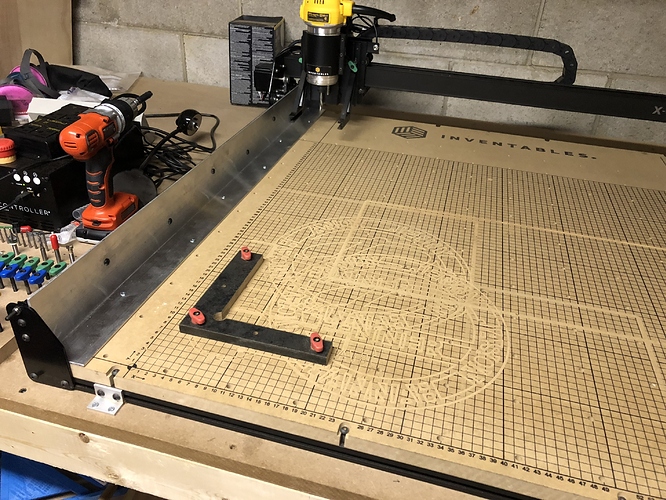 I ran a quick test this morning in MDF. Before the upgrade I could barely do .05" DOC at 50IPM with a .25" 2 flute downcut bit without a pretty substantial chatter on the X-axis movements. Today, I started at .1" DOC at 80IPM and it cut like butter. I kept speeding it up (in Easel) to see what would happen and got all the way up to 160IPM (200%) and it was still cutting with no chatter and looking really good.

Not sure I want to press my luck too much but I’ll try on some other materials and see what happens.

I’m guessing you are talking about cutting MDF? I’ve started ordering parts to brace up both of my Y axis, then finally ordering my linear Z axis.

Yes, MDF. Are you getting the same type of aluminum?

All done! And it’s stiff as all get out.

I like your idea very much and was planning on doing something similar when I move my X-Carve to its permanent home on the bench I am building. In addition to the clearance issue on the drag chain support rail, I also noticed that if I was to “flush-mount” this type of angle to the inside face of the Y-rail, I would have interference with the fasteners that mount the belt pulleys…they protrude past the plane of the Y-rail by about 5/64". Just wondering if you had a similar issue. I double-checked the assembly instructions to make sure I used the correct fasteners and sequence of assembly, and it looks to be correct. I suppose I could “file” the protruding bits flush with the nuts, but would appreciate a second opinion based on installation experience.

Yes they do, and I noticed that the hard way. I put the left side on and tried to moved the gantry by hand. I made a nice aluminum curl. So I took it off and filed them down almost flush with the nut. Just took a few minutes.

Thanks for the quick reply. I’m going to be out-and-about tomorrow, so I’ll drop by the Metal Warheouse and order some aluminum angle.

Glad you brought that up, too. I forgot to mention it in my original post. That wasn’t a pleasant realization for me in the heat of battle, lol. Would have been nice to have noticed it beforehand.

I’m going to use some flat steel plates to mount to the Y axis and the base frame. Probably use some some strips of plastic inside the Y for shields to keep stuff off of the rails/belts/pulleys.

You could just reverse the bolt for the pulley assembly like I did here vs filing them down. Last post has a pic of it reversed. Allows me to take it up to the drag chain rail.

Right? They are nice for hiding wires within the channel as well which is how I have wires running on the 3D Printer pictured above. This definitely made it much quieter! I still hear it from time to time depending on the feed but it’s acceptable now! I appreciate the tip! I was printing some dust guards for the sides to keep the belts and rails clean but the print time was crazy with the big printer being down. I had modeled up some to cut out on the x carve then realized how much easier it… 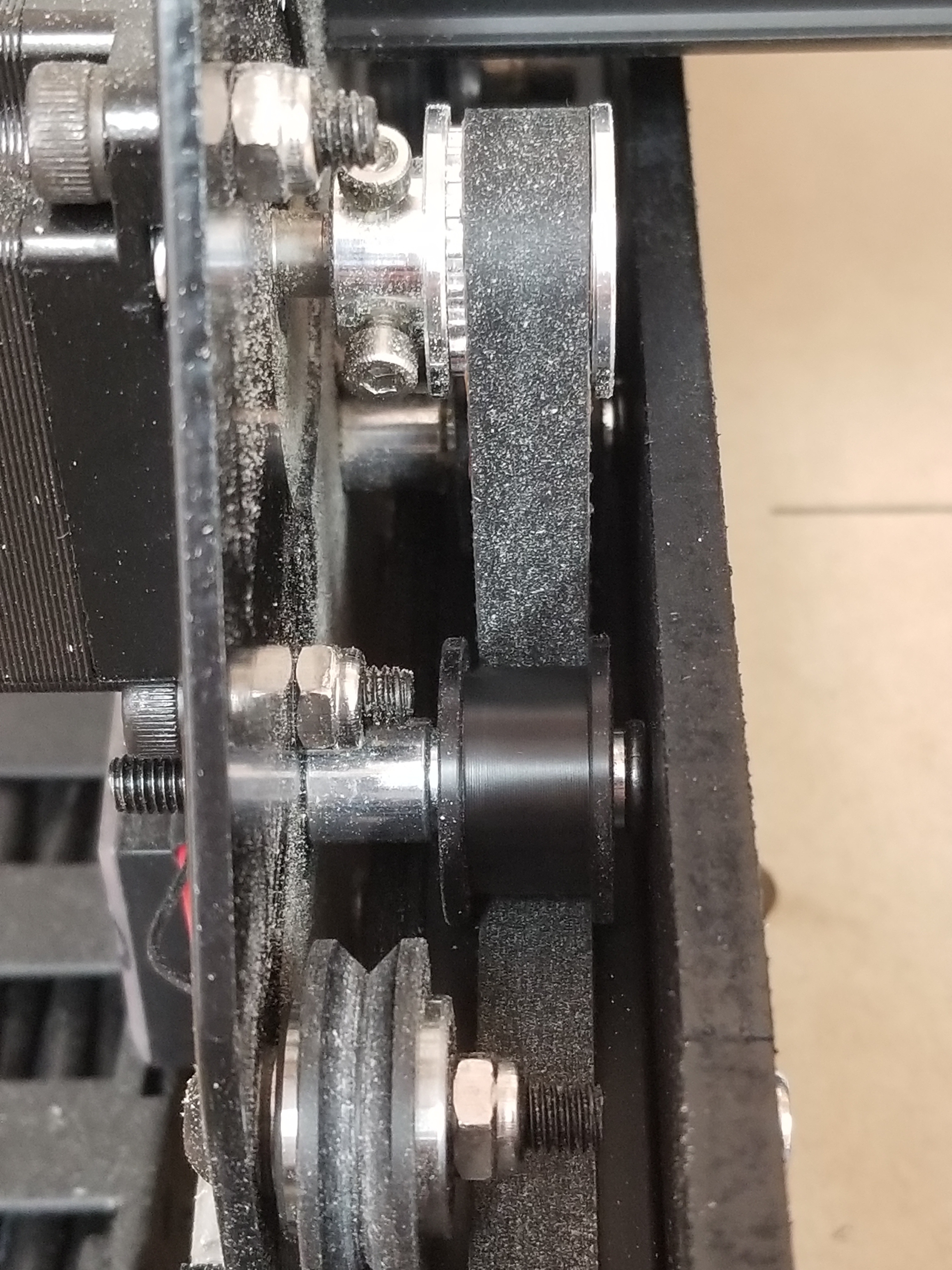 Just remember the new Xcarves don’t have the removable pulleys. They are pressed on so that might be SOL.

However, the new Xcarve has it reversed (here).

His pulley is also different than the “normal” so I guess that’s where I got confused and thought he was flipping that around.

They also swapped the instructions for all the other hardware on the Y plates…interesting.

Good suggestion…never thought of that!!! I’m obviously too OC when it comes to following directions. And yes, I was definitely referring to the idler pulleys. And unless I’m mistaken, going this route, one would be advised to release the tension on the belts first.

Oh yes. I tension mine at the back only so the front are just holds so I loosened the front on mine, redid the pulleys and resecured the front so the tension stayed the same.

The stock bolts will fit, mine are so close to the edge when reversed because I shimmed mine out for the new pulleys for the 9mm belt.