Ok so I had thought I had a RT0700C on order with a local Makita Distributor, and when I hadn’t heard from them after a week I called and found out that The RT0700C is discontinued and no longer available!

That would have been fine if there was a model that replaces it, turns out there isn’t.

Now I can find the RT0700C and the new version RT0701C online but the cheapest I found them from a company that will ship to Canada is $200 CAD. This is kind of a kick in the stomach when I can find them HERE and HERE for $99USD which is roughly $140CAD! Not a bad price.

Now I could look at the Dewalt, and I have but it’s the same situation. But now that I’ve done all the research, the Makita looks like the clear choice.

Sorry if this seems a bit ranty, I just got a little frustrated today trying to find this thing! I thought also that maybe the community might know of any better suppliers either in Canada or ones willing to ship to Canada for a fair price.

P.S. I can get the RT0700CX3, but that comes with all the bases and I’d rather not spend an extra $200 on stuff that will just collect dust in the shop.

Alright crisis averted, I had to pay up a little bit, but not too bad. I found one on Ebay brand new from a re-seller and after shipping a duties it came to $190CAD. Now to anxiously wait about week or so!

How are you planning on mounting the Makita? I am about to pull the trigger on an xcarve but, have heard good things using an alternative spindle like the makita.

I’m going to use the Dewalt 611 mount that Inventables sells. I have a piece of 16ga plate that I’m going to attempt to bend into a shim, hopefully it works. I’ve seen a lot of people do it like this on the forum, not with a steel plate but lots of 3D printed shims and other materials.

I would definitely recommend the Makita if you can get it. From all the research I’ve done, it’s a pretty impressive little trim router.

I think the X-Carve that the Inventables guys have in their office fitted with a .8kW VFD spindle uses the Dewalt mount shimmed with polystyrene. The Makita has a similar body diameter (Makita is 64.75mm and the .8kW spindle is 65mm).

I decided to go with the Makita as well, and oh man… I hear ya on the woes of obtaining it. The cheapest one I found here in NZ is for $270NZD with works out to be $180USD or $237CAD. Not to mention that they are hard to find for price shopping here. This is just for the unit without all the extras.

Disheartening when they go on Amazon for $99USD… 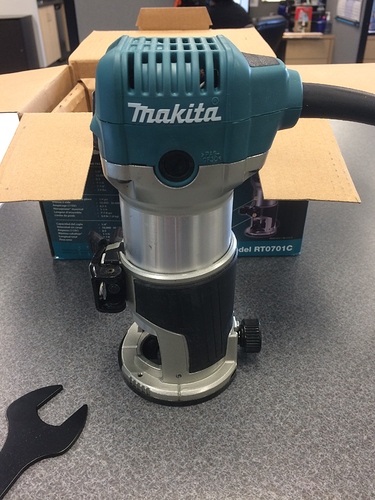 Any chance you can post video comparing the noise level of the 24v and the Makita?

Compared to the 24V the makita has a pleasent sound. My 24V had this really annoying high pitch sound to it that drove me up the wall and seemed to go straight through my hearing protection things.

I’m not having the same experience with my 24v, but the extra power of the Makita will be nice.

Guess my 24V is close to dying then. Good riddance in any case!

For sure, once I actually get it mounted. I was having a little bit of trouble last night with making my shims. My 1/16" aluminium flatbar is turning out to be a bit more difficult to get into a nice circle than I thought. I might look for some plastic during my lunch today.

Any recommendations on the type of plastic I should look for?

I know that Inventables shimmed their VDF spindle in the 611 mount with styrene sheets, so there might be an option. I will probably look for some Alu tube or a thin PVC pipe when it comes time to install the Makita on mine. If you have Delrin or Acetal lying around you could cut some rings maybe.

Ya that sounds familiar about the polystyrene sheet. I just went down to a local plastic supplier and asked them what the would recommend. Honestly I’m not sure what they gave me, it’s a clear sheet, 0.06" thick and I want to say it’s poly-carbonate (I could be wrong).

It was really cool actually, turns out the older gentleman that was showing me around was the owner! He took me on a full tour, they have 3 huge CNC, big enough for 2 full 4’x8’ sheets of anything! The also had a massive vacuum former and material galore! I had to make sure I didn’t spend all day there. The owner turns out to be semi-retired so he was just happy showing me around! Left with the shimming material I needed and a good chunk of 1/4" Lexan free of charge!

I will definitely go back there! Hopefully this shim works!

Nice! Sounds like a place I’d like to go visit. Though, I wouldn’t be able to take my wallet with me or it would come back empty.

I was able to do a little bit of work last night to get my Makita mounted. The 0.06" polycarbonate shim worked great!

After trying to gradually heat up the shim with a heat gun to get it to form to the router, my wife came into the garage and suggested I should just put the shim into the mount and then put router into it. Which of course I thought would never work as the shim might break, but it wouldn’t be the first time I was wrong and it’s certainly not going to be the last!

After taking my wife;s suggestion, the router just slipped in perfect, once it’s all installed the shim is a little shorter than the mount so it would be seen. Hopefully tonight I’ll be able to get the router up and running! 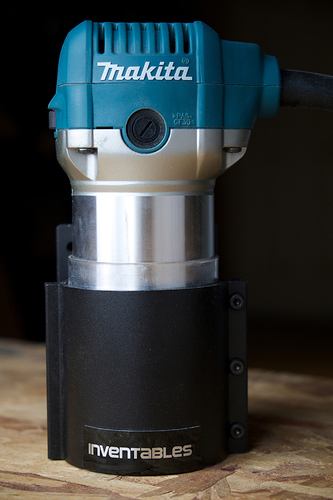 One thing I noticed is the Inventables badge isn’t center, which is probably going to drive me insane. I may have to remove it

That will surely soften the blow, but I think you under estimate my OCD! 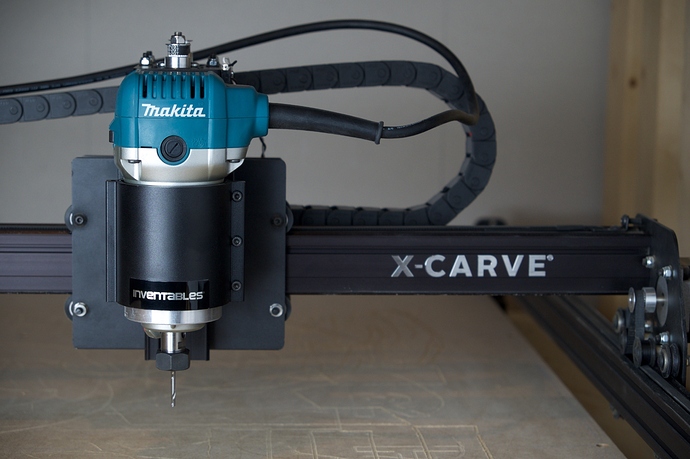 @sketch42 I did record a sound comparison, I will try and get that up here at least by this weekend!

Edit: I am seriously thinking of painting my blue part black…