Wow… how do you even do that?!

How did you fashion your shim?

You may laugh at this but until I can get a sleeve of 1.5 to 2mm aluminum, I am using an apple sauce can, a tuna can, and some of the disposable baking pan aluminum. I cut each to the same size and wrapped the Makita in them and then slipped all of it into the 611 mount. It did the trick though and the surface that I just finished milling is just as smooth or smoother than before.

That is awesome! Resourcefulness at its best! Sounds like it works better than me solution though.

I found another issue that was adding to my ridges, I guess my x-gantry was out of square. It was small, about 2mm, but once I fixed it everything seems to be cut not bad!

Could one of you gentleman do me a favor?

I am trying to find the actual weight of just the Mikita spindle. Not the wiring or base, just the spindle weight. Can one of you help me out with this? 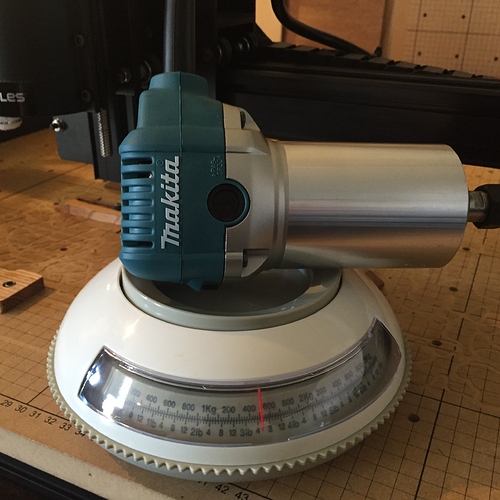 Heh, now to re-square the machine…

Thank you for taking the time to weigh your unit for me. Much appreciated

Sorry I didn’t get back to you on this sooner, but now that I have gotten some good use out of the Makita I can tell you that this thing is great. It barely gets warm. The projects I run are usually no longer then 30 minutes at a time, but I’ll generally run a couple. Even then on a 30 minute cut with the stock spindle I could barely touch the mount where the Makita is maybe slightly warm (almost can’t tell if there is a temperature change).

I haven’t used the DeWalt so it’s kind of hard for me to have an unbiased opinion. Lots of people love the DeWalt and it works great, although through the research I did the Makita seems to be the better router, only slightly, but still here are a few points in favor of the Makita

Please someone correct me if I am (I probably am), but those are the few things I found out. Also I’m a fan of Makita products so that was another factor for me.

At the end of the day, either one will be great, good luck deciding!

Thank you Rusty. Much appreciated.

I am a router junky. I am almost embarrassed stating how many routers/trimmers/rotary tools that I own. But I do not own the Makita. I have five of the 611s already. Three are purposed for a specific task and the other two are for general use, one with the plunge base and one with the standard base. I also have multiples of the Colt.

My biggest concern is which model works best for this purpose. And what I mean by “works best” is which one gives the most accurate cut when mounted on the X carve. Bearings and Run out makes up a Huge factor. Speed control can be controlled one way or another with some modifications to the system, so it is not a major factor for me. I haven’t worn any brushes out yet on any of my 611s so I haven’t even looked at the difficulty at changing them, but as long as they are serviceable, then I can manage as long as they don’t keep burning out, but that probably signifies a different problem elsewhere. I don’t seem to have a problem with clearance of the z axis as long as my router is turned a certain direction.

It would be nice to have a side by side comparison of the bearings and the runout of both machines. This would definitely make up my mind.

I can see advantages and disadvantages for a heavier or a lighter spindle, either way. As Long as the Z axis (and X&Y) can handle the load without deflection, the heavier spindle could be the better choice.

I do have to admit that I like the LEDs on the 611, but that is not a deciding factor. I could always add better LEDs to the dust shoe.

Thank you for taking the time to post the list. I am still leaning toward the 611, mainly bc I already have five of them and I am familiar with them. To each their own though. Thanks again.

Never heard of a router junkie before.

Makita is maybe slightly warm (almost can’t tell if there is a temperature change).

Thanks, Rusty. I’m thinking about getting the 611 mount and 3d printing a shim for the Makita. Heat would definitely be a factor with plastic. I haven’t used my stock spindle yet, so I have a little time before I have to decide which say to go. Hopefully, I got one of the better ones, but my X-carve order was fulfilled right in the middle of the problem time.

No problem! Even if you do have one of the better stock spindles I’d still suggest using the Makita. When I was using my stock I was cutting at about .03" DOC and 65ipm in MDF. Now with the Makita I’m cutting at about .05 - .1" DOC (I’m having some rigidity issue that prohibit deeper cuts) and 110ipm and my cut finish is much nicer!

What kind of mikita is that?

The model number varies depending on which country you are in. In the USA it’s the Makita RT701C