Ha! That’s great, makes me think of the Joker from Batman!

So I was able to get some cutting in yesterday and today and I’d have to say WOW! I did measure the dB and even though the stock and the Makita were pretty similar under no load, the Makita has a lower pitch to it making it much more bearable!

Once it’s cutting there is no contest, the Makita almost doesn’t change in sound level, where the stock spindle sounded horrible. I do have the recordings of the no load sound level, but haven’t had a chance to get them up on here.

Prior to changing out the spindle I was starting to get misaligned cuts, just slight ridges in the sides. So with the new spindle I decided to re-adjust everything, pots, belt tension and v-wheels, unfortunately I’m still getting the same misaligned cuts!

I know I’ve read on here many many times about the issue and I feel that I have done everything. Maybe in my frustration I’m missing something so I thought some one with a fresh look at it might have some insight! Here’s my setup and results: 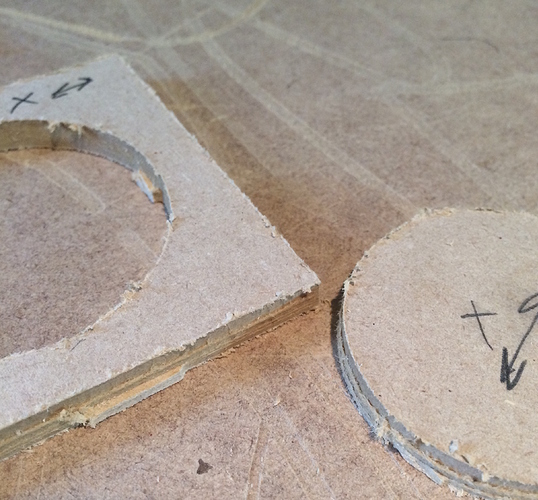 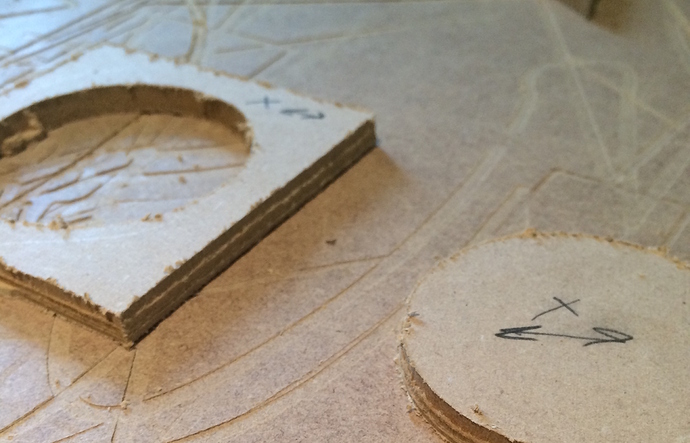 I have my Y-axis stepper pots basically at the highest it can go before thermal shutdown, so I would really feel comfortable going any higher there (I’m already a little uneasy at how high it is). Ridges are all around and the bit is square to the waste board. Thanks for any insight!

Is there any play in the front back of your spindle carriage? Push pull on the spindle mount and see if it moves…

. I’m going to try and back off my belt tension a pound.

Have you checked for “squareness” at the bit?

Yup, I would say it’s pretty bang on in both directions. I just backed my belts off and going to run a test cut.

I’ve adjusted the belt tension down to 1/2 lbs @ 1" and there seems to be no visible change. Here’s the funny thing the edge in the waste portion is perfect! I fell like I may be getting close. It’s interesting that it’s consistent on all sides.

Quick Update, changed out the bit to a straight 2 flute and the edge has improved. The ridges are still there, just not as pronounced. I upped the current a bit, but now we are really encroaching on that max mark, pot is at about 1 o’clock position on both x and y.

I checked it by touch when I first put it one and it was definitely cooler than the stock spindle. The stock spindle I couldn’t even touch after it was running for what I thought was a short run (maybe 10mins). I check it again once I get going with some bigger projects and let you know!

Now to get this offset sorted!

I think I’ve got this dialed in as best I can now. I’m running way faster now, it’s great! Just did a project last night at 2000mm/min and 1mm DOC. I’d like to get my DOC up a bit, but I’m still getting some slight ridges in my cut (which are more pronounced the deeper my DOC is). I think I narrowed it down though!

The ridges are on all sides, my belts are tensioned well (I went from 3lbs @ 1" to 1/2lbs @ 1" and there was no difference in the cut for me). The V-Wheels are appropriately tightened and the steppers are getting probably almost too much current (no thermal shut down yet). I threw a square onto a cut last night and it is not square! Getting so close I can taste it! The problem here is that the router is square in both directions. I’m now lead to believe I’m getting some bad run out from my 1/8" bushing adapter. The cut seems to be getting progressively further out as a pretty constant angle, it’s slight, but it’s there. So I’m off to order some Elaire collets! It’s too bad the shipping is about the same price as the product itself, but I’m sure it’s worth.

Ran a test last night before I went and ordered those Elaire collets (I probably will regardless). I removed the 1/8" bushing and ran a quick job with just a 1/4" bit. And unfortunately, no change in edge quality.

Now I’m starting to think that it might be my router mounting. I used a 0.06" shim to make the Makita fit into the Dewalt mount and when I tighten the mount the mount in totally closed (if that makes sense). Basically I’m thinking that my shim isn’t thick enough and the router is shifting slightly.

I’m going to look for a better shim, but I was wondering if @InventablesXcarve is working on a mount for the Makita / VFD spindles. Maybe @Zach_Kaplan can comment on this, I thought I had read somewhere on the forum that there was a mount in the works for ~65mm diameter spindles.

Rusty - get that 3d printed spacer. Works great for me.
Check 3dhubs.com. There might be a guy with a printer just across the street.

I have been selling some Makita mount through the forums lately. Designed by another forum member and machined here in San Diego from aluminum. I’m selling them for my cost (which includes shipping) for $95. I have one left if your interested. The main thread for the mount is here:

Thanks, I will keep it in mind if my other solutions don’t work out. $95 US is a bit steep for my wallet right now, but I don’t doubt that they are worth the money!

I went ahead and added a layer of bottle to my mount and the cut has improved! Still not perfect, but better than before. The cut is still slightly out of square, which is causing the ridges. The router is still square in the mount, so I’m lead to believe that there is still a bit of flex in the mount while cutting. The flex is in all directions so I doubt adding the X-gantry stiffening mod is going to change this much (I do plan to do this in the future).

I’m still hoping for a 65mm Mount from @InventablesXcarve (@Zach_Kaplan).

I’ll try to remember to get some photos of the cut edge up tonight.

Mine just came yesterday… I’ve replaced the smaller spindle mount with the Dewalt 611 mount and I’ll be wrapping with aluminum and inserting the Makita today. The Elaire collet is in the mail and hopefully will show up next week.

It’s all coming together and I’m pretty excited.

That is very exciting! I have some aluminium, but I’m having issues get it bent into a good shim. Good luck, you’ll have to let me know how it goes!

I have it shimmed and square, so I’m going to try to mill a pocket tonight.