A number of people here have been using my Halftoner software, so I was inspired to make a few additions. I’ve posted an updated version to my website, here: http://jasondorie.com/page_cnc.html

This one adjusts the spacing of the “offset odd rows” setting to make the dot spacing even both horizontally and vertically, which should help prevent your surface layer from chipping off from the holes getting too close together.

I’ve also added a new “circles” mode, added options to move the center of the circle or squares mode, and added image adjustments for brightness and contrast to the program. It always bugged me that you had to use an external program to adjust levels before running Halftoner. 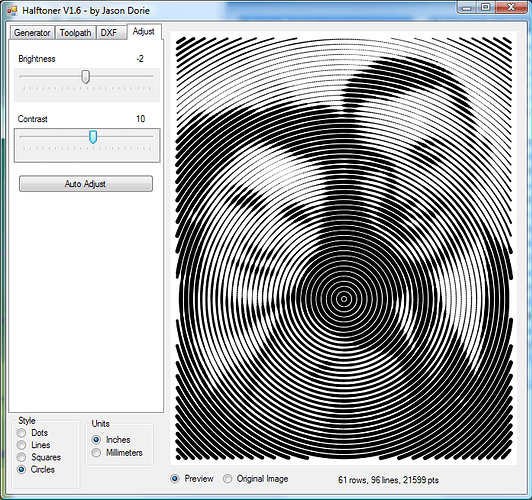 I’ve downloaded the previous version, and keep trying to find a good picture with minimal background to use it with. This addition looks like it makes your program even better, thank you so much for sharing it with us! If I make a project video, I’ll see if I can make you famous to the 200 people that would watch it…

The backgrounds don’t matter as much as the subject. As long as you’ve got good contrast and the details aren’t too small for the size of your cut, they generally look pretty good.

First off, thank you for your program Jason Dorie!!!
I really enjoy it and will be making some Christmas presents with it!!!
A quick question though…
If I have a pic and I don’t want the background in it, is there a way or free program that I can remove the background?
I have a pic with pure white background but it’s making thousands of dots that I don’t want in the pic (all around the subject and out to the edges of the pic).
I could greatly speed up the length of time for making the dots version if I knew how to do that!
The pic is on my computer and I’m not around it, but I can post it if needed.
Thanks again!

just curious, I was just watching your video on your webpage showing the process. I was curious how the master does it lol
what brand of bit are you generally using for your halftone carves?
I also like the idea of that big roll of tape stuff. gonna look into that as ive been using your program like crazy.
I have a 3 flute 60 degree v bit that I paid like $60 from lee valley in Canada and I’m not sure if its just me, but I’m not entirely happy with it.

If the background really is white, and the holes it produces as small, you should be able to increase the “Min Size” value a little to remove those dots. Choose a value just large enough to eliminate the unwanted dots, but not so large as to remove detail from the image.

If you want to paint out an actual background, even something like MSPaint can work, but there are better programs out there that are still free.

Hi, what program is required to send the gcode to the machine. I am learning and have no much experience. Your respond will be appreciated.

I use a 2-flute Grizzly Tools V-bit. Narrower angles are more forgiving, and the sharper the better. I’ve also used these: http://www.toolstoday.com/p-6009-in-groove-cnc-insert-engraving-tool-body-replacement-solid-carbide-insert-knives.aspx
Those are nice because the blade is replaceable, but it needs a router that can hold a 1/2" shank. They may have a 1/4" version of that.

Thank-you for a great program.
One thing you might consider is the ability to output a bitmap file for laser etching.

Jason - I just switched to these 60 degree bits - they last 10 times longer than the big box bits and are cheaper. Plus, they work great in metals. Just an FYI:

Woot more things to play with.

I can get it loaded into USG as a text file but when I run it, the Z axis moves but the X and Y don’t. I get an error at the startup saying N110, T1,M06 unsupported

I have heard that there are issues with the latest version of USG, so depending on which one you have that could be it. Check here: USG T1M6 error

Let me make sure I’m doing this right I loaded my image and got it how I wanted. Then I saved the g code and loaded that file into USG. I saved a dxf as well but Aspire locked up every time I tried to calculate it

I was having issues with the nightly build of UGS when I had the Tool change g-code in the file (T1M06)…removing this stopped the odd behavior.

Where do I change this?

That’s not uncommon - It’s not actually locking up, it’s just taking a REALLY long time. Aspire & VCarve don’t do a good job with lots of small paths. My guess is that the part of their code that figures out which paths overlap / intersect is comparing every path to every other path, which is grossly inefficient, but would only show up as a problem if you had thousands of paths instead of a few dozen. Try selecting a sub-group of the paths (like, do a quarter of the image at a time) and it’ll likely be ok. By grouping them manually you’re kind of telling Aspire / VCarve “these paths have nothing to do with those ones over there, so ignore them”.

It’s also possible that you need to join the DXF vectors first. This is likely only a problem if you’re importing something other than just dots, because I have to use a combination of lines and arcs to represent the image, and I can’t figure out how to tag them as a single connected path in a DXF.

If you can get USG to work with the GCode from Halftoner it’ll be easier overall. It’s much simpler for me to generate the GCode because I have more information about what you’re doing than Aspire can - the paths will be more optimal and will hunt around less.

or if Halftoner allows changing the header of the g-code it produces, remove it from there.

It’s not an option in Halftoner (yet) but you can easily remove it with a text editor. Open up the gcode file in Notepad or something, delete the line that contains the T1 M06 code (there should only be one, near the top of the file) and save it back out.