Progress report on my attempt to go bigger.

I originally purchase the 500mm Shapeoko2 set. Then ordered the 1000mm rails. But I really wanted to use full sheets of plywood with their 4ft widths. I noticed that if I could combine the old 500mm with the 1000mm then a I could fit the 4ft sheets and by sliding the sheet through I could theoretically cut on a full 4x8 sheet. I have heard that such a long axis may become prone to going off square but so far after a few projects the machine is holding up great. 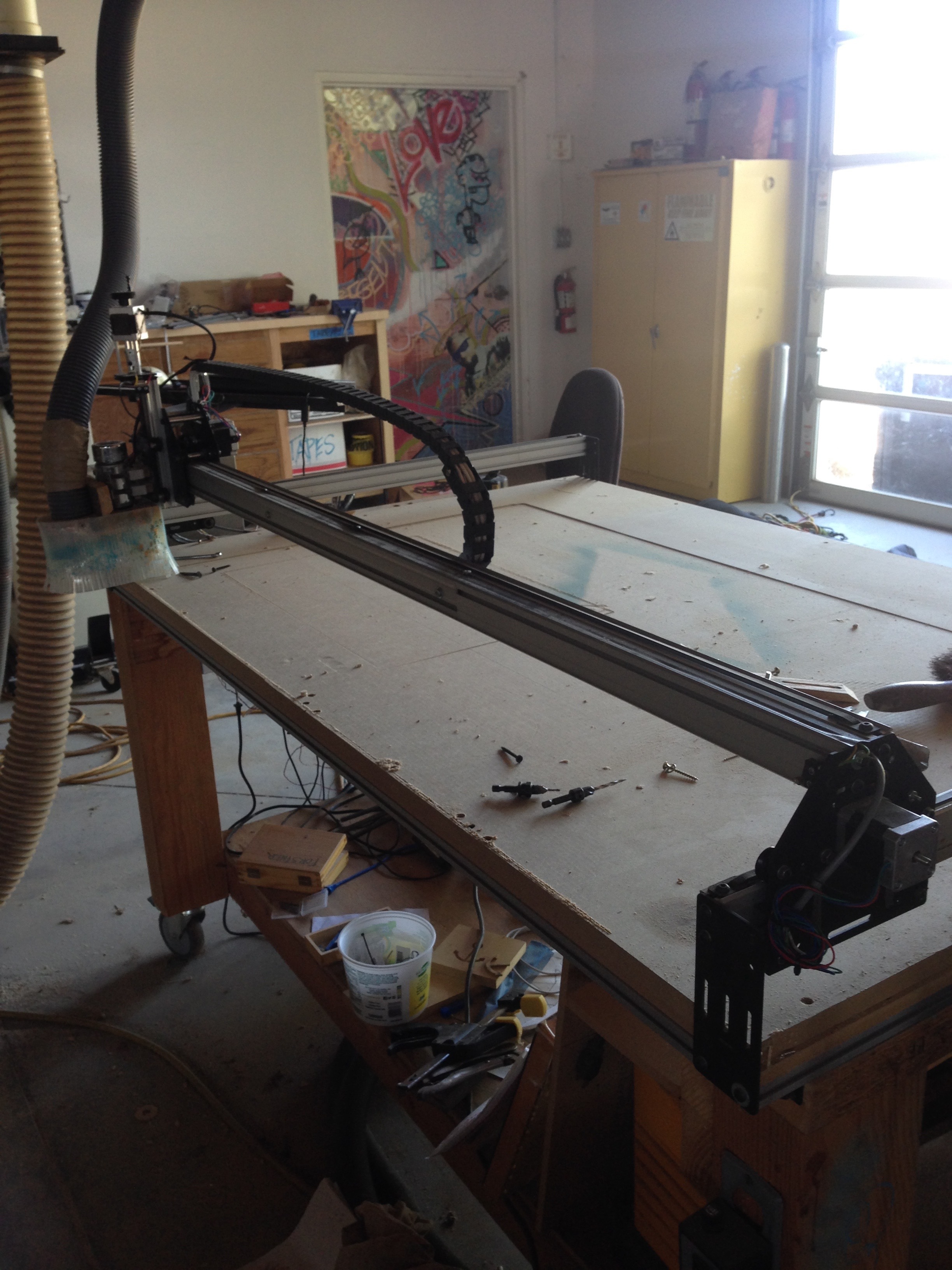 If anyone is curious. I combine the two makerslides by tapping both top holes that are in the middle of the makerslides. Then put a piece of all-tread (screw with head cut off) in holes and screwed the two pieces together. This took some wiggling so that the slides lined up pefectly vertical and tight together. To keep them from unscrewing I found a double T-slot nut to go into the bottom track. For holding the two makerslides parallel and avoid twisting in the axis 3 bolts were used with spacers in-between the slides. 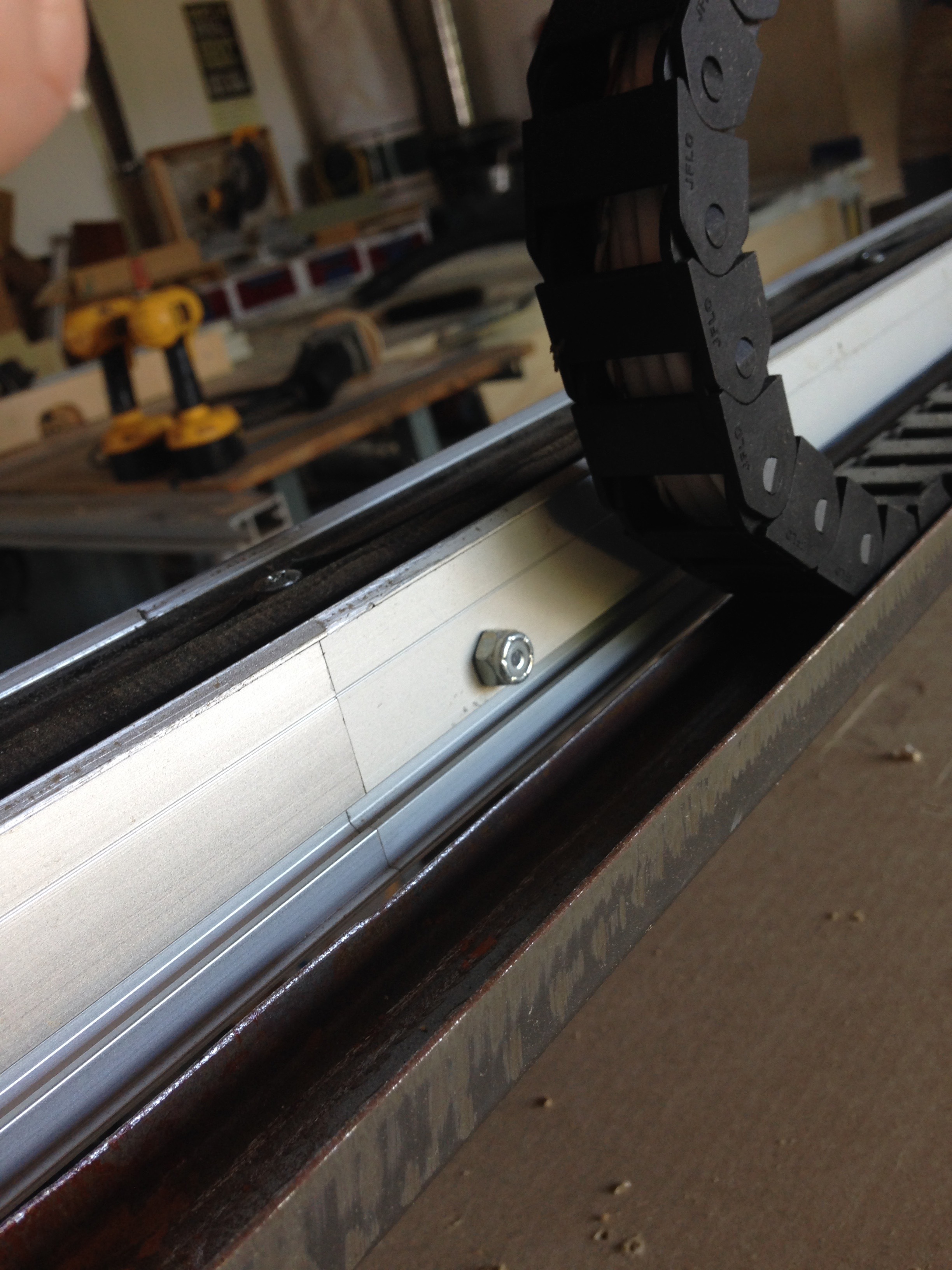 Pretty cool. It’s similar to my setup. Only difference was I used full 1800mm lengths. 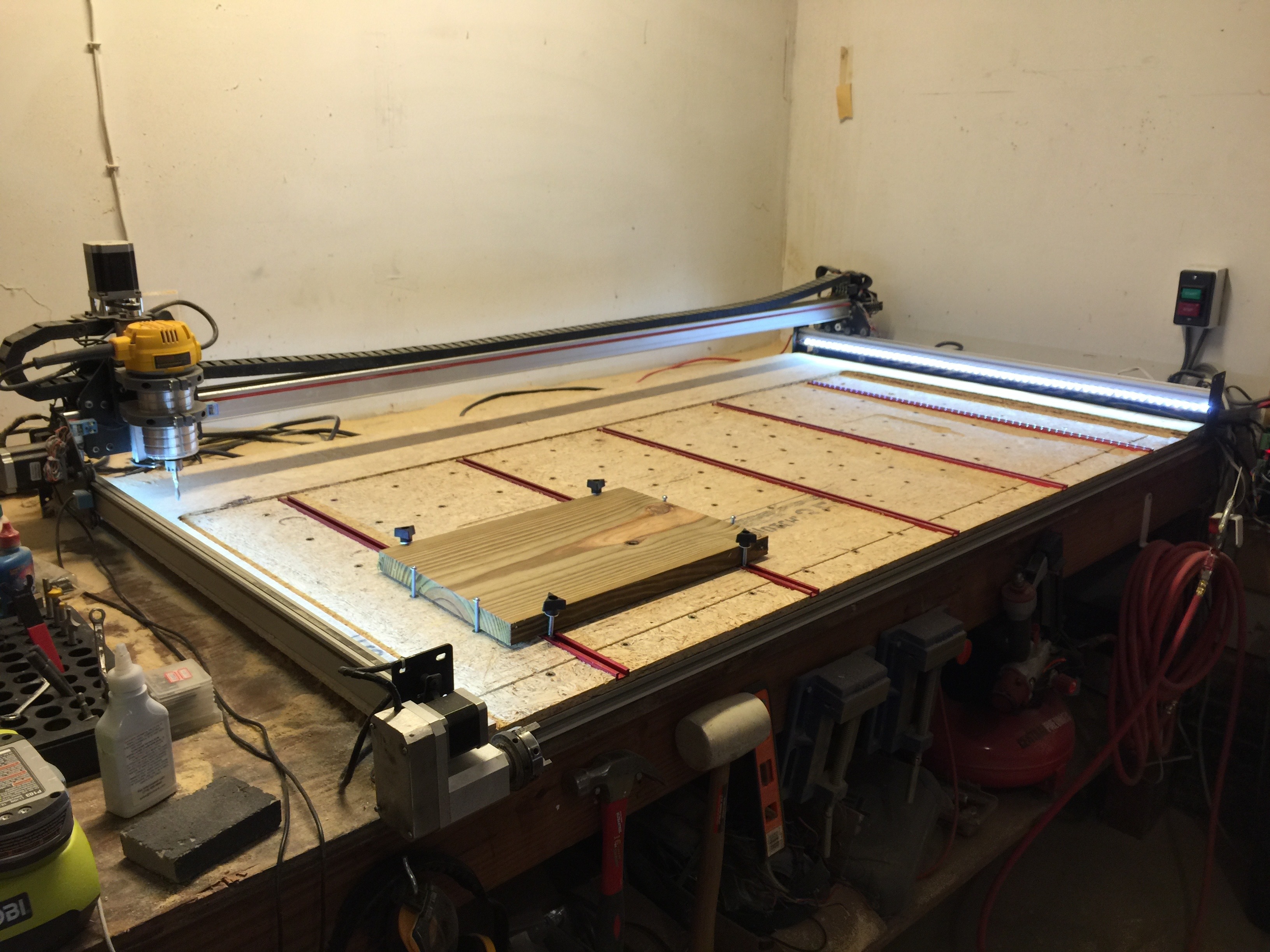 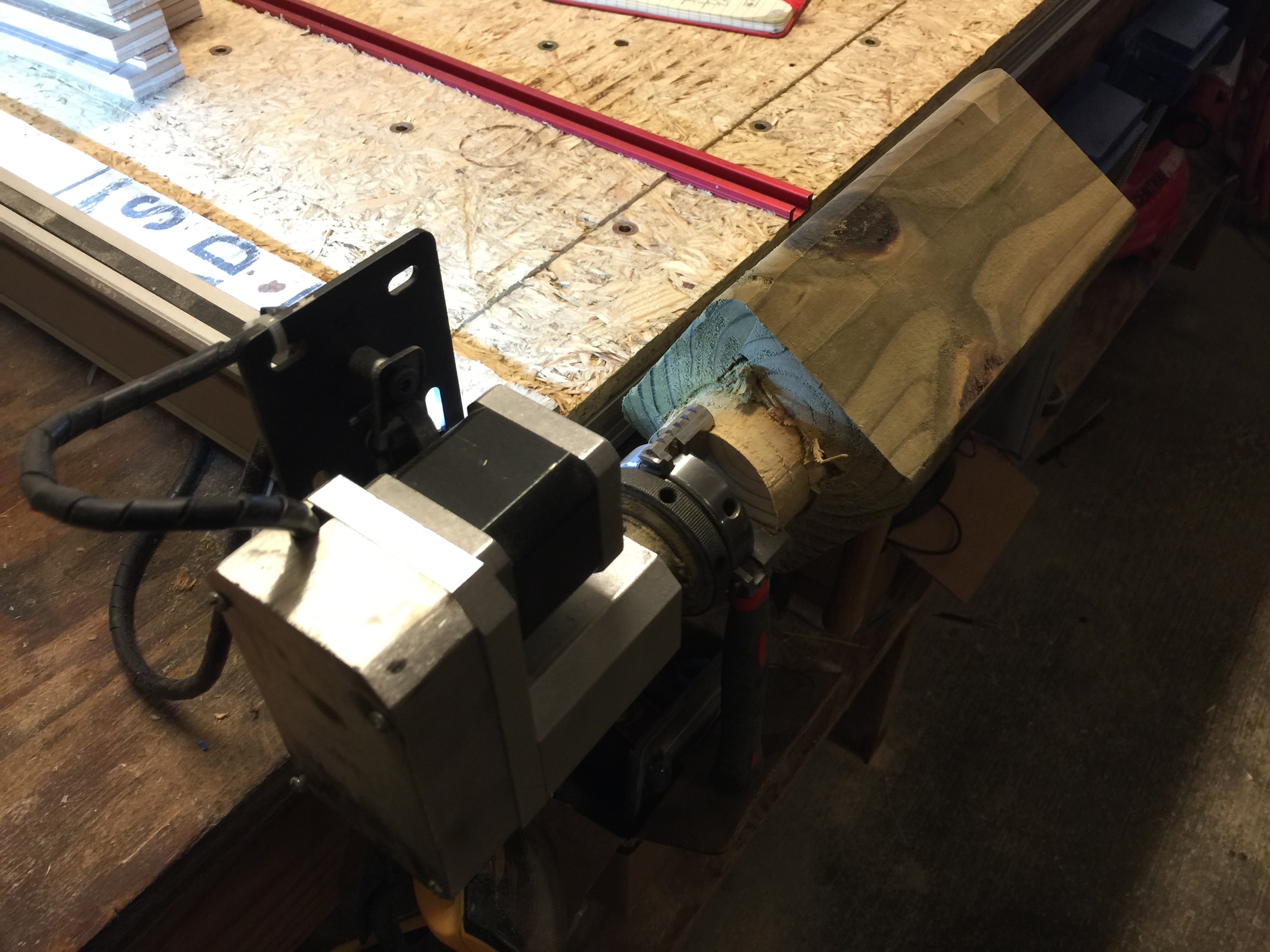 So cool. I’m considering going to a bigger spindle like a trim router. I see you went to a larger z axis stepper. Can we see more of your set up?

Sure. Took these today. 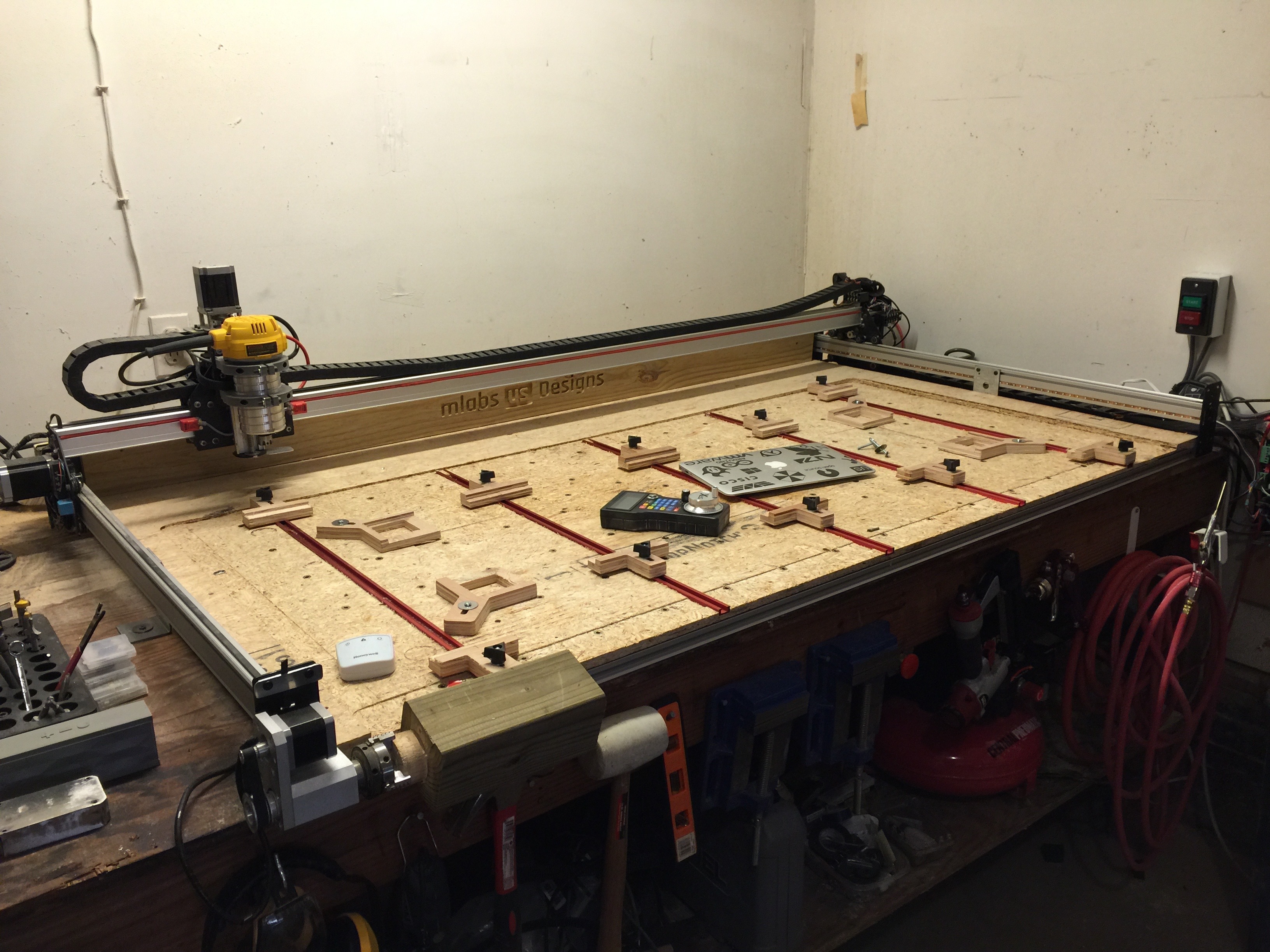 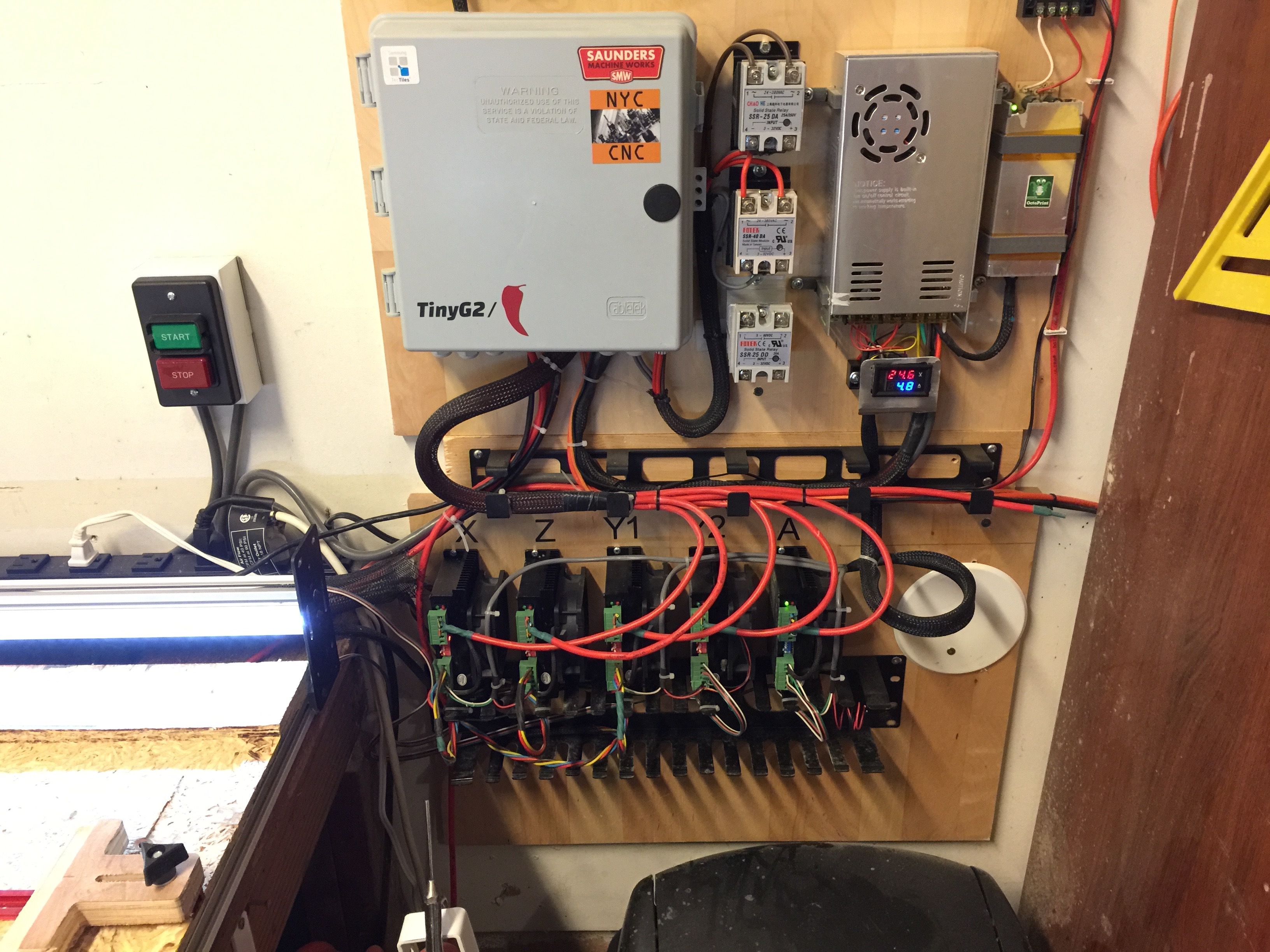 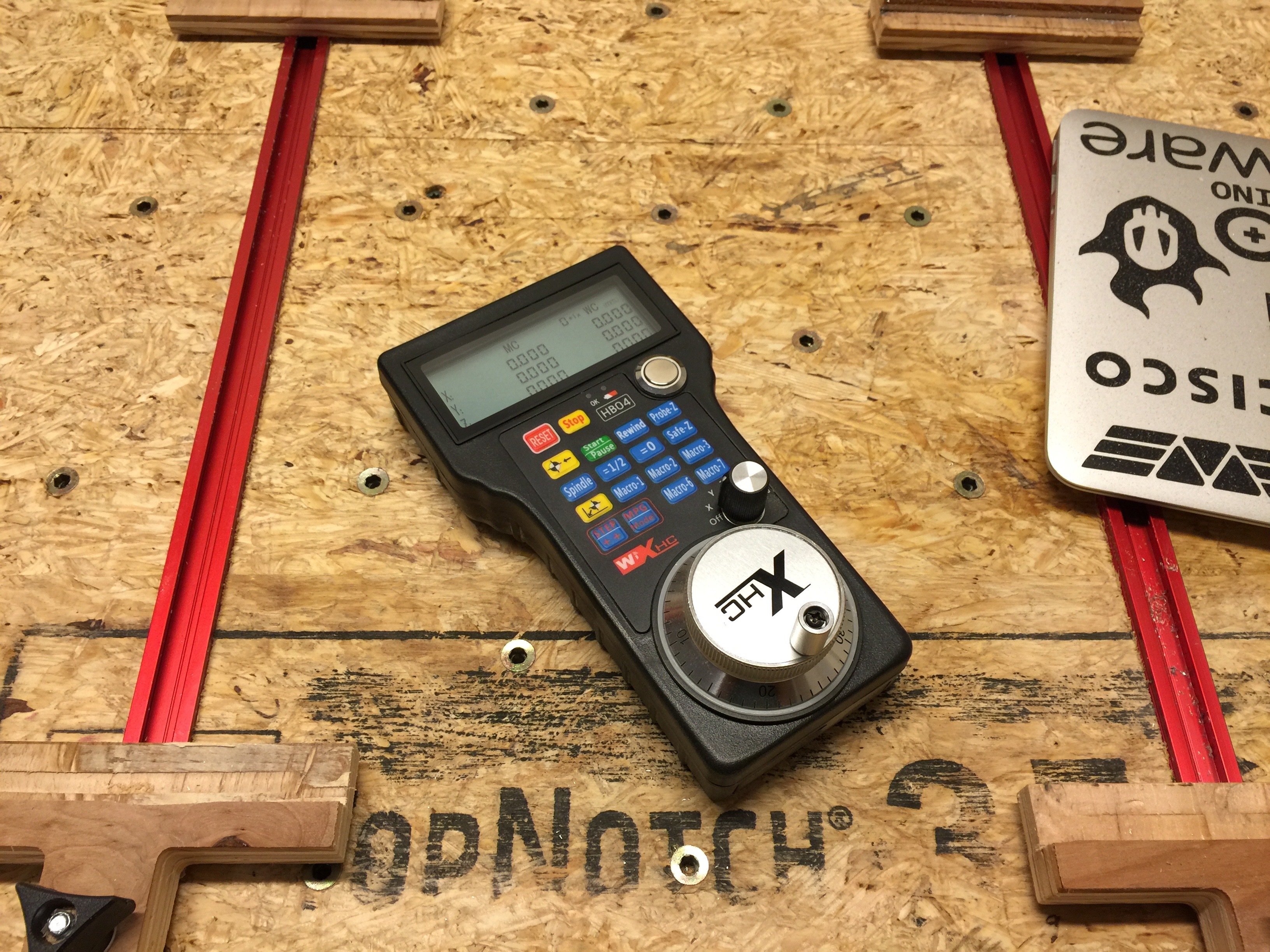 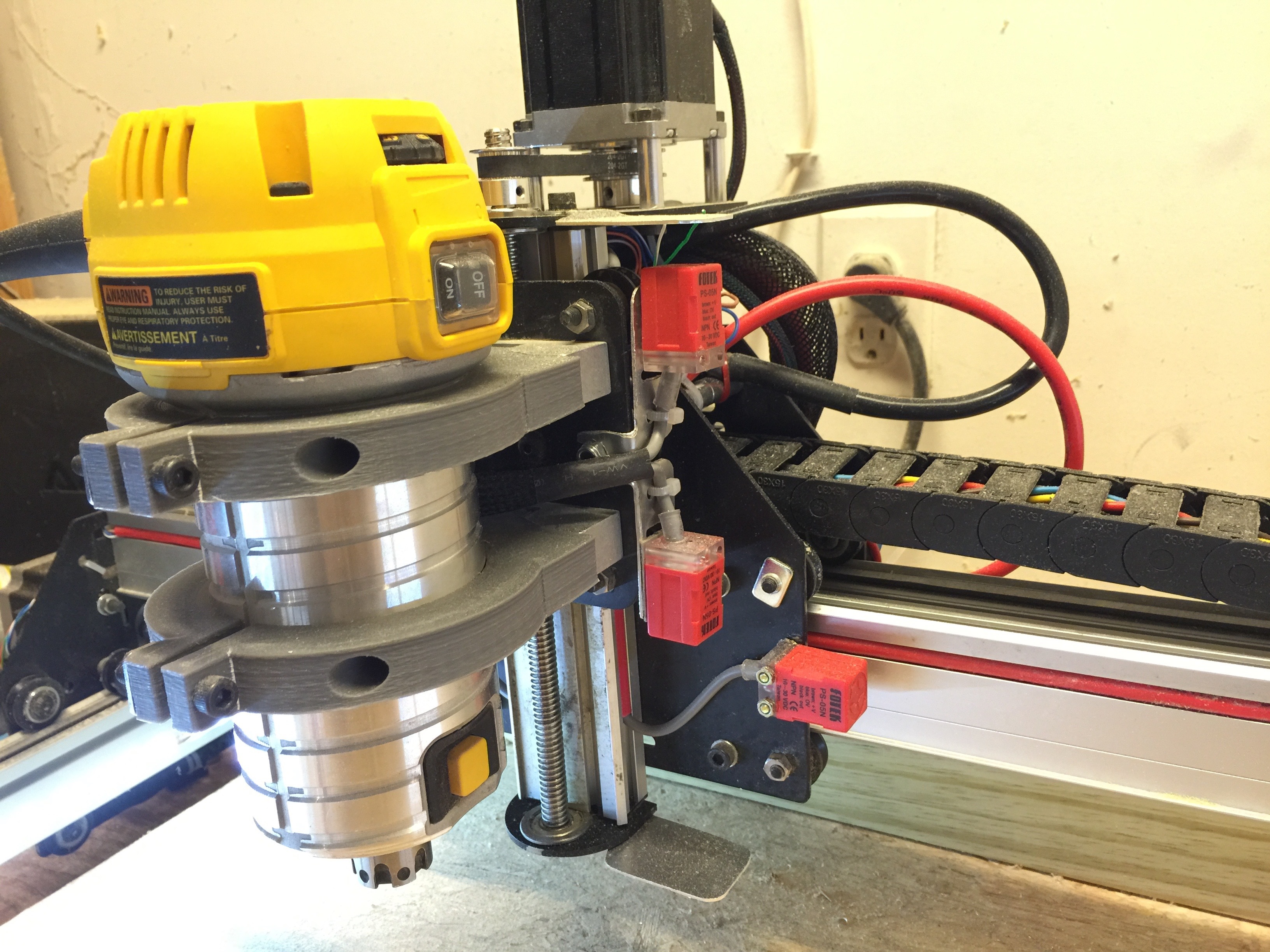 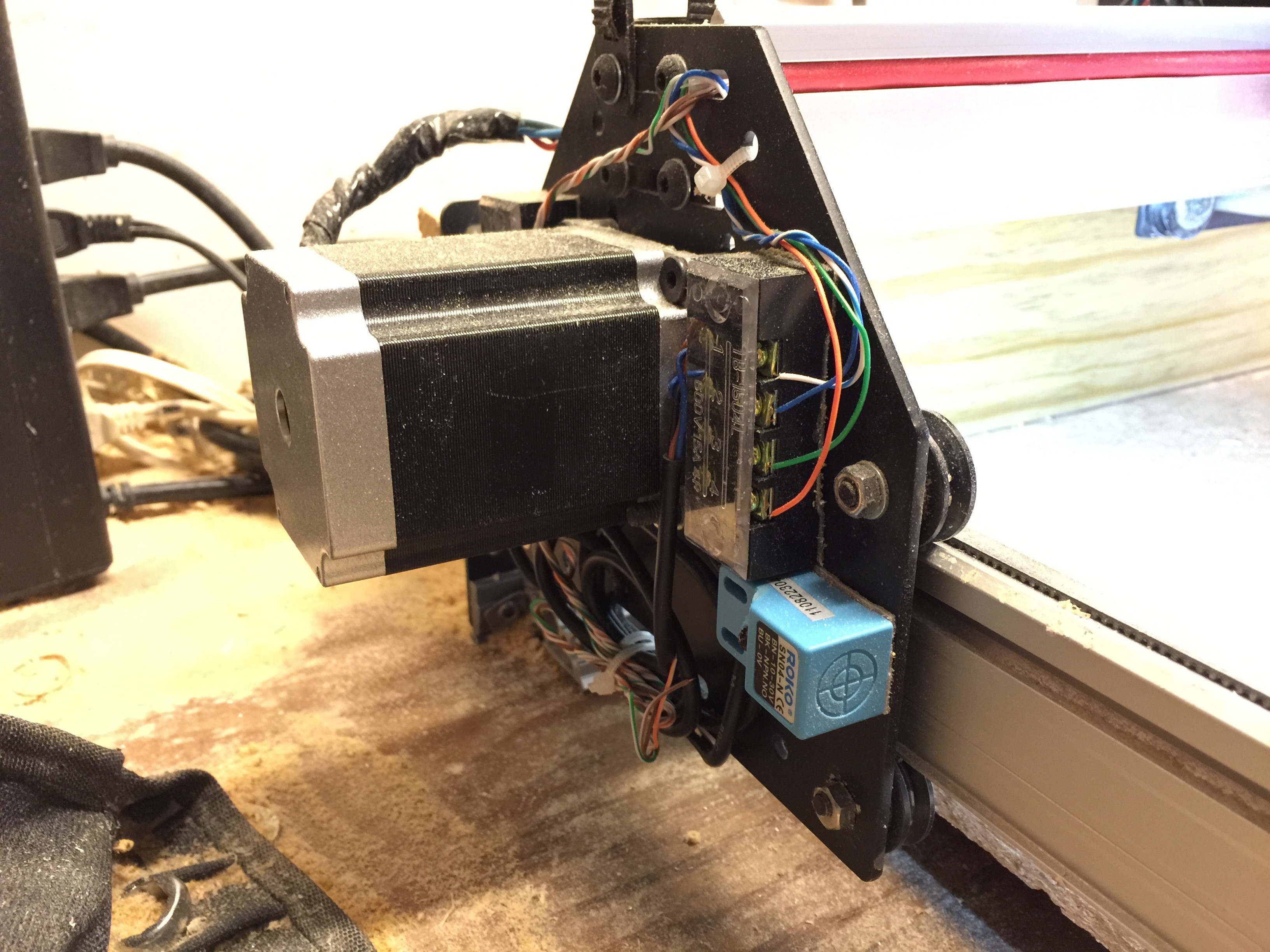 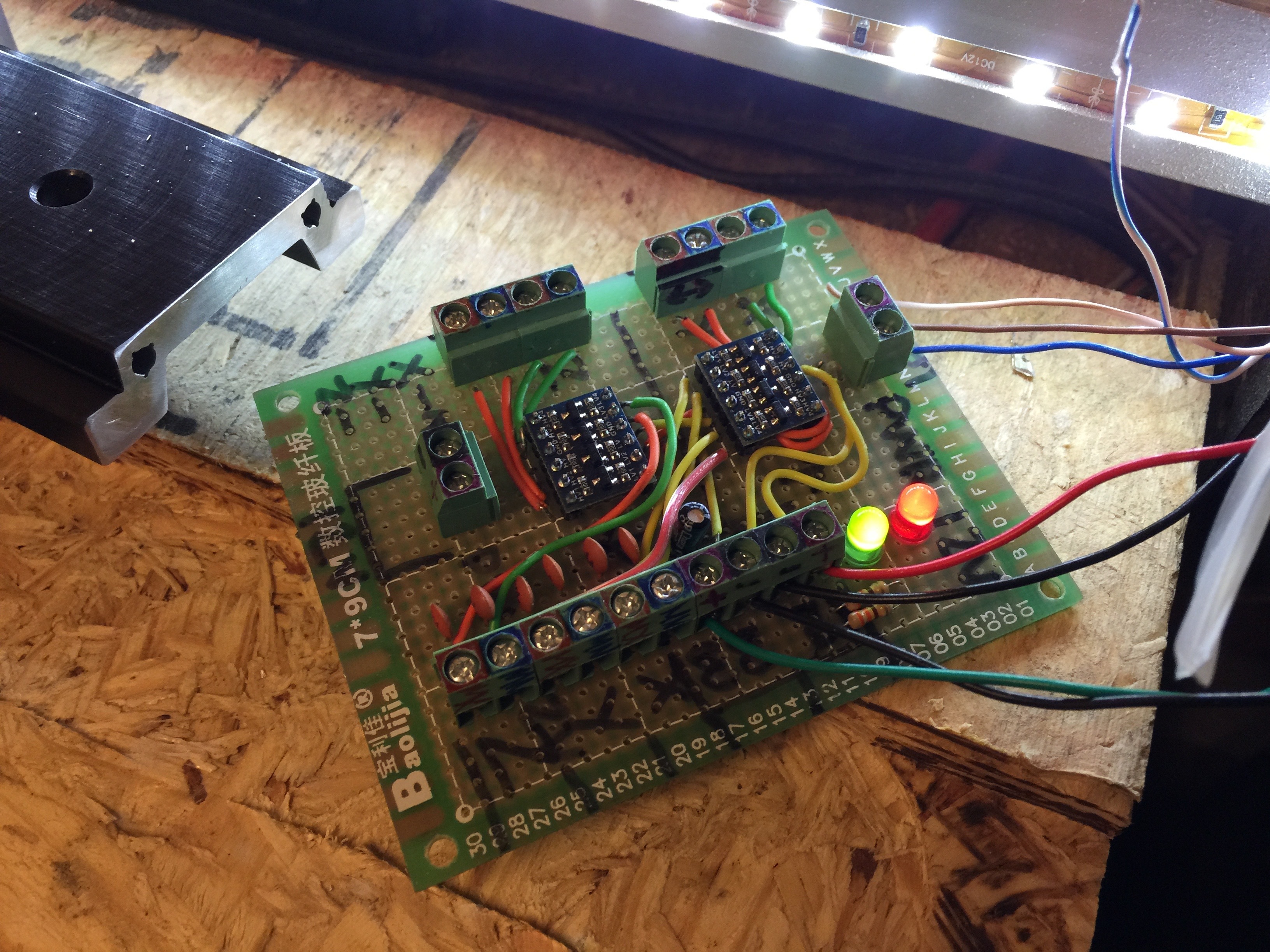 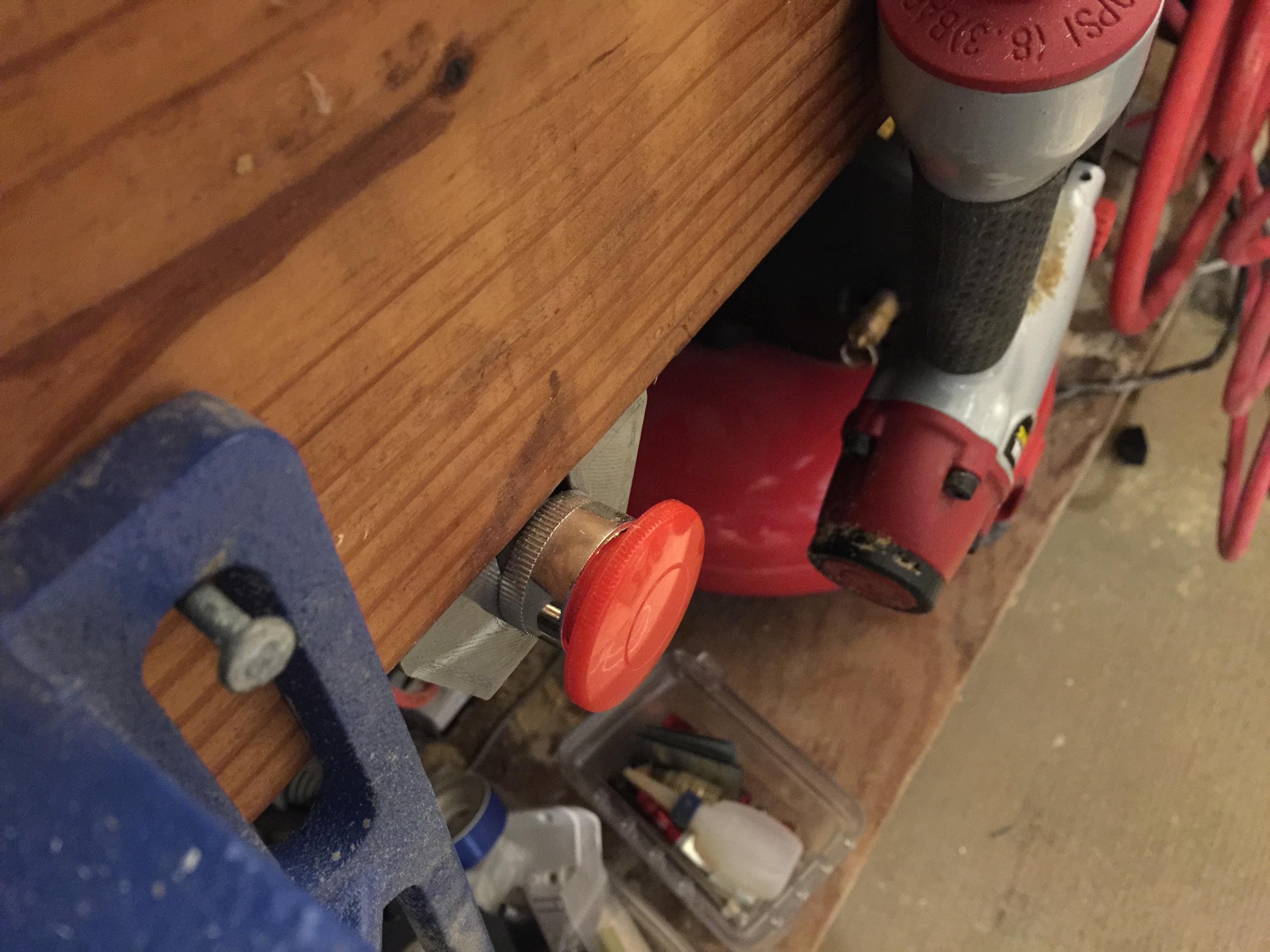 The Controller is a Arduino Due running a modified ver. of TinyG2 with a custom breakout shield so I can use external drivers. (ST-5045). The Steppers are NEMA 23’s (except the rotary axis which is a NEMA 17 (for now) rated @ 400oz-in. Induction endstops all the way around (MIN MAX). Acme screw upgrade for Z. The steppers drivers are ran from a 24V 15A PSU. The 12V PSU is for the Due, RPi B+ & LEDs. The SSRs are for the spindle, Vac and coolant. The Pendant is a XHC HB04. The Spindle is a DWP 611. The collet is from precision bits.

It works pretty well. Still trying figure out how to use my Z-Probe which work with GBRL on TinyG2.

How is your experience with jobs going across the joint? Do you experience any (at all!) disturbance in the cut?

Cuts clean. Had to file the joint a tad bit to flush. I’m thinking of what to do with the other two leftover 500mm slides that were the y axis. A camera slide maybe.

Looks amazing! Makes me really want to organize my work space better! This may seem like an odd question but, where did you get the gray enclosure for your electronics from? Does it have a specific name or use? I’ve been looking for basically that exact enclosure but try and search for “plastic electronics enclosure with door” and see what you get!

plastic electronics enclosure with door" and see what you get!

Rusty, I tried the search you suggested, WOW!
Then I tried amazon, here’s what I came up with.
http://www.amazon.com/s/ref=nb_sb_noss_1?url=search-alias%3Daps&field-keywords=electronics+enclosure

Enclosure is old external hard drive enclosure. I use a lot of old electronics. My local dump lets me grab a few things from electronic recycling.

Thanks milord. I will post a report of how the makerslide gantry works soon. 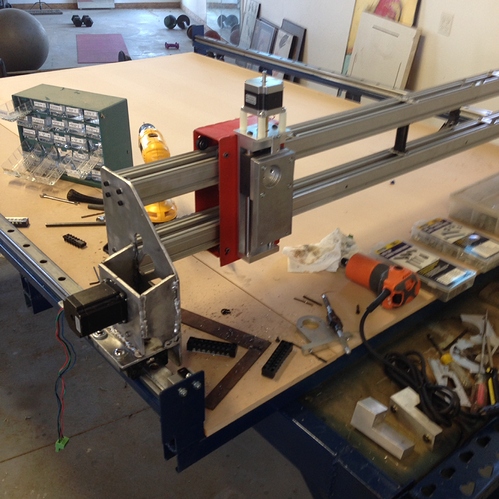 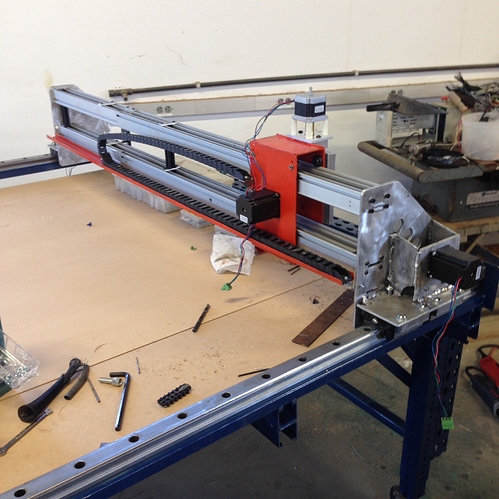 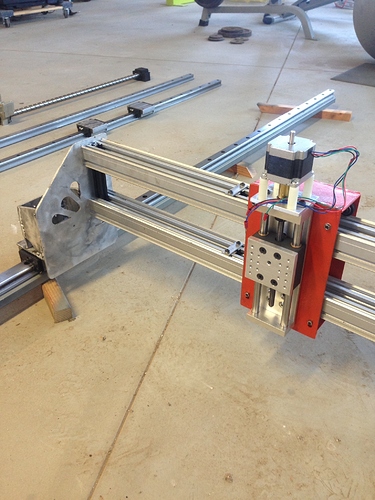 how did you prevent sag along the x axis?

hi how did you prevent sag along the x axis?

At first I used the 1"X1" aluminum sandwiched between the 4 slides. No sag at all. But twisting is a problem in the middle. So I made a steel filler block to go in middle. But there is still noticeable twisting of gantry in middle. 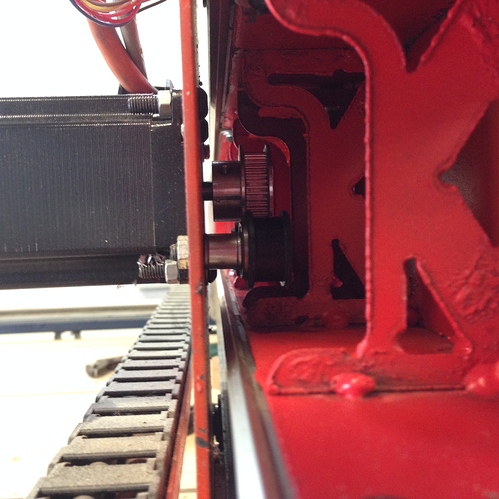 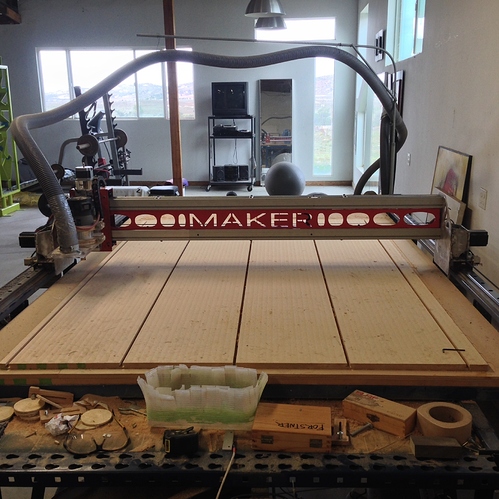 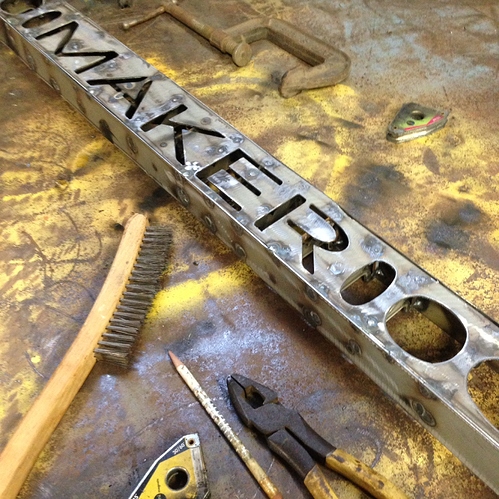 So I think I’ll have to deal with the twisting in the y direction when router gets in middle of gantry. Is what it is I guess.
My next mod is changing y axis Belts from 6mm to 15mm. Pretty cheap on eBay from China. The 6mm works good on x axis but there’s to much flex on the long y axis.

Ok, so I’m going to go ahead and ask, not because I want to upgrade my machine beyond 1000mm (yet), but I’ve been bothered by the belts and their inconsistencies.

Other than spending more $$, what am I risking in terms of performance if I decided to change out my X axis drive method from the belt, to a C-beam Linear Actuator kit from OpenBuilds?

I’m already planning to replace the Z slide with C beam and use a lock collar to direct-drive the acme with the Nema versus the belt and pulley design for Z.

It’s still only 1 X axis motor, but instead of the belt I’ll have a 1000mm 8mm acme lead-screw and anti-backlash nut.

Guessing I need to change steps per mm in the GRBL configuration, but hoping I’m going to improve X travel reliability. I’ve heard screw-whip is something to be concerned about if moving quickly, but I don’t usually fly the X across the workpiece…

So my xcarve/shapeoko is no more. I found a guy on Craigslist who gave me great HSK linear guides for cheap. Thus rack & pinion is the outcome.
The thing is with shapeoko is the belts flex way to much for the forces needed to route thru wood/etc. Belts are great for things with no lateral forces like laser.
If you want to cut wood/acrylic/aluminum then a stiffer such as ball screw or rack&opinion.

Well your max feed rate for the X axis will be lower. (XC default is 8000 mm/min)
SMW3D’s R7 (an all C-Beam CNC kit) has a Max travel speed 6000mm/min with a suggested Feed of 1500mm/min.
Which is actual pretty high when you consider this is a direct screw drive.

I don’t know about screw whip, but the C-Beam kits have the screw secured at both ends, presumably to minimize this.

Hi,
Nice expansion of your kit !

Very interresting
I would like to do the same but i could really use some tips.
Could i send you some questions through email ?
Mine is: loko.sjonny@gmail.com

Thanks in advance,
John