You can put some shim around it. Some people 3D printing as adapter. Or you can check this post. John is selling Makita holder and very professional item. He might ship it to you.

Thnx. So all the 65mm spindles need some padding/shim to fit in the DeWalt bracket. Good to know.
Is the Makita a good choice for a spindle?

I think so. As an router of course. I am Dewalt user. Always fascinated for Makita. It is great choice. Other than that, if you want to go with Spindle options, that is different. But don’t confuse yourself. Makita is perfect for anything, also quieter than Dewalt, better speed control.

What about just use a plastic/pvc tube/pipe 60-65mm inner size. Split it and snap it around the Macita as a shim. That should work with the Dewalt bracket.
The special Makita alu bracket looked wery nice

I think @AlanDavis said it, the Makita is a very good choice and may I dare say better than the Dewalt

. I went with it (not received yet) mainly because it was a lower price point for me here in Canada, and then found out after I ordered it it’s a very good option. I think there is a discussion on the Shapeoko forum about it comparing it directly to the Dewalt, might be worth checking out!

Besides all known goodness, Makita have Bearing module which is so easier to change, Brush life is longer and cheaper and easier to change, vibration ratio is very close to that expensive spindles, I’m not even talking about power.

I think Makita is the spindle/router of choice now. Lower price. I can buy it here in Norway. No shipping and import tax/vat.
I can go more advanced later with VFD and another spindle when I have played around for some time

In my opinion, you never need to spend high bucks. Unless if you cut aluminum or dens acrylic, you need slow speed to have better cut. I know many people using Dewalt or Makita with success.

I can tell you from personal experience that the Makita router with the 3d printed spacers from this thread works great!
You are going to need some new colletts for it to enable use of bits with different shank sizes. Check out these:
http://www.elairecorp.com/makitaroutercollets.html

Still waiting for mine… Took Elaire 11 days to get my stuff in the mail. Should arrive the coming week

The input uses an optocoupler, so worst case you fry $18

Nice to see that teardown. If I have to do another IoT type of build then it will make it back on my list of considerations. That being said, I have a few Solid State Relays now that do the trick and I did “go that route”.

Mounted under the table that the X-Carve is on next to the X-Contorller… works a treat. 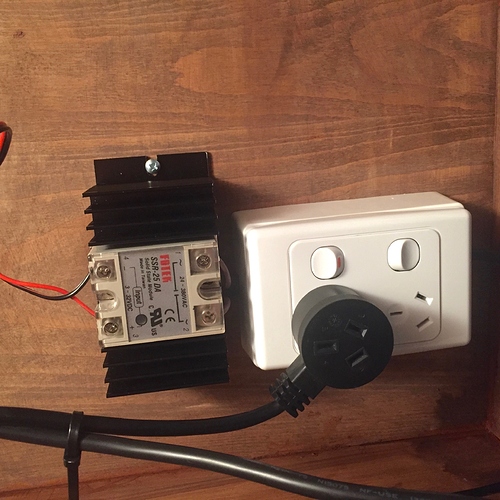 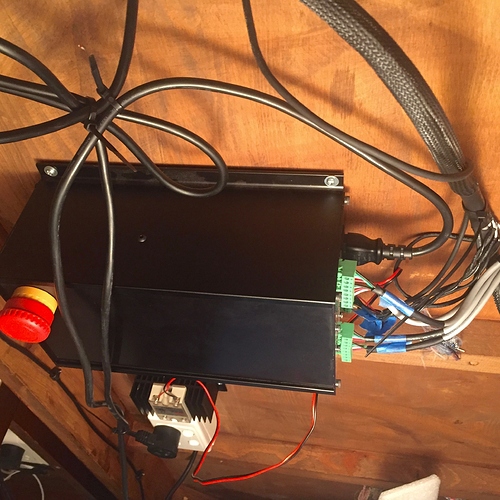 This is probably the most straight forward and less costly way to go. Have you tried it with anything more than a spindle (e.g. spindle and shop vac)? I wonder how this would handle (and how hot it would get) @10A for a few hours non-stop.

PS. do you hit the e-stop with your knee?

Had to move storage to take the picture. Having everything mounted under the table means that the only thing you can see when standing around it is the e-stop button.