95% of the VD spindles run on 3 phase 220V. There are a FEW that run on 110V TO the spindle… Someone on here has one and it was the first time I ever saw one. In simple terms the 11V VFD converts the 110V to 220V 3 phase output. A 220V VFD does the same but starts with the 220V single phase. I am not an EE so I can not go into the deep how and why of converting 110V to 220 3 phase in a VFD. Bart Ding went into detail about it on one of the treads, but overall the 110V VFDs will drive the .8KW spindle just fine for everything the X Carve can handle. http://www.automationtechnologiesinc.com/ is run by one great guy and he really goes out of his way to make sure you have everything you need if you will email or call him up. They ship really fast and package everything very well. If you are based the the USA then I would HIGHLY suggest considering their products for upgrade and the like.

I have recently got one of these here in the UK… I’m seriously struggling with it, although I have had it running and cutting on my X-Carve, it was producing lots and lots of interference, it affected my stepper motor operation, my mains tester said the motor casing and X-Carve chassis is live, which really freaked me out, eventually I had to pluck up the courage to touch it and see just how live it was, and it wasn’t, then to top the lot it began to hinder my wifi connection, so temporary fix I dropped my Makita router in and wow I should have just used that from word go, My X-Carve has really manned up, Wow its brilliant, reluctant to go back to VFD & spindle… Unless someone can help me out I think I’ll be selling it and sticking with the makita…
Appreciate anyone’s thoughts…

Did you order it off of EBay? It sounds like you got a bum unit there for sure. EMI is not uncommon on these units if they are bad. Did you use shielded cables and are your cable shields grounded on the controller side only as they should be? Also how did you run the power cable to the Spindle fro the VFD? Does it run next to the motor cables? if you do this and are not using a shielded and grounded spindle power cable and your stepper cables are not also shielded and have their shielded grounded on the controller side, then you will see EMI issues.

Thanks for your detailed response, I appreciate your thoughts…
Yes I did buy the unit from eBay, It was meant to be from a seller in Portsmouth but the unit came from Germany, poss drop shipped, although a very quick 48 Hour service.
Yes I did use shielded cable on from VFD to spindle, its grounded at the VFD via the shielding and at the motor end the shielding is clamped to the motor plug.
My stepper motors are also using the shielded cable that they are supplied with from Inventables.
The shielded power cable to the motor runs up and across the ceiling of my workshop dropping down to the spindle, where as my stepper motor cables run from a shelf below the CNC and up to steppers, so plenty of distance between cables…
Cheers

I am buying a VFD spindle from automationtechnologiesinc.com (this one specifically: http://www.automationtechnologiesinc.com/products-page/cnc-spindle/800w-air-cooled-cnc-milling-spindle-kl-800a). It says its 65mm OD, as I’ve seen that’s what’s recommended, but its not clear if my existing mount will work, or if I need the new dewalt 611 mount. I have the 24v spindle that came with whole kit that I got about 5 months ago - before they discontinued that spindle and started recommending the dewalt 611.

Will that original spindle mount work with the 65mm VFD?

There are a few options here. You can use the Inventables 611 mount with a shim of styrene or a shim of aluminum. This is what Inventables did with their 800w air cooled spindle and it is what I have done with my Makita (also 65mm).
https://www.inventables.com/technologies/x-carve-dewalt-611-spindle-mount

You could also go with this spindle mount found here if you want to make it yourself:

Or if you want to order one @JohnScherer is making and selling them here:

Hope that helps some.

Like @sketch42 mentioned, I did the shimming technique with the dewalt 611 mount. It took 2 layers of the styrene we sell in the store https://www.inventables.com/technologies/styrene-sheet fits like a champ.

You can also 3D print mounts (I think @Travelphotog did this for his x-carve). I wouldn’t cut them yourself out of aluminum (if you were leaning towards that option). Unfortunately lots of things can go wrong when cutting thick aluminum like that on the stock machine and you can end up with a mount that isn’t square. I know from experience

I have been running a 3D printed mount for my 65mm .8KW VFD since i got it and only repalced it once, to address a few issues i found in my first mount. Currently it is printed in PLA at 30% infill with 4 perimeters and 4 top and bottom layers, I only mill aluminum, granite and carbon fiber with my XC these days and I have had 0 issues. Keep in mind though that my mount was printed with a Rostock Max V2 delta printer with a fair amount of mods so it is above the “normal” level of printing found on most consumer 3D printers.

Are you willing to share your .stl files for the VFD mount?

Here’s a link to the vfd in question:

I recommend going with the Huanyang VFD because of how much documentation there is already.
This is the one I ordered at $130 including shipping. It took about 2 weeks to arrive. It has the same input/output voltages as what you’ve mentioned.

Thanks for the advice. What kind of wire did you use between the VFD and spindle?

I went overboard and bought some heavy duty industrial cable from igus.com that’s 4 conductor 16 gauge wire with an overall shield. I learned a few things too. Though the spindle has a 4 pin connector, the extra pin is not connected to anything let alone ground, making only 3 wires necessary. I’m not sure what the minimum wire size is, but 16 gauge seems more than enough for a 1.5kW spindle.

The 17 gauge, 3 conductor cable of the same model (CF10-10-03) should suffice while being 2/3 the cost. Other cables such as the CF6 and CF140UL cables on their site are even more affordable, but the high flexibility in addition to the overall shield was what sold me on their CF10 product line. (Really I just wanted to see what a top-of-the-line cable was like.)

I have an 800W spindle and a Huanyang VFD and like all of the Chinese spindles/VFDs, it had a 4 pin plug but only a 3 conductor cable. I fitted an earth connection inside the spindle but trying to get a 4 conductor cable into the existing connector was impossible so ended up replacing the connector with an Amphenol 4 pin plug/socket combination.
The earth connection really is needed for both safety and noise (electrical) reduction.

I opened mine up after using a volt meter and finding that the ground was not connected. Being water cooled I figured it would be best to make sure it was properly grounded. Just need to make sure you get the little rubber seals back in place correctly and add some sealant around them to prevent any leaks.

Yes, getting a cable that fits the plug that came with the Chinese air-cooled spindle was a requirement. The igus cables I mentioned are all around 7.5-9mm which fits the plug. I tried to open my spindle as well to ground the spindle body, but stopped when I started stripping the screws before they would loosen.

Thanks for the info gents. I’ve been trying to source some shielded cable the last couple days, but run into the problem of either they sell in 500ft increments, or it is sold by the foot but the shipping charges are ridiculous. One website has the cable I wanted for around $25 for 30ft of 16/4 shielded cable, but then wanted to charge $32 for shipping. I’ll take a look at the website you suggested!

I was finally able to save up enough money for a VFD and air cooled spindle, and did some quick cuts last night. It’s a vast improvement over my craftsman router. I bought the 2.2kw VFD from www.automationtechnologiesinc.com (same price as the 1.5kw VFD), and the 0.8kw air cooled spindle I bought off Ebay for $135. I also bought the dewalt 611 mount from Inventables…and with the 65mm diameter spindle, I had to cut up 10 beer cans to make enough shim to barely fill the gap. 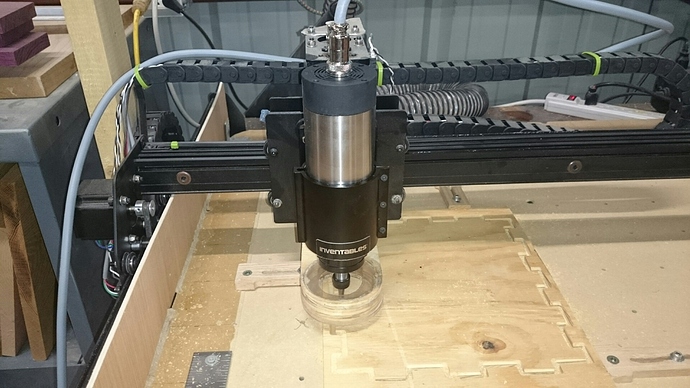 It’s ER11, which works for me since I already have collets that match up with it.