I’ve modified my X-Carve to make use of an inexpensive swivel knife to cut stencils that I plan to use to paint sweatshirts. I’m using this knife from Amazon for $8 (http://www.amazon.com/gp/product/B0006O5JF6?psc=1&redirect=true&ref_=oh_aui_detailpage_o03_s00). The handle fits inside the 24V ER11 spindle using a crudely designed, 3D-printed collet/ferrule to replace the existing spring collet. The handle has to be cut/shortened to easily fit in the spindle. Once the nut is tightened the knife is firmly held in place. This self-healing cutting mat from Amazon for $12 (http://www.amazon.com/gp/product/B0027RS8DU?psc=1&redirect=true&ref_=oh_aui_detailpage_o04_s00) is taped to the X-Carve’s waste board for ease of cutting (see photo below to get an idea of how it looks). I’ve been using TrueType fonts meant for stencils that are easy to find on the web for free. I set up my text in Microsoft Word and then copy/paste what I want to a graphics program. From there, I save it as a .JPG file and use the Image Vectorizer in Easel to bring the image into my project. From there I set the X-Carve for an outline cut, set the depth, zero and go. So far I’ve only cut thin paper and cardstock. As soon as I get some vinyl I’ll give that a go. Repositional adhesive spray works great to keep what I’m cutting securely attached to the self-healing cutting mat. This is working nicely, but I’m always interested to hear ideas from others for improvements. 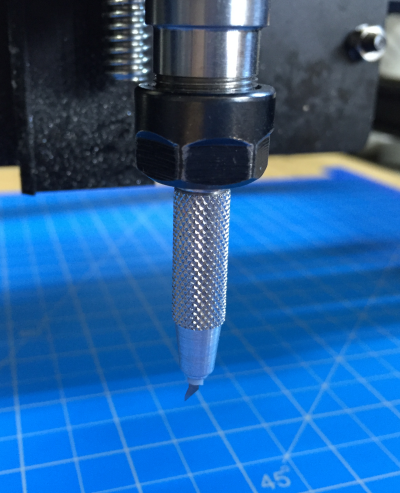 Nice work and thanks for the links to the items on Amazon. I’ve been looking at printing this air diffusor with a drag knife extension to give vinyl cutting a try. I didn’t think to look for a knife that I could fit in my existing collet.

I’ve also looked at that air diffusor and almost went that route. I’m going to upgrade to the Dewalt 611 spindle soon that seems to require some significant air handling around the cutting area. Glad you liked my X-Carve modification.

I’d be very interested to see how it compares to my Silhouette Cameo. I think I’m one of the only dudes with one. Everything is SO crafty. Like you, I’m making vinyl decals for my Jeep and waxed paper stencils for printing custom tees. Please post a pic of one of your sweatshirts. You can check out one of my projects here:

I was able to cut a ridiculously small/detailed Gears of War skull decals with a new blade, which are about the same price as your swivel knife. Interesting…

I like the Blue Cutting Matt Underneath. Where did you get it

That’s the self-healing mat I mentioned in the OP. Here’s the link: http://www.amazon.com/gp/product/B0027RS8DU?psc=1&redirect=true&ref_=oh_aui_detailpage_o04_s00

That’s quite a video of you making the R2D2 onesie with Star Wars theme music and sound effects! It was really well-done! I have 4, soon to be 5, grandchildren and I hadn’t thought of making stencils for them until now. Thanks for the inspiration!

I’d be very interested to see how it compares to my Silhouette Cameo. I think I’m one of the only dudes with one.

Not quite! I own two older Cricut machines that allow me to use third party software to cut anything I want up to 12 x 24 inches instead of using their proprietary hardware/software. Able to use any standard SVG file.

@DavidBurger I’ve made at least 20 shirts for our family, including anchor shirts for everyone for my son’s first birthday party that was pirate-themed. Also, decorative pillowcases. Cutting “freezer paper” is the key. It’s waxed on one side so you can iron it in place. I’ve also used that adhesive shelf lining stuff as resist for acid etching glassware.

This is an update to my original post (sorry, it’s long). I’ve concluded that the knife I was using just wasn’t strong or precise enough for my needs. I decided to see if OEM knives for existing diecutting machines (e.g. Silhouette Cameo and Cricut) could be easily attached to my spindle. So far, I’ve had success with the Cricut knife (http://www.amazon.com/Silhouette-SILH-BLADE-3-3T-Replacement-Blade/dp/B005S2O61E/ref=sr_1_1_m?s=arts-crafts&ie=UTF8&qid=1450808237&sr=1-1&keywords=silhouette+cameo+blade). I printed out a little shaft using PLA that compression-fit into the blade housing with an extension that would go into my 1/4" collet. 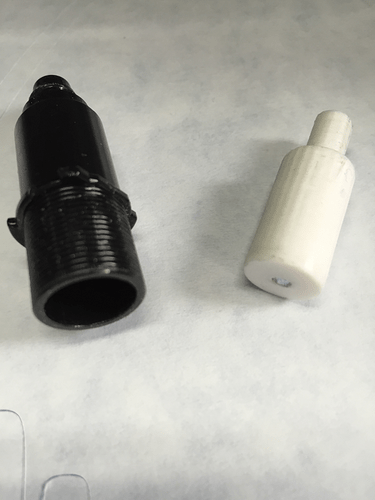 Pasted image600×800 442 KB
I designed the shaft so I could thread a narrow bolt through it for extra strength. After threading the bolt all the way through I cut off the head end. Once assembled it all fit in the spindle nicely. 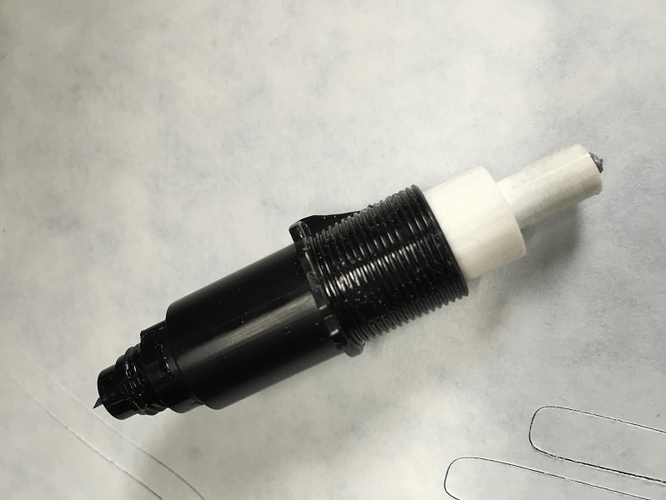 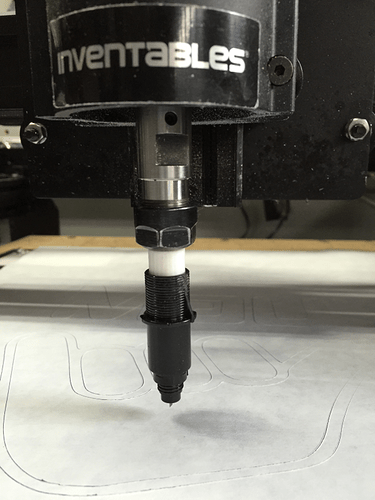 Pasted image600×800 566 KB
The Silhouette Cameo blade cut more precisely than the blade I had been using. I have been cutting in increments so the blade goes over the same line 3-4 times, going a little deeper each time. The blade follows previous lines almost perfectly.
Here’s a picture of the finished cut. Even though I milled out a piece of PVC (that sits on top of the X-Carves waste board and underneath the self-healing cutting mat) so the entire surface would be a parallel plane to the plane of the spindle it appears I still have a low spot (see upper right corner in the photo). Still, the design was cut all the way through in the freezer paper. 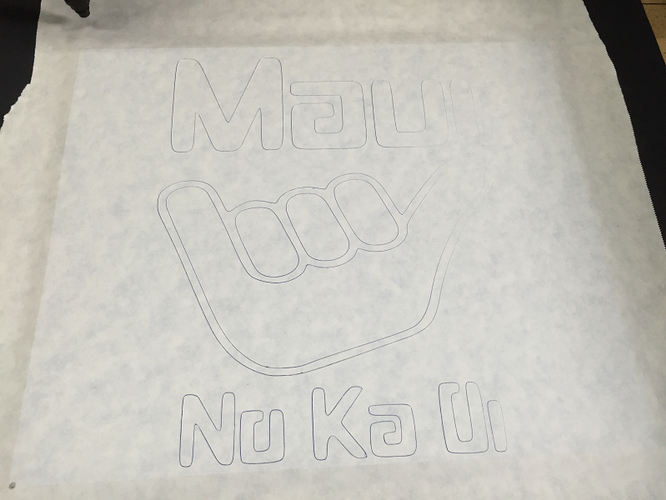 Pasted image800×600 500 KB
Here’s what the stencil looks like once I’ve removed the cut areas: 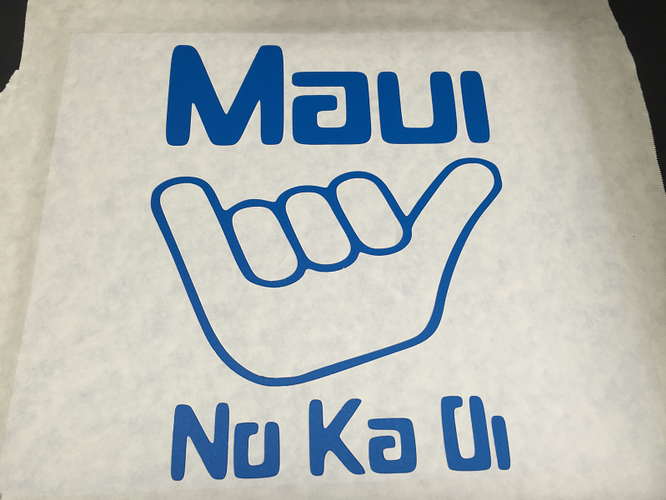 Pasted image800×600 510 KB
It seems critical to have the spindle plane and the cutting surface plane be absolutely parallel to one another. I thought I’d taken care of that with my PVC milling work, but I guess not. The Cricut knife (http://www.amazon.com/Cricut-Explore-Deep-Blade-Housing/dp/B00I00RASM/ref=sr_1_fkmr1_2?s=arts-crafts&ie=UTF8&qid=1450809223&sr=1-2-fkmr1&keywords=cricut+knife+housing) is spring-loaded in its housing which, I think, will help alleviate this problem. However, if you look closely at the shape of the housing it’s more complex than the Cameo’s and will take some serious Sketchup work to design a holder. I’m pretty much a beginner with Sketchup so if anyone has any tips I’d appreciate any guidance.
3 Likes
AntonioSantiago December 22, 2015, 9:22pm #11

Thats a great idea with the cameo blade. I got both, the circuit explore and the cameo. Im gonna try your approach in the xcarve. When you cut with the blade, do you use Easel?

Yes, I’ve been using Easel to do all the designing and cutting. I just finished designing a holder for the Cricut blade and housing. I like it since it’s spring-loaded which I hope will solve the leveling issue. I’m going to print out the holder in the morning, attach it to the X-Carve and see what happens.

I hope it works for you. And the good thing about the cricut ones is that you can go deeper and you can find them really cheap too. I have a plotter for my decals and the blades are the same that the cricut uses. Im looking forward to your new modification, good luck!

The simple Cricut knife adapter I made for my X-Carve worked nicely. In the picture below you’ll see the gold/brown adapter that’s simply a cylinder with an expansion slot. The inner diameter at the top and bottom ends are set to fit the spindle and knife housing, respectively. It’s a tight fit and it holds the knife housing secure enough to make the cuts. I used a Dremel on the cap of the housing since it was just slightly wider than the rest of the housing. This assembly works much better than my original knife idea. The spring-loaded knife is a benefit. The only letter that caused a problem was the ‘w’. The sharp turns are a challenge for this approach. I cut at 500 mm/min to a depth of 0.6mm with 0.2mm increments. That meant the knife went over each outline 3 times. I think that’s overkill and will, in the future, set it to only cut each outline twice. When the knife only cuts an outline once there’s often a small gap between where the knife started and where it ended. The double-cutting eliminates that. The stencil was cut in freezer paper held down to the cutting mat with a very light application of Krylon’s Easy Tack. 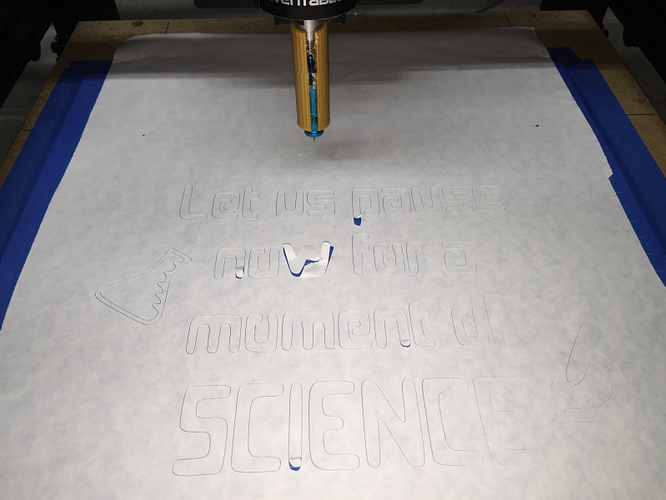 Well, I’d not heard of Monokote before you asked your question so I looked around the web and YouTube to see what I could learn. I see people using a Camel and Cricut to cut the material so I would think my X-Carve modification should work. I’m using a Cricut blade which works in the Cricut machine to cut Monokote. It appears that it requires a relatively slow cutting speed and only moderate pressure to make the cut. Assuming the Easy Tack doesn’t ruin the adhesive side of the Monokote I would give it a go.

The Cricut blade/holder is definitely the way to go. I printed out a bracket to hold the blade housing.

Pasted image800×600 576 KB
I also tried cutting on the cutting mat that goes with the Cricut. Surprisingly, that mat didn’t work as well as the generic mat I had been using. After a few more trial cuts I finally decided that having the cutting plane parallel to the waste board is important so I printed out a bracket to hold a AccuRemote digital depth gauge. 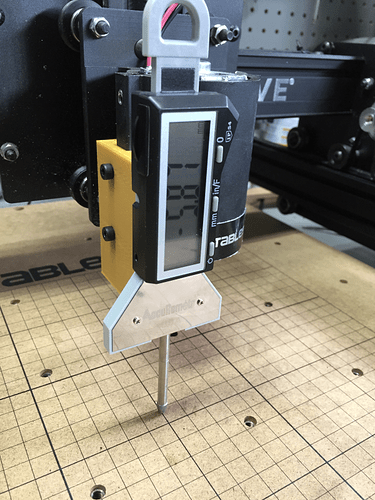 Pasted image600×800 721 KB
I used the gauge to determine the slope of X-Carve’s waste board surface and place spacers underneath to make it more parallel. It’s not perfect, but now there’s no more than 0.2mm between the highest and lowest points.
The top photo shows the end result of a cut using freezer paper. I cut to 0.3mm with 0.2mm increments so the blade went over all cuts twice. The cuts are much more uniform over the entire surface after the leveling exercise. A few of the letters are raised, but there were no tears as in previous attempts.
1 Like
DavidBurger December 28, 2015, 7:05am #20

Very interesting! I just ordered one so I’ll work on seeing about adapting it to the X-Carve. 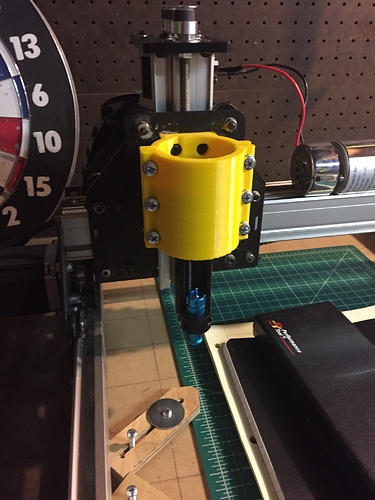 I’ve figured out a mounting solution for my Cricut, but I’m still working on software. Donek wasn’t able to handle a path from Inkscape. Said it was too long, overloaded the buffer. Has anyone had luck with software that will do the corner corrections?

I was able to download the Donek Tools post-processors and Excel spreadsheet to make the corner corrections, but the resulting gcode file is not compatible with Easel. They included G02 and G03 commands with I and J parameters to draw the arcs to move the knife around corners. Maybe another gcode sender would work???

No, but I will. Thanks for the tip.