I can’t take full credit for this, as Winston Moy gave me the idea.

I have had my Makita router for over a year now, waiting for someone to make a mount that I liked, and didn’t have to make myself (I don’t trust my self to make it perfect).

I was watching Winston Moy’s youtube channel and discussing how the Shapeoko 3 requires a collar to adapt the DW611 mount to fit the Makita. This prompted some simple math: a = b, b = c; therefore, a = c.

I purchased the Inventables X-Carve DW611 mount and two of the Shapeoko 3 adapter collars.

The attached pictures show the result, a super sturdy and store bought setup that is superior in rigidity to 90% of the mounts I have seen, and in some cases, even less expensive. I have left feedback for the Inventables purchasing dept. to also carry these collars, so look out for those too!

Thank you for reading, I hope this helps someone with the same concerns and issues as myself! 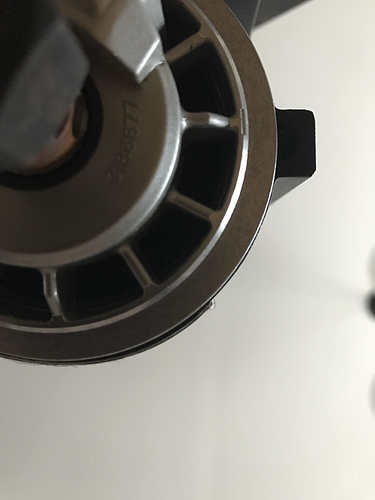 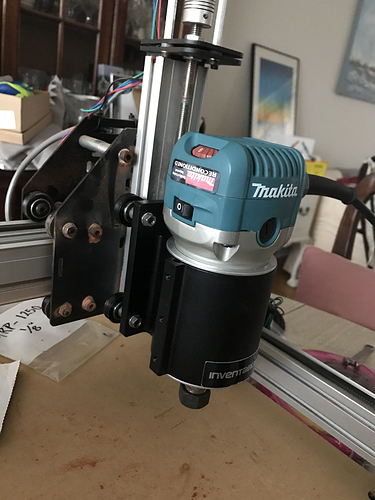 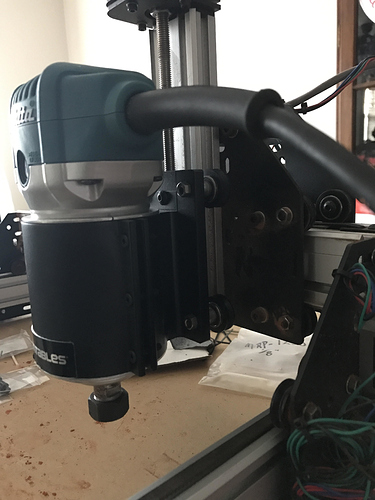 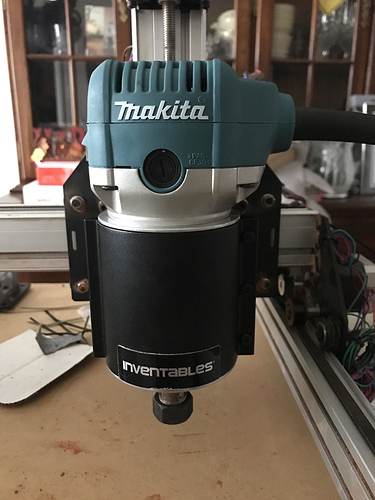 I was just looking at these today. It’s too bad shipping to Canada is fairly expensive.

I would urge you to take a look at the various reviews around the internet. This one is done by Winston Moy, his videos are very well thought out and thorough.

Two adapters for the mount because you need one for top and for bottom?

While my Dewalt is working just fine right now as it has very little run time, once/if it goes, I’m thinking the switch may be worth it. Hard to beat $89 for the router itself and to get down to 10k RPM would be nice too.

I do have the elaire collet adapter. But it is worth noting that the kit for the mount that Inventables sells does include a 1/4" to 1/8" collet adapter, and after test fitting I was curious, and it seems to work fine.

I have the elaire 1/8" collet, but I was just mentioning for anyone else that the adapter does seem to fit well enough.

How are the brushes? Last more than 100 hours?

Mine have. Because they have brush ports, you can pop them open and check them before starting a job. So far have lasted significantly longer than the Dewalt did. (I should probably check them again soon though)

I have bought one of these and can vouch to it’s quality and fit. Mine cost 31.00 and change to have it shipped to Wisconsin. It also arrived less than two week after order. I only bought one mount as It is wide enough to do the job as is. It certainly beats beer can shims.

I should have said that was with postage.

I have the Makita and as a new (aka - inexperienced) X-Carve owner have been pleased for the most part. My only real negative point has to do with using the Dewalt 611 mount. Adapting the the mount itself is no problem. As per another member suggested, the easiest way to compensate for the undersized router is to use a length of 3" plastic sewer/drain pipe as a shim. A 10’ piece is about $8. The pipe itself is too large but just make two cuts down the side and remove a strip allowing the remaining piece to slip inside the dewalt mount. You may have to spread the mount open a little to get the router in but the included screws still tighten everything up just fine.

To me the downside is the body of the Makita doesn’t appear to be as long as the Dewalt. (see photos below) For normal operation this is not a problem. But I fabricated a dust boot similar to Phil Johnson’s that does not ride up and down on the Z axis.The shorter body tends to limit the amount of up adjustment of the shoe as the mount itself will strike the rear section of the shoe if you try to set it too high. With Phil’s set up the body of the 611 can actually pass through the shoe and reach deeper. This also allows his brush to be longer as the shoe can be set higher.

I have considered removing the Dewalt mount and cutting it down about and inch but it is such a nice piece of work I haven’t been able to bring myself to do it. Also am considering ordering a new spindle mounting plate form Inventables and making my own mounts but worried about getting it mounted perfectly perpendicular on the plate. Any suggestions?

One other thing - the Makita will run slower but they warn running it at low speeds for long amounts of time may damage the router. Wonder if that is why the Dewalts seem to be hard on brushes as most are running them on the bottom setting.

See how for out the bottom of the mount Dewalt is. 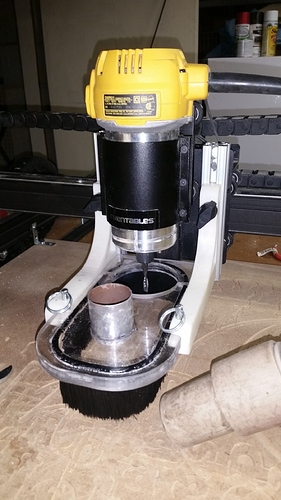 Now look at the Makita - 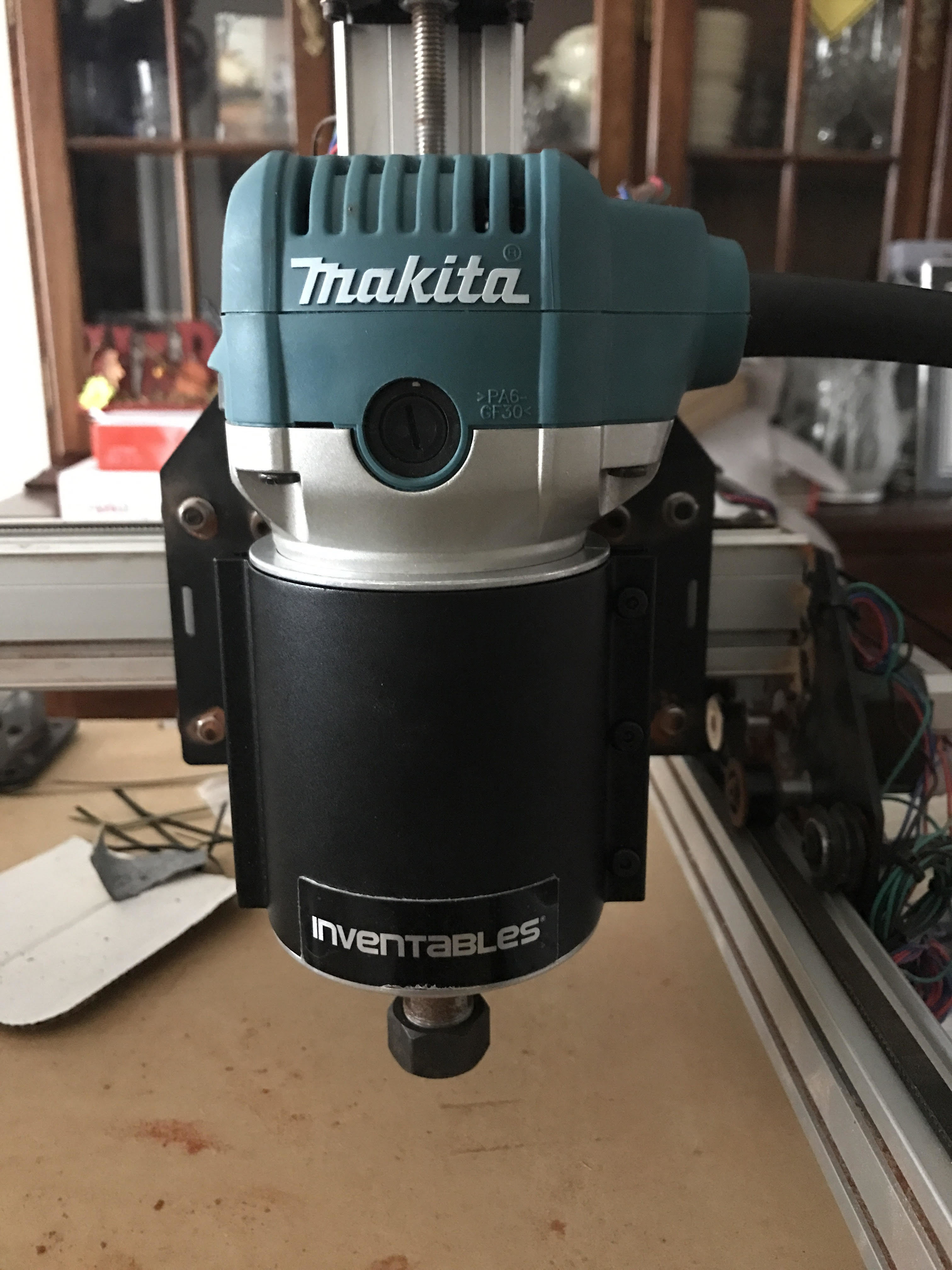 Can you change bits on the Makita while its in the mount?

I have over 100hrs on my Makita plus two pairs of new pair of brushes as back-up, I’ll check tonite how much the used ones are worn down.

Pli Johnson - My concern is not milling it but getting it attached perfectly square to the plate. Guess I need to just go for it and see how it works out.

JustinBusby - Bit changes are no problem. I use the larger of the two included wrenches and the built in push button. With the dust shoe arms it is a little cramped but still totally workable.

Why not use the setup I suggested above? I am still doing maintenance on my machine, but I fully expect the Makita to do very nicely, it will definitely be an upgrade from my Dremel in the original Universal Tool Holder. 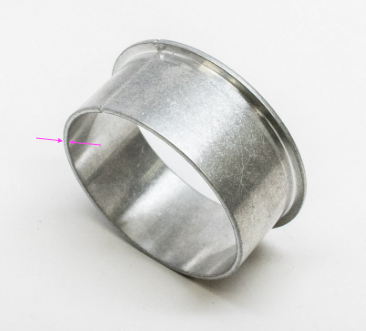 what is the thick of the spacer

I am even more confused. I linked the adapter collar from Carbide3d’s webstore. They sell a collar fits perfectly, it makes it a super snug and perfect fit. I bought two to make sure I had no play top or bottom, and I am very pleased. I doubt there is a more secure way to mount a Makita to the SO2/X-Carve.

Take note of the front on picture of the Makita mounted above, you will notice the aluminum cap on top of the aluminum DW611 mount, that is the spacer.