I have been active for some time on this board but have not had any decent images to show for until now - so now I wanted to share my simple project. A year or so ago I knew nothing about CNC / machining.

The Carve is DIY and I have had a low cost approach, the only real money going into this have been the SBR16 railing, ACME T8 rods, Nema23´s and Makita router. The rest is wood/parts I had on hand already.
This is actually v2, v1 used drawer slides for Y-axis - which worked surprisingly well. I have experienced most of the failings of a CNC, one issue solved lead to another but this endeavour have been mainly for fun/learning experience.
Up until now I have used a generic Arduino/shield with DV8825´s but have now built a proper CNC-controller. Drivers used is TB6560´s which cost almost nothing, time will tell how they hold up

There are still issues to be improved, the machine can always become more rigid but it is waaaay better than my initial attempts. Anyways, here are some images showing status quo 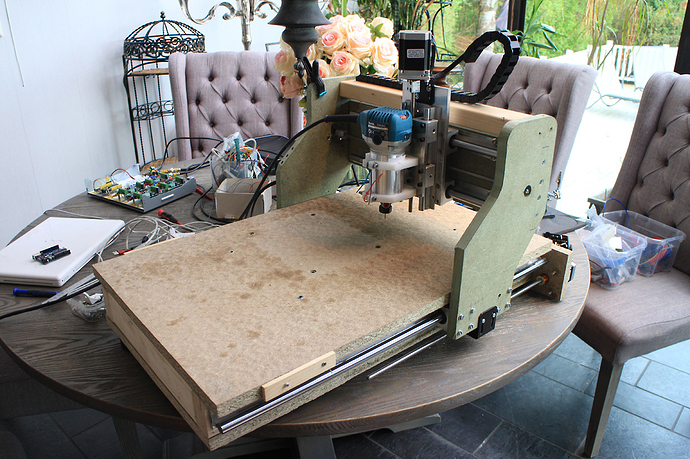 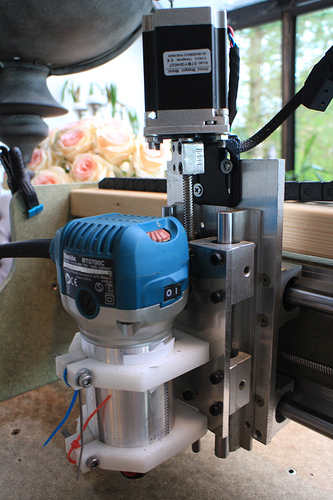 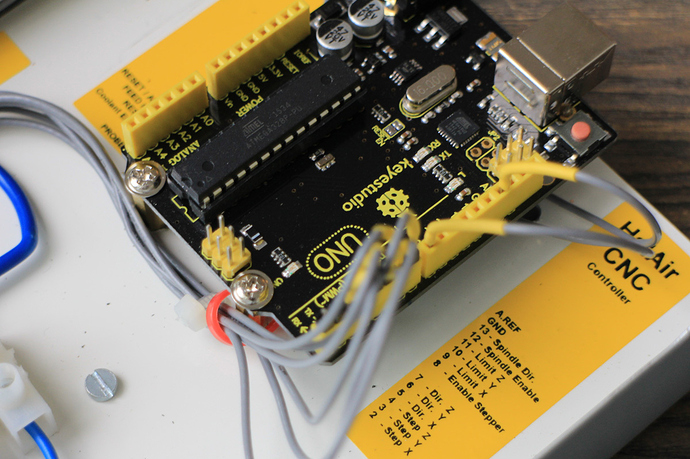 I understand the approach, when I left school a typical CAD station would cost more than a house and even in your dreams you would never have a CNC machine at home. Before taking the plunge I wanted to know if I was smart enough to get it running. My DIY-carve never made a carve, a flatbed scanner and an old HP printer supplied the parts. It took some fiddling with the steps per mm but after a couple of days it would do ShapeOko2 with a pencil, very very slow. Once completed I ordered a ShapeOko2 and never regretted that decision. 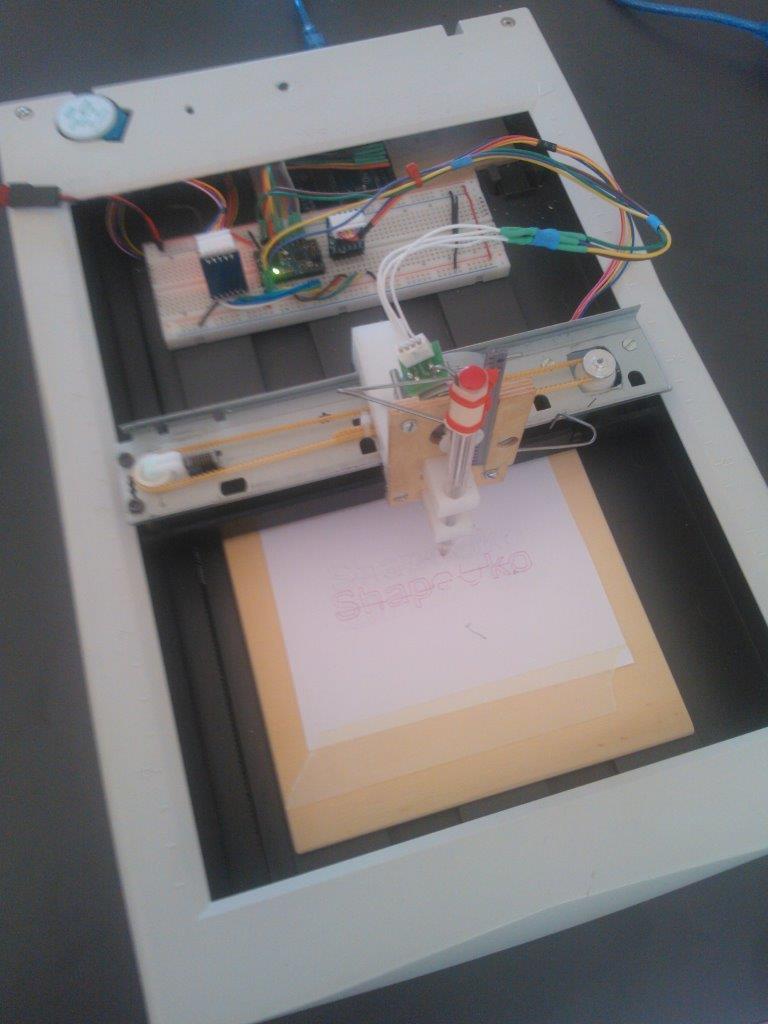 It all start somewhere

My journey startet three years ago when I wanted to make camera slider rigs and got myself an Ardunio, got distracted and built myself a set of speakers, a 50W class A stereo amplifier, a flight computer which needed an alumininum front frame => enter CNC world

The Arduino was on hand already, Gshield and Nema17’s easy/cheap to get and that ball started rolling.

After having everything assembled and testing/verifying all work as intended I tried to make an actual carve.
I would hear the very first motor power-up sound before USB-connection dropped out causing => “Carve finished, success or not so much…?”
I checked that my PSU is sufficiently large to handle the inrush, tried a bigger one just to be safe => same.
Every attempt to carve would halt immideately after the steppers startet to engange the mechanics.
At this time I was only feeding power to the Arduino with the USB-connection.

I hooked up a regular 12V PSU to the Arduino power input -> no interupts.
Had a DC-DC converter and dialed it down to 12V output and placed this parallell to the main 24V PSU, powering the Arduino. All good, it has been solid with no drop-outs since

Previously I used a std G-Shield which provide additional power to the Arduino and didnt consider this when taking the actual shield out of the chain. Jogging/calibration of travel etc worked just fine without drop-outs, it was when I hit Carve it would drop out.

Coming together again after some component swaps / general improving.
Knock on wood, not skipping any steps or job interrupts

What’s your cooling solution? Some sort of DIY mist?

Btw, the camera angle might be misleading, but your adaptive cut looks a lot deeper than 3mm.

For the time being air only, but for the video I ran it dry/no air.
I have a mister I intend to incorporate soon.

Btw, the camera angle might be misleading, but your adaptive cut looks a lot deeper than 3mm.

I have tried 9mm DoC/0.3mmWoC @900mm/min but it is a little to aggressive at the moment.
The recorded settings didnt seem to load the machine/mechanics much at all

What bit dia, # of flutes and RPM did you try at 9mm deep?

What bit dia, # of flutes and RPM did you try at 9mm deep?

I really havent started to experiement with feed/speeds yet - just havent had the time to do it.

The reason I am asking is that since you have a cut that works, you have a good basis (chipload & MRR) to keep and experiment with the other variables. Same chipload and MRR => same heat dissipation, same wattage, same chatter, same rigidity requirements.

For example, if this works:

you could try with the same bit

The downside of making very slim cuts (but still at the same chipload => will not rub) is that you will end up with huge amounts of code. Your CAM will take a while to generate it too.

As an alternative, see what happens if you drop some flutes:

This is a workaround when using a router (i.e. not being able to drop your min RPM low enough). You could still use your tool if you could drop down to 3333RPMs:

Very helpful, and I do see a VDF spindle in my future

I appreciate the info! 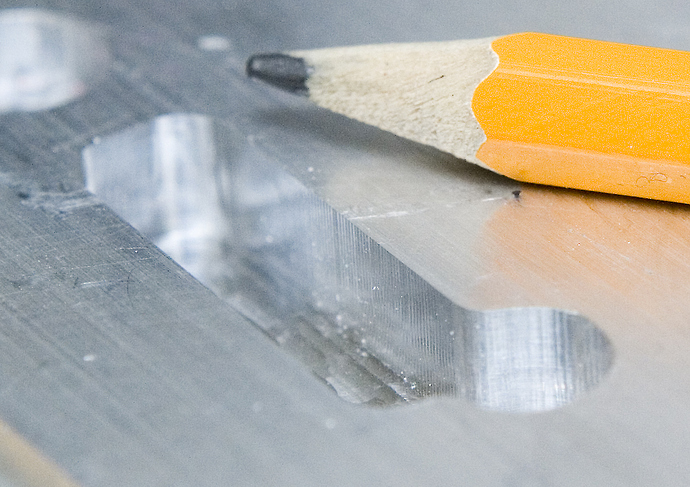 Tried a brief test yesterday after playing with numbers.

Worked quite well except the bit gobbed up with alu after a couple of minutes, I could hear it load up.
Tried a new bit with same settings but added the mister with air + denatured alcohol. Worked better this time.
Nice big (relative speaking) chips during both tests

The big bonus of course is what you mentioned regarding amount of g-code generation, took must less time to generate

The downside seem to be a smaller sweetspot as my baseline was done fully dry, with no apparent build-up. But very interesting excerise

short version:
Watch out! Trying to be conservative it seems that you ended up rubbing!

long version:
If you have a working chipload, you cannot just drop your feedrate to drop your material removal rate (MRR). If you suspect that the MRR is too demanding for your setup (machine & endmill & material & workholding) and wish to try a lower MRR, you need to take into account your chipload too. If you had a good chipload, try to maintain it. If your chipload becomes too low bad things start happening. Instead of cutting you might start rubbing. This in turn will increase the heat, which could cause aluminum to melt and gum up your flutes, which might eventually break your cutter if you keep on going.

To keep things less complicated, in the previous post we did not mention a rather important variable. Well, it’s time to make things more complicated: it’s chip thickness what you are after, not chipload.

Whenever your DoC is greater or equal to half your cutter diameter, then chip thickness and chipload are equal.

However, if your DoC is less than half your cutter diameter, the chip thickness is smaller than the chipload.

In effect you experimented with the same MRR but cut your chip thickness by more than half. I ran the numbers in GWizard too and, surprise-surprise, the rubbing warning showed up.

Perfect, I just made a spreadsheet and will play with the numbers again and keep an eye out for ChipThickness (Ct)

Hmm… @EliasPolitis I can’t get Chip Thickness to compute… What am I missing?
I am not strong in Excel

I was thinking of making a javascript version online with selectable input and output variables. Maybe in a parallel universe where days have 25 hours.

Maybe in a parallel universe where days have 25 hours.

I´d settle for an 8th day per week

Thank you again, this have been very helpful / insightful

Thanks, it have been a fun build & very educational!

@EliasPolitis
I will perform the following test with a fixed set of FR/WoC with my go-to 3mm 3F end mill. The intent is to find an acceptable MRR based on a target Chipload / thickness value.
DoC Single pass = 1,2, 3…,7, 8mm per pocket, the Chipload/thickness remain equal but MRR increase obviously.
MRR will range from 0,48-3,84cm^3/min if allowed to run the full carve 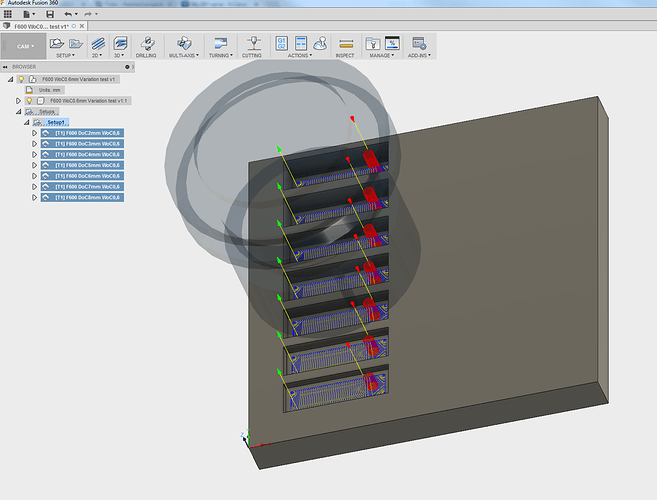