So far assembly has been going really well, with the instruction’s images being quite accurate, which is why now I’ve got to a part where the images differ, I’m a bit confused / worried.

In the instructions for the 750mm X-Carve X-Controller ( http://x-carve-instructions.inventables.com/750mm/step8/ ) the connection for the ribbon cable on the Power Supply Interface PCB looks like the following (with the slot towards the power supply) 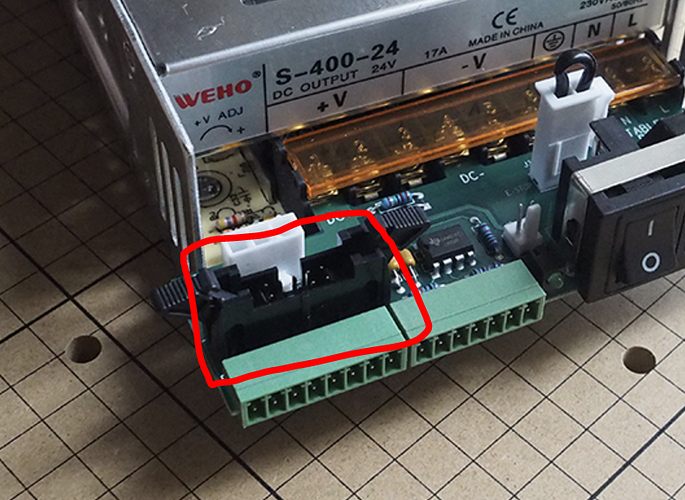 Whereas on my board the connection is reversed 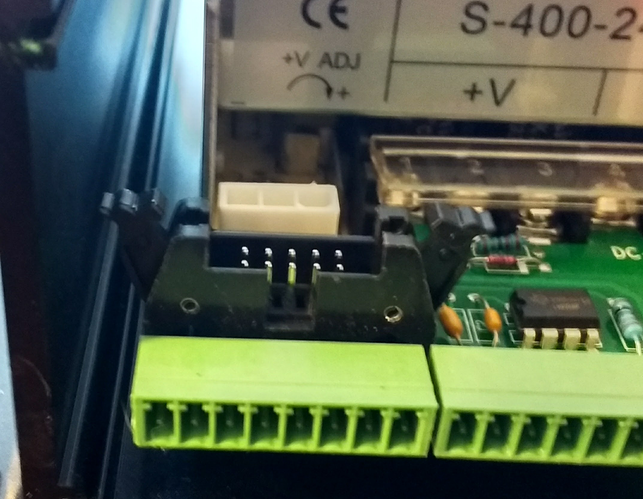 So, the ribbon cable has to be connected in reverse - on the instructions the red wire is to the right: 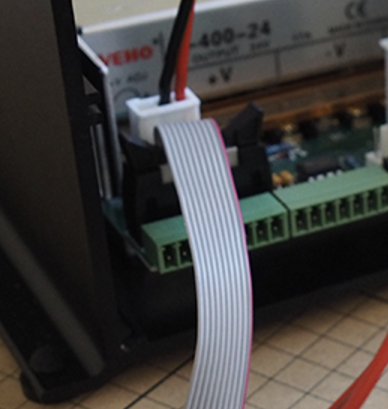 And on mine, it is on the left: 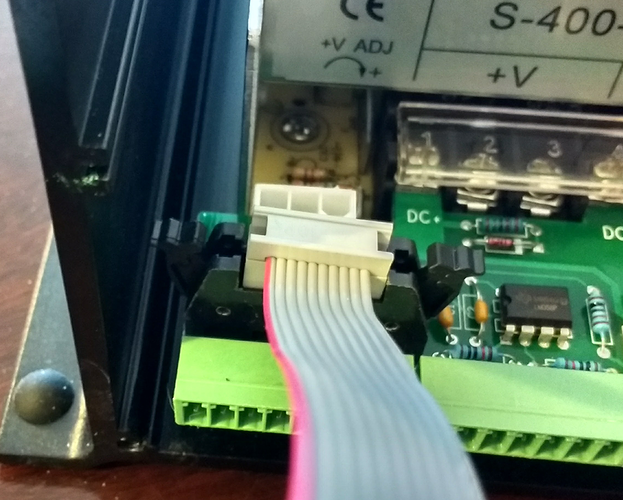 I don’t want to go any further with the build at the moment as I don’t really want to risk damaging anything if the connector / wiring is wrong on my PCBs.

Did anyone else have the same issue / orientation? Which is correct - my board or the board on the instructions?

Thanks for any help / advice

Mine matched the instructions…I’d call Inventables support once they opened. 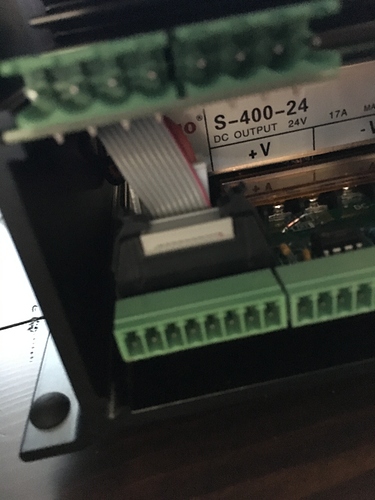 Out of curiosity, does the ribbon connector on the main XController board (the other side from the power supply board) match the instructions picture? Here’s mine: 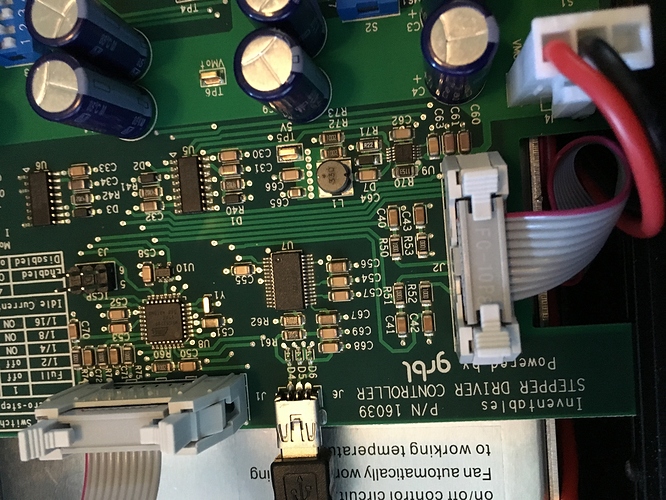 Yes the ribbon cable on the other board matched the instructions picture. If both were rotated / different then I would have probably carried on and assumed it was a new design or something, but just one of them different got me thinking.

I believe if you use the connector on the other end of the cable it will be positioned properly. Mine weren’t the same on each end.

On electronic devices with ribbon cable, I have always found that the ribbon cable with the red wire is pin one. if you look close to the connector there is usually a number one (1) stamped on the board indicating where the red wire (pin one) wire should go.

They will only plug in one way as the connector has a notch in it the matches up to the connector in the ribbon , the cable have to be twisted once to make the connection , just finished my machine 2 days ago everything works just plug them in they only fit one way .

That’s the issue, unfortunately. The cable will only go in the one way - but it’s different to the way shown in the instructions - so either the board has changed recently and the instructions haven’t - or the connection on my board has been attached the wrong way around and putting the cable in that way may damage something / not work at all

Got a support email in - waiting for it to be picked up, though it’ll prob be after the holidays.

Yep, it could be that the connector was soldered to the board facing the wrong way. Yikes!

Unless the pin-out on the board changed you could try the following if you are comfortable with electronics:

Here is a simple illustration (my apologies, it is a pretty crappy paint mock-up) to show what is going on when the connector is rotated.

You should test it afterwards using a meter from point to point one board to the other. Obviously this would be at your own risk, but it should resolve the connector being reversed.

Feel free to disregard this completely and wait for Inventables to figure out why your setup is different.

Brandon’s right. It’s a fairly easy process to swap the cable over. If you do, label that cable so you know its been reversed so you don’t end up using it someplace else in the future and not remember. Otherwise you may connect it to something and fry those components.

Inventables support have come back and say:

They say the clip can be facing either direction; it does not make a difference on the board. In other words, as long as your ribbon fits into the clip, you should be fine even though it is orientated the other way.

So I’ve connected it up the only way it will fit (without modification) at the moment - not powered it up yet, but I guess we’ll see if it works soon (as soon as I’ve finished some other bits).

That’s what I’d think to, yes - but in this case apparently not - the red wire (assuming that’s pin one) will be diagonally opposite.

I’ll plug in the power later and switch it on and see what happens - I haven’t got the stepper motors wired up so can’t test that part yet.

Best you can do is connect it as instructed and see if it works. If it doesn’t work, then go back to them.

Normally, ribbon cables are configured with pin 1 on the right side if the tab is facing up, however, as mentioned, you could flip the ribbon over. The shroud will only accept the cable one way. But, as shown below, the ribbon can be oriented to extend from the tab side or plain side of the adapter which makes it easier to plug in a cable depending on your circuit board arrangement. 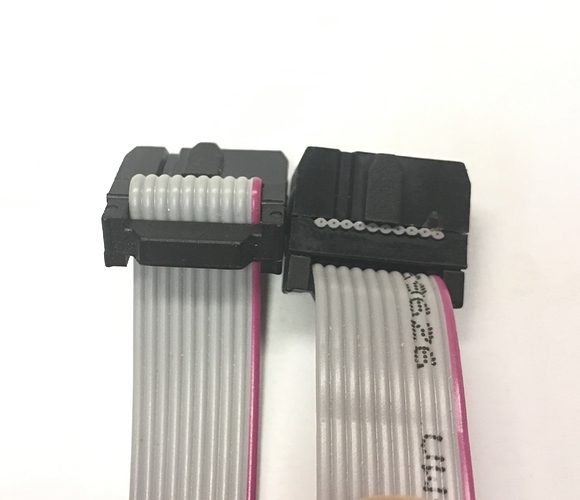 A quick update -
I wired the boards up with the ribbon cable in the orientation dictated by the connector (as suggested by Inventables ) and switched it on.

Nothing went bang as far as I could see, but I wasn’t convinced things were going to work the way they should so I dismantled everything again, got the multimeter out and did some continuity tests. The results are below ( please forgive rough sketching 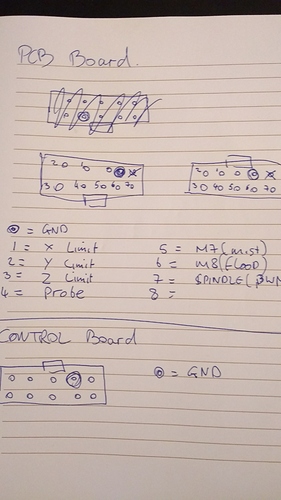 *Ignore the crossed out box

The top is for the Power PCB board, The top left box is the orientation of the connector on my board, the top right is how it would be with the connector the other way around (as per instructions) - pins would be the same. The important one is the GND which links to all the GND connectors on the back of the x-controller.

I then tried to find the same GND pin on the main board using the USB connector to provide GND for continuity testing. This can be seen in the bottom box.

So, it’s definitely just the connector that’s the wrong way around. I grabbed some Sparkfun cable and connectors and made up my own cable with the orientation I needed, connected them together and tested the continuity between a GND connection on the Power PCB board and the USB connector on the control board and it looks like it’s connected correctly now.

I haven’t attached any other cables yet (that’s for later) but hopefully nothing has died after that first switch on with the cable in the wrong way.

My Christmas gifted XC is still on order. Hopefully they’ll sort this out before it gets shipped.

The new cable worked fine - the X, Y and Z homing switches all registered when hit, so it looks like nothing was zapped.

Had an interesting initial moment when all of the stepper motors where initially running in reverse despite the wiring of them being the same as in the instructions diagram, so I just flipped the green and black wires on all of them to get them running in the right direction. 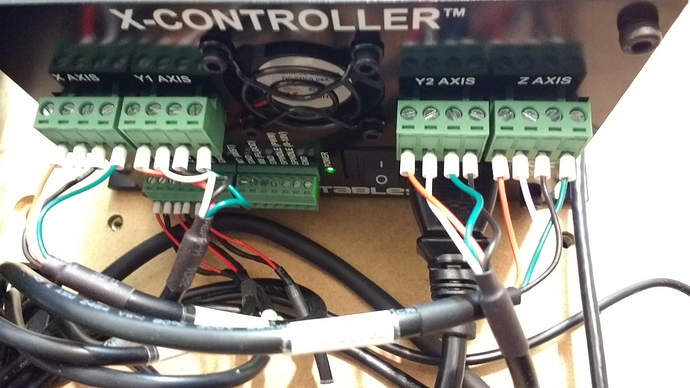 As a side question, after homing the X (right at the end of the video above) it moves away from home then back again with a chuddering motor sound - does this sound normal to those who have been up and running for longer than me?